When we think of 3D printing in the traditional sense, we typically imagine small to large pieces of machinery following computer code in order to fabricate precisely constructed objects. These machines are capable of printing material in such small layers that they can sometimes almost be impossible to detect with the human eye. The technology is leading to perfectly fabricated prototypes and even end-use products. At the same time, designers and artists are using it to create completely unique works of art. While some may argue that using a computer to create “perfect” artwork isn’t artwork at all, for one woman named Birta Rós Brynjólfsdóttir, she has found a way to build a machine that actually is imperfect, one that requires human interaction to create astonishing artwork unlike anything seen before. The process? She calls it Vaxandi, and it is about as unique of a 3D printing method as you will ever see.

Vaxandi, as Birta tells 3DPrint.com, is a “craft.” It was developed during a two-month research project in a material-based course at the Iceland Academy of the Arts (IAA), run by Garðar Eyjólfsson. The method uses two materials, wax and water, both of which are poured into a container at the same time. The water acts as an agent to pull the wax to the surface while also cooling and solidifying it. This happens in layers, very similar to how a 3D printer works. The shape, size, and thickness of the object being “printed” are controlled by various factors including the flow of both materials as well as where the user decides to manually “extrude” the wax. “Partly controlled and partly dictated by the material flow, the shapes of Vaxandi vessels have an organic quality, reminding of natural rock formations,” Birta tells 3DPrint.com. “The whole process is manual, both the control of wax and water. I started out trying the method out in a sink, but later moved into a bigger container and then got some help from friends to control the water flow. You can control the structure by how much wax you pour in the water with the syringe bag. If you just pour a little it gets smaller, but if you pour more in it gets bigger.” The project didn’t originally start with Birta using wax and water to create her manual 3D printing method. Instead she started with metals and plastics, before moving on to try to combine plastic with heat, and then plastic with water. When she realized her progress wasn’t taking her anywhere, she decided to try using wax and water. As the project continued, she experimented with different methods of creating wax structures, including a method of rotation molding, where she tried to control and form the wax within a mold. In this seemingly never-ending series of experimentation, she realized that she was constantly using water, time and time again, to cool and harden her wax.

“I started melting the wax and pouring it into water but struggled for control because the wax just floated on the water’s surface,” Birta tells us. “Because wax is lighter than water, it will always seek the surface if poured in. By simultaneously pouring wax and water in a container I was able to make a structure. I use a metal plate with a few holes in it to keep the structure grounded. As the structure gets bigger the water pressure has more effect. The water sucks the structure up and the stream pulls it with itself so the structure begins to rotate.”

Birta heats the wax by putting it into a heat-proof vessel and then submerging it in hot water. Once melted, it is poured into a syringe bag and is ready for manual extrusion. The gradual cooling of the wax in various layers reminds Birta of natural rock formations, and she sums up the process by calling it a “low-tech translation of 3D printing.” We’ll leave it up to you to decide. When the structure has been completely fabricated under the pressure of water, Birta tells us that the core of the object still remains hot and in liquid form. In order to finish off her design, she must cut the top of the object off, and then pour the remaining hot wax out of it. This leaves a hollow, lightweight structure, manually printed in wax. The structures that she has created so far measure approximately 10-40 cm in height.

Birta, 22, is currently based in Reykjavik, Iceland, and is studying design at IAA. She’s not exactly sure where this project will take her, but we have a feeling she has a bright future ahead of her.

“This is a work in process and it is something I could see myself working on in the future, during my studies or after I graduate,” she tells us. “I like to experiment with all kinds of things and materials to see what I can get out of it. This project ‘screams’ endless possibilities. This is definitely something I would like to work on, continue developing the method and explore other materials to apply to the method to. “

What do you think about this unique manual method of 3D printing? Is there a future for Vaxandi? Discuss in the Vaxandi forum thread on 3DPB.com. Check out the video and some additional photos of Birta’s creations below. 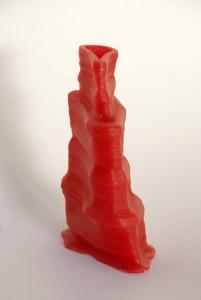 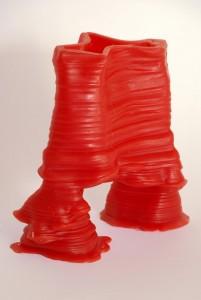 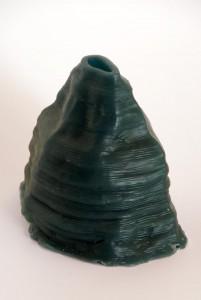