It’s always easier for doctors, surgeons, and nurses to perform a procedure on a patient if they’ve practiced it a time or two. We’ve seen 3D printed medical simulators for all sorts of medical procedures, from inserting IVs and suturing to intubating an airway and performing a keyhole surgery on a baby. However, this has not always been the case for anesthesiology.

Procedural training for anesthesiology residents typically takes place as a part of patient care – not when the primary objective is actually learning the procedure. This is probably extremely nerve-wracking for both the patient and the student, and while there are commercially available simulators and phantoms for neuraxial (spinal and epidural) anesthesia training, they’re too expensive to implement on a widespread basis. Final 3D model of a neuraxial simulator before 3D printing.

But a group of researchers from hospitals and universities all over the world has been working to change this, and recently published a paper, titled “Low-cost three-dimensional printed phantom for neuraxial anesthesia training: Development and comparison to a commercial model,” about their work developing an inexpensive, 3D printable neuraxial anesthesia phantom through the use of free/libre/open-source (FLOS) software, and comparing the phantom to a commercially available simulator model.

The paper’s abstract reads, “Neuraxial anesthesia (spinal and epidural anesthesia) procedures have significant learning curves and have been traditionally taught at the bed side, exposing patients to the increased risk associated with procedures done by novices. Simulation based medical education allows trainees to repeatedly practice and hone their skills prior to patient interaction. Wide-spread adoption of simulation-based medical education for procedural teaching has been slow due to the expense and limited variety of commercially available phantoms. Free/Libre/open-source (FLOS) software and desktop 3D printing technologies has enabled the fabrication of low-cost, patient-specific medical phantoms. However, few studies have evaluated the performance of these devices compared to commercially available phantoms. This paper describes the fabrication of a low-cost 3D printed neuraxial phantom based on computed tomorography (CT) scan data, and expert validation data comparing this phantom to a commercially available model.”

The thing that makes simulating neuraxial anesthesia so tricky is that it is based mainly on tactile feedback, supplemented with ultrasound imaging from before the procedure. So any simulators, 3D printed or otherwise, need to be pretty realistic to do any good. The team used data from CT scans to create a 3D model of the lumbar spine, which was then modified, put inside a digitally designed housing unit, and 3D printed out of PLA on a desktop system. “Simulation has the potential to improve procedural training by allowing trainees to acquire proficiency in a realistic environment where the only consequence of error is learning,” the researchers wrote. “This allows trainees to become “experienced novices” before clinical procedural practice.” ITK-SNAP interface after segmentation of the spine with the automated active contour tool.
Each colour represents a different layer-mask indicating different regions for the segmented 3D model.

The team filled the model with an echogenic solution of gelatin with psyllium fiber, and once it had been properly heated up and cooled down a few times to increase stiffness, 22 staff anesthesiologists performed a spinal procedure and an epidural, first on the 3D printed simulator and then on a commercially available Simulab phantom, then evaluated the tactile and ultrasound imaging fidelity of each.

However, it was noted that the study does have a few limitations, including the fact that the participants could not be blinded due to the obvious differences in appearance between the models. Additionally, only experienced faculty members were able to test the 3D printed simulator, not trainees.

“The 3D printed phantom also had three major limitations,” the researchers wrote. “First, there was a lack of realism in surface palpitation due to the softness of the gelatin solution used. Second, the perishable nature of the gelatin and psyllium media means that a new batch of gelatin would need to be created repeatedly—a time consuming process. Third, needle track marks persisted in the models after use. These issues will likely be addressed by the substitution of a ballistic gel (Clear Ballistics, Fort Smith, AR, USA) in place of gelatin.” 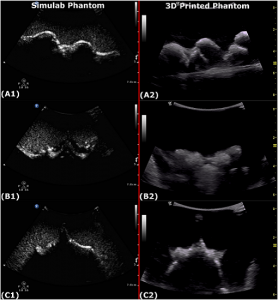 Ultrasound images of the Simulab and 3D printed phantoms.

While ultimately, the 3D printed phantom was less realistic than the Simulab phantom to surface palpation because of how fragile the silicone was, it had far better fidelity in terms of dural puncture, ultrasound imaging, and loss of resistance.

In addition, it only cost $13 to 3D print the neuraxial phantom, with 25 hours of non-supervised 3D printing and two hours to assemble it – much less money and cost than it takes to fabricate the Simulab phantom.