As part of a three-year program called Automated Construction of Expeditionary Structures (ACES), last year the US Army 3D printed a complete barracks, also known as a B-Hut, out of a patented concrete mixture. The program is researching 3D printing as a way to build semi-permanent structures out of concrete, made from locally available materials – the goal is to reduce the amount of building materials that need to be shipped out by half, and decrease construction manpower requirements by 62%, when compared to expedient plywood construction. Last week I was invited out to the Engineer Research and Development Center’s Construction Engineering Research Laboratory (CERL) in Champaign, Illinois for a live demonstration of the ACES technology…an invitation I was happy to accept. Last year’s B-hut took 21.5 hours to print, but that’s the total number of print hours, and wasn’t continuous. This time, the ACES team, with assistance from its project partner – Chicago-based architectural and engineering firm Skidmore, Owings, and Merrill (SOM) – and Marines from the 1st Marine Expeditionary Force, was going to attempt something new.

The ambitious plan was to complete the two halves of another barracks structure, completely out in the open and not covered by a tent, in 24 hours of continuous 3D printing. What moves the demonstration from ambitious to brave was the team’s decision to invite journalists to see the live print, and I’m not just talking about myself – I saw cameramen and reporters onsite from at least two different local TV stations.

The Marines were briefed on the specifics of the technology ahead of time, and ran the equipment themselves this week, as they will be the ones actually 3D printing the structures in the future if the program is successful. However, the ACES team and SOM were onsite in case they needed to offer any assistance, and that assistance was needed a time or two during the live demonstration. Program manager Michael Case, PhD, told me that an issue with concrete is evaporation drying, so when the forecast showed rain, the start time was moved up a few hours, only to halt again pretty quickly once the team realized that they needed a new pump – the interior of the original one had been torn up by the sharper materials used during a live demonstration at Fort Leonard Wood a few months ago. Then the kinks needed to be worked out of the hose, and when the material didn’t extrude properly after the print began, the team removed the nozzle and discovered that a rock was inside messing up the flow.

The material mixture had to be adjusted after the first layer because it was too sloppy, at one point the nozzle was accidentally sent over to the side that wasn’t being worked on yet, and when steel dowels were added for initial reinforcement to the first several layers of 3D printed concrete, work began on the wrong side. But in spite of these minor setbacks, work continued through the night and Public Affairs Specialist Mike Jazdyk told me that there were very few clogs. On the morning of the second day of printing, Jazdyk told me that the ACES team would not make its original goal of a continuous, 24 hour 3D printed concrete barracks. A lot of this was due to concrete curing inside of the pump, which caused the equipment to shut down and cause some overnight delays. By the time I had to head for home, the team had nearly completed the first half of the structure and was planning to take several hours of much-needed rest before starting in on the second half. Jazdyk informed me that work would begin again around midnight.

I received a call from Jazdyk on Friday afternoon, and he told me that the ACES team had to stop the print due to equipment failure, but that they had managed to complete roughly 80% of the structure before this happened – this is easy to see in the image below. “What you see is 40 hours of printing,” Jazdyk told me about these four photos he sent, noting that this number does not denote a continuous job, but rather is the total number of print hours.

Jazdyk explained that had the equipment not failed, the ACES team at CERL would have finished the structure in less than 48 hours, which is still an extremely impressive feat. As previously mentioned, the fact that the team was willing to have the press onsite for the live demonstration, without knowing for certain if they would make their goal, was valiant. 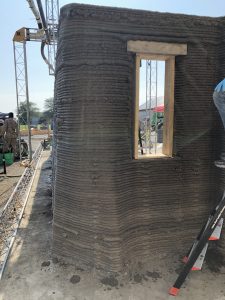 So often with 3D printed construction projects, we are assaulted with people and companies saying, “Look, I’m the first!” or “I did it the fastest!” or “I built the biggest thing in the world!” At CERL this week, everyone I spoke to was very candid with the issues the project was running into, and no one tried to pull the wool over my eyes or move me away if something went awry. People answered every question I asked openly and honestly, even if it was a question relating to something that was currently going wrong – this is admirable.

“No one shows you under the skirts of large-scale concrete 3D printing – all you see are the videos that are posted online of just what people want you to see, and nothing else,” project manager Megan Kreiger told me. “You don’t see all the problems that you have to overcome. They make it look like they’re doing it super fast, super easy, and that they’re doing it under 24 hours, but none of it’s true.”

Team members also shared their hopes for the program with me, like ultimately lowering the cost of materials and the amount of manpower needed, and the potential applications the ACES technology could eventually be used for other than 3D printing buildings, such as culverts, barriers, and bridges, and more humanitarian efforts, like schools.

“There’s a tremendous number of uses,” Dr. Case told me. Jazdyk told me today that they will attempt to complete the 3D printed concrete structure next week at CERL. I am confident that they will succeed, but, knocking on wood and knowing that sometimes things just go wrong, I am also confident that should more problems arise, the ACES team will handle them with grace, learn from them, and keep on trucking.

Stay tuned to 3DPrint.com for more news about my recent visit to CERL, including plenty of information that I did not previously know about concrete and the importance of the shape of these 3D printed walls.