For the first time ever, Congress has passed a law that makes the misappropriation of trade secrets subject to a federal civil claim. On May 11, 2016, President Obama signed the Defend Trade Secrets Act (the “Act”)[1], which grants a party the right to sue in federal court for theft of trade secrets. If this sounds pretty late in the game to you, you are right. Previously, theft of trade secrets was governed by state law, with most states adopting some version of the Uniform Trade Secrets Act (“UTSA”). Unlike patent and copyright protection, trade secrets are not specified in the Constitution as a right to be bestowed by Congress. While the new federal law does not preempt state law, it provides trade secret holders access to federal jurisdiction. There are a number of ways to protect trade secrets. First, limit access to the information to those who “need to know.”  Second, create secured areas for critical manufacturing and/or processing technology. Third, ensure information is encrypted and/or computer access is otherwise restricted. Finally, have employees execute an employment agreement setting forth their duties with respect to the trade secret information. Also, do not forget about “visitors.” Many companies have visitors sign in upon entering a facility. In certain instances, it may be appropriate to restrict the use of cell phones (and cameras) in certain areas.

Considering that it takes years before a patent may issue, and the fact that a design may be scanned and duplicated in a matter of hours with advances in additive manufacturing, the new Act provides additional protection. It is another tool to apply to overall intellectual property protection.

There are some caveats, however. The Act provides for immunity from liability in certain circumstances. For example, an individual will not be held criminally or civilly liable under any federal or state trade secret law for the disclosure of a trade secret that is made in confidence to a federal, state, or local government official, either directly or indirectly, or to an attorney; and solely for the purpose of reporting or investigating a suspected violation of law; or is made in a Complaint or other document filed in a lawsuit. Likewise, an individual who files a lawsuit for retaliation by an employer for reporting a suspected violation of law may disclose the trade secret to the attorney of the individual and use the trade secret information in the court proceeding. 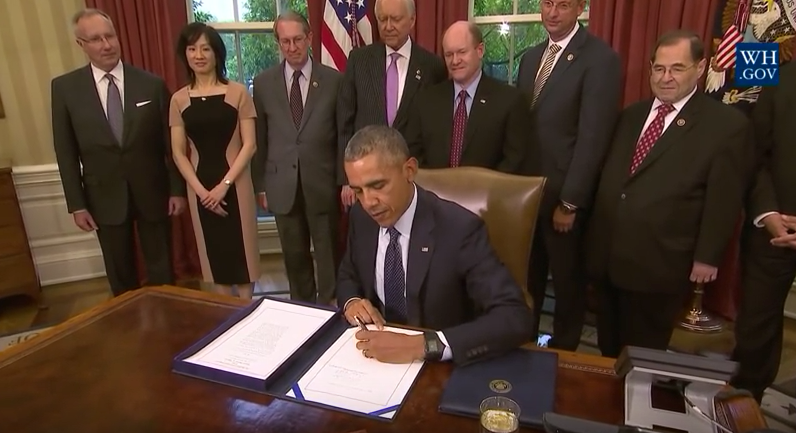 There are also notice provisions required by the Act. An employer must provide notice of the immunities set forth above in any contract or agreement with an employee that governs the use of a trade secret or other confidential information. If the employer fails to provide that notice, it may not be awarded exemplary damages or attorneys’ fees.

A federal cause of action provides plaintiffs with some potential advantages. For example, federal courts are used to hearing complex patent infringement cases, for which they have exclusive jurisdiction. The Courts are experienced in litigations concerning high technology. Additionally, the federal courts have Protective Orders, which routinely address discovery of confidential information, and have recently adopted rules to reduce litigation expenses.

The Act provides civil remedies for trade secret misappropriation, including injunctive relief, damages, and reasonable attorneys’ fees if a claim is made in bad faith, but the Act also includes a highly controversial mechanism for ex parte seizure of misappropriated trade secrets. Under the Act, a plaintiff can seek to have the court seize, without prior notice to the target, any property as is “necessary to prevent the propagation or dissemination of the trade secret.” This does pose a risk of abuse and is accordingly constrained by a number of provisions, including that such seizures are to be used only in defined “extraordinary circumstances.” These extraordinary circumstances include situations where a defendant might flee the country or is planning to immediately disclose the trade secret to a third party. The Act also requires proof that the seizure target has actual possession of the trade secret property. The Act provides a high bar that a plaintiff must meet before a court enters an ex parte Seizure Order. A plaintiff must be wary that the Act also provides a cause of action for any person who suffers damages from a wrongful or excessive seizure. There are many potential pitfalls for the unwary under the Act. First, if you leave an employer and obtain a new position, even if overseas, depending on your job content, you may be subject to accusations of theft of trade secrets under the Act if you are using information you learned while employed at another organization. Likewise, employers need to be concerned that employees coming into their organization are not using information that may be considered trade secret information.

How can you capitalize on your knowledge or your employee’s technical knowledge without running afoul of the Act and being accused of misappropriating trade secrets? Make sure the employee is not working on the exact same technology, i.e. provide work in a different space (this does not mean in a different industry). To the extent that it can be established that the technology existed before the time of employment, a theft of trade secrets case will not survive. Keep detailed notes of what you bring to your employer that you already possessed, negating an inference that you learned it all at the employer. Finally, if an employee is leaving the company, make sure to remind them as part of their exit interview they cannot take trade secrets with them. Companies should also consider obtaining in writing that the employee understands the trade secrets will remain with their employer. It is a good idea to work with legal counsel to find the correct language to reflect this.

Under the Act, the definition of employee includes independent consultants and contractors. In order for the punitive provisions of the Act to apply, i.e. an award of multiple damages and attorneys’ fees for a violation, the employee/independent contractor must have notice of the Act. Thus, it is a good bet to update your existing contracts to comply with the Act. Trade secrets can be identified (generally) in an agreement, leaving little doubt that the information is protected. Documenting trade secret information provides additional certainty if litigation concerning the information should later occur.  A cause of action for theft of trade secrets in violation of the Act will almost certainly include state causes of action and potentially unfair business practices claims which also afford, in certain instances, multiple damages and attorneys’ fees.

Importantly, companies should be aware of the differences between the new Act and the pre-existing state law remedies when deciding where to bring their claim. For example, while the Act and the UTSA provide a similar three-year statute of limitations to bring their claim, some states may have adopted a shorter or longer limitation period. Failure to properly check may result in a company missing their opportunity to bring a trade secret theft to court. Companies should work closely with legal counsel in interpreting the differences between the Act and the UTSA to carefully determine the best course of action.