A lot can be said of gun laws, as there is a never-ending debate over the rules which should be put in place to either allow or restrict individuals from purchasing firearms. Regardless of your beliefs, most of us probably agree that felons should not have the right to own firearms.

Last month, we reported on a story in San Bernardino County, California, where deputies had raided an identity theft ring and found a 3D printer that was in the process of creating a lower receiver for an AR-15 assault rifle. The two individuals who were arrested, were ultimately booked on charges which included “manufacturing a firearm using a 3D printer”. With the recent increase in the popularity for desktop 3D printers, comes the increased chance that we will begin to see more and more individuals fabricating such weapons. It’s not like there are no other means of fabricating these potentially deadly guns, but 3D printing does allow for yet another undetectable method of fabrication.

Today, we learn that two felons in Oregon were arrested and charged with illegally possessing firearms, one of which deputies believe was 3D printed. Nolan DeBell, 42, and Joshua Holloway, 27, were arrested three weeks ago on June 9 when deputies found a large number of illegally-modified and stolen firearms at their house in Chiloquin, Oregon. One of the weapons that was seized was an AR-15 assault rifle, which included a lower receiver that investigators now believe had been 3D printed. The lower receiver is of course a part of the gun that contains the firing mechanism, and is basically what makes the gun “work”.

“Being felons, they could not have purchased the lower receiver,” Detective Eric Shepherd of the Klamath County Sheriff’s Office explained. 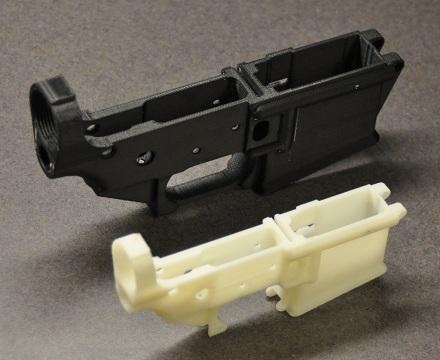 While there continues to be significant talks about making the 3D printing of certain gun parts and other weapons illegal, at the current time it is not. However, there are laws that restrict the possession of, or manufacturing of a firearm that is not detectible by a metal detector or airport security system. Because most desktop 3D printers fabricate objects out of plastic, this lower receiver most definitely would not have been picked up by a metal detector. We certainly don’t want criminals like these men to be 3D printing guns in their homes. However, at the same time, we must understand that it was much more than just a 3D printed gun that these men had in their possession. They also had other illegally obtained weapons as well, which were not 3D printed.

What do you think about this latest case in which a 3D printed weapon was either obtained or fabricated by two felons? Does the idea of 3D printed firearms scare you or do you feel that it is just one more of the many ways in which criminals can get their hands on deadly weapons? Discuss in the 3D Printed AR-15 forum thread on 3DPB.com.