In today’s 3D Printing News Briefs, we’re starting off with news about a special report by Wohlers Associates, Inc., and then moving on to research, as a team of engineers have created custom 3D printed wearable, wireless sensors. Pratt & Whitney’s prototyping arm plans to 3D print an entire jet engine. Finally, 3D printed room dividers and partitions were recently on display at Dutch Design Week. Wohlers Associates, Inc., which recently launched an AM audio series, is well-known for its annual AM industry reports, but recently the independent consulting firm published a special report, “Post-Processing of AM and 3D-Printed Parts,” that describes the expensive, long steps involved in post-processing 3D printed parts, including surface finishing, support removal, heat treatment, and coloring and coating. According to the firm’s 2021 report, almost 27% of the cost of producing 3D printed parts comes from post-processing, which is considered one of the three major phases of printing parts, so it’s a pretty important consideration. This new report details methods and techniques for post-processing that can help organizations save on time and money by reducing the trial and error phases of finishing 3D printed parts.

“When calculating the cost of post-processing, it is critical to consider the entire end-to-end workflow. Bottlenecks are a challenge, especially when scaling into production quantities. The post-processing steps for metal powder bed fusion (PBF) include the removal of powder, thermal stress relief, and the separation of parts and support material from the build plate. They also include the removal of supports from parts, media blasting, and machining and grinding. Some parts may require hot isotropic pressing, additional heat treatment, anodizing, and inspection. If post-processing is not scaled and streamlined accordingly, bottlenecks will occur, especially with large quantities,” Wohlers Associates stated in a press release.

This new report is $595 for a single-user digital license, though you can save $300 by purchasing it as a bundle with Wohlers Report 2021. University of Arizona engineers have developed a way to 3D-print medical-grade wearable devices, such as this one, based on body scans of the wearer. (Image courtesy of Philipp Gutruf, College of Engineering)

Engineers from the University of Arizona have developed a biosymbiotic device—a custom 3D printed wearable sensor, based on body scans, that has novel features and doesn’t need to be charged, thanks to a combination of small energy storage and wireless power transfer. The team, led by assistant professor of biomedical engineering Philipp Gutruf, a member of the university’s BIO5 Institute, recently published a paper about their device, which doesn’t require any adhesive to wrap around different body parts. Using 3D scans of the wearer’s body, from methods like CTs and MRIs, the team can print a lightweight, custom-fitted wearable sensor, allowing researchers to assess physiological markers that were previously very difficult to get to because of the limited areas in which the sensors could be placed. Because these 3D printed devices have a very precise fit, they’re extremely sensitive when measuring characteristics like strain and temperature when subjects in a study were walking on a treadmill, jumping, and using a rowing machine.

“There’s nothing like this out there. We introduce a completely new concept of tailoring a device directly to a person and using wireless power casting to allow the device to operate 24/7 without ever needing to recharge,” said Gutruf, the Craig M. Berge Faculty Fellow at the College of Engineering.

“These devices are designed to require no interaction with the wearer. It’s as simple as putting the device on. Then you forget about it, and it does its job.” Moving on, aerospace manufacturer Pratt & Whitney‘s prototyping arm, GatorWorks, is on a mission to produce a whole TJ-150 turbine completely out of 3D printed parts. To take advantage of the US Air Force’s continuing demand for less expensive powered glide bombs, cruise missiles, and “attritable” UAVs, the team’s current focus is 3D printing low-cost military jet engines, like the TJ-150, a 150lb-thrust turbine engine that powers small cruise missiles, like the Raytheon Miniature Air-Launched Decoy and the MBDA Spear air-to-surface missile. P&W believes that, through 3D printing, the number of parts making up the TJ-150 can be reduced from 400 to about six, while also saving time by not subcontracting the work, and cutting the cost of the process in half. GatorWorks hopes to roll out the 3D printed TJ-150 jet engine by the end of the year.

“We need to create the opportunities for our engineers to learn, and not put ourselves in a situation where the stakes are so high that we have to be so conservative that we can’t take calculated risks,” said Dave Stagney, senior director of P&W’s GatorWorks.

“Right now, if we want to do an iteration, we’ve got hard tooling that’s about a 12-month lead time. If we can do additive, we can eliminate that lead time and print new configurations in a couple of weeks.” 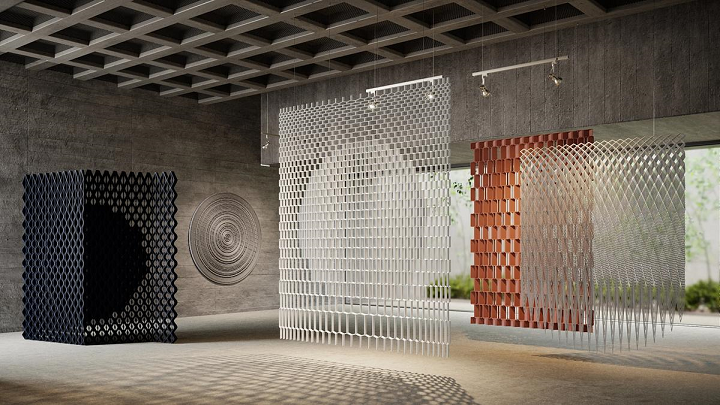 Finally, Dutch additive design firm Aectual, known for its 3D printed architectural and interior products, launched a collection of 3D printed office partition screens and room dividers at the recent Dutch Design Week 2021. Designed by architecture firm House of DUS and a collaboration between interior designers Roos Meeder and Michiel Wijnen, the products are all part of Aectual’s Circular Service, which means that customers receive cash back when they’re returned to be recycled and printed into new products. The dividers, which are great for a variety of settings from restaurants and hotels to private homes and offices, are available standard in 17 different colors, and for an additional cost, can be made in any Pantone, NSC, or RAL color. Additionally, several of the partitions were designed to create a graphical spatial effect, which allows for more transparency or privacy by playing with recurring square and oval shapes.

“We love it that the screens can be used both as art piece as well as functional object,” said Martine de Wit with House of DUS. “At my home it hangs on the wall, but just as well at the office it brings a specific softness as a room divider.”