The interest in 3D printed concrete continues to skyrocket – after all, who wouldn’t be interested in a solution that could allow for extremely rapid construction of structures like bridges and houses? Researchers are also looking into using 3D printed reinforced concrete, including a trio of thesis students from the University of Stuttgart‘s Institute for Computational Design. For their thesis preparation project, Hosna Shayani, Marie Razzhivina, and Jacob Zindroski published a paper titled “Fabrication strategies for precise application of reinforcement in 3D-printed concrete” that discussed their ReCrete project, which aims to use tailored reinforcement to “expand the design space of 3D printed concrete.”

“Concrete is at a technological crossroad,” the paper states. “The implementation of the material has not relatively changed in the last century in its use, with the exception of the last twenty years. Concrete 3D printing is the answer to the materials advancement for future applications. What we seek in this research is to expand the design space of 3D printed concrete (3DCP) through tailored reinforcement. This would begin to bridge the initial design process closer to its ultimate realization.”

The team’s work falls under digital and physical categories, such as the design process, fabrication of a robotic tool and simulation; they did not look deeply into design parametrization, new materials, or structural performance of prototypes.

They explained the relevance of their topic in terms of:

“Currently design has two greater purposes it must serve before it can be produced,” the researchers wrote. “With the current capabilities of the tools we as architects can use, we need to be aware of the potentials and understand the expectations of the production of large scale geometries, either through specific geometric creation or optimized designs.” While we have the tools create a multitude of forms and geometries, the team noted that we have to consider fabrication “at a fundamental level” during development. Concrete has been around for a very long time, and gives designers more freedom than materials such as stone.

“Choosing to work with concrete for our research was partially based on its wide use and high consumption. What we seek is to further optimize the use of the material as it is related to the construction process. Some of the important characteristics of concrete that need to be considered is its intrinsic behavior,” the researchers explained. Concrete is less expensive, and has good compressive strength, but it fails if any tensile force is exerted on it. So the team wanted to explore how to improve the material’s tensile properties, as well as “the optimization and improvement of complex geometric forms.”

“What 3DCP can give the designers is command over how the material is implemented. No longer will molds be the determining factor of complex geometric morphologies. We can now leverage a technology that can begin to assert itself as a more finite process,” the team stated.

“Not only that but if 3DCP becomes a finite process, then you remove the time it takes to complete a project. As a result what could typically take months in production can be completed in days depending on the complexity. The mold, scaffolding, and physical labor is removed. 3DCP is the emancipation that designers need for future construction methods.”

However, as we know, 3DCP is not without its problems – limited to its own buildability angles because of its properties, the material takes longer to set and hold shape, and angles lower than 60° require support material for direct printing. How the research intends to situate itself.

At the moment, the materials used to reinforce concrete are inmixed or continuous steel rebar, but the researchers are interested in using segmented steel instead, and having it inserted during the 3D printing process itself, as opposed to a post-processing task.

“The method in which we see this being accomplished is through the use of a robotic tool alongside the printing process. Using a typical FDM method this research is attempting to create an all in one operation, of printing while reinforcing. The reinforcement will happen simultaneous to the printing. What we seek from this procedure is the inclusion of tensile elements in the printing process, for the simultaneous mechanism allows for continuous construction without slowing the printing time.” 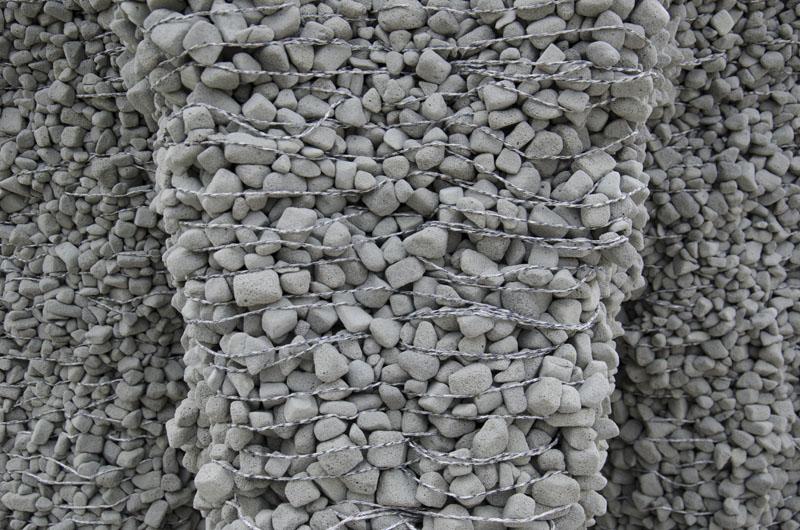 The researchers listed some examples of 3D printed reinforced concrete currently being worked on by the likes of companies like Apis Cor and Contour Crafting and research institutes such as ETH Zurich.

After looking at these examples, they concluded that their structure for reinforcement should be both segmented and tailored. “Fragments of reinforcement would ideally be placed into freshly deposited layers of concrete sequentially, allowing the resulting tailored shape to grow at the same pace with the concrete 3D printed shape,” the team explained.

The team used both structural and fabrication reinforcement in their research: the former will improve the structural strength of the concrete structure, while the latter will act partially as a formwork for support purposes and help achieve a greater overhang angle. A particle-based simulation tool was used to figure out how the concrete would behave.

In the paper, the researchers outlined their overall workflow process, which is broken down into three parts – design, particle and structural simulation, and fabrication. For material testing, they used a “ready-mix low pressure spray repair mortar with compression strength of 42.7 MPa and tensile strength of 3.3 MPa.” The first stage of testing required mixing the material with different water ratios to find the best consistency for extrusion; a 15.6 % ratio was determined to have the least amount of slumping. Then they tested the mixture during 3D printing, and looked into the best time to add the reinforcement:

“Regarding reinforcement insertion, we deduced that it should happen within the mixture’s set time of 60 minutes, which we confirmed with an experiment. If performed outside of set time, the insertion disturbed
the extrusion’s structure, resulting in cracking and breaking. “

They also investigated how they could get a more extreme overhang by reinforcing extruded angles. Their fabrication system was a user input that works with an ABB robot, and they were also able to interface directly between both Grasshopper and Rhino and the fabrication process itself. Opening and Branch. Tested for angles, FEA, and particle simulation

The team also outlined a design library for shapes that could be easily fabricated with their system, and used a high fidelity scanner to verify the accuracy of the 3D printed concrete models. Finally, they created the final demonstrator model: an architectural enclosure which was considered a non load-bearing structure. The researchers were able to finish their research at the Autodesk Buildspace in Boston.

“In production of this demonstrator there were great achievements and shortcomings during the process,” they stated.

“Some of the challenges were the printing system. There were times of over extrusion, because of unstable pressure during the deposition, which caused issues along the printing.

“What we were successful in was the creation of tailoring reinforcement in concrete 3D printing. It was exciting to begin to see the concept start to achieve angles greater than what can currently be produced with traditional concrete printing methods.” They hope that by adding additional technologies, they can improve upon this research even further.

“There is rich territory for this method to contribute to the current state of concrete printing. And 3D printing in general,” the researchers concluded. “The technology is becoming less of a prototyping process and more of a self-sufficient realizing technique.”

[Images by University of Stuttgart research team, unless otherwise noted]