AREVO is a Khosla backed, well funded, startup that uses a six-axis robot arm to extrude composites for manufacturing. The company has since inception spoken of breakthrough materials and applications such as carbon nanotube reinforced composites with a specific focus on printing bike frames. Now the firm has partnered with Franco Bicycles to make frames for their Emery brand. The Emery One eBike will have a unibody frame 3D printed out of continuous carbon fiber. Continuous carbon has higher strength than the more easily available short carbon fiber and indeed few firms such as Markforged, the US Army, Impossible Objects, moi, and Continuous Carbon are experimenting with this interesting technology. CFRP polymer parts have a high strength to weight ratio and of all the Continuous Fiber Reinforced Polymer materials Carbon Fiber is king. Used in anything from sunglasses to F1 and now passenger cars carbon fiber is a cool and exciting material. The material is already extensively used in bike frames extensively but with lots of manual labor required optimizing carbon fiber processing could make it more commonplace. In addition to cars and bicycles, fiber reinforced parts have an important role in aerospace and other high tech manufacturing and the material is ever expanding. 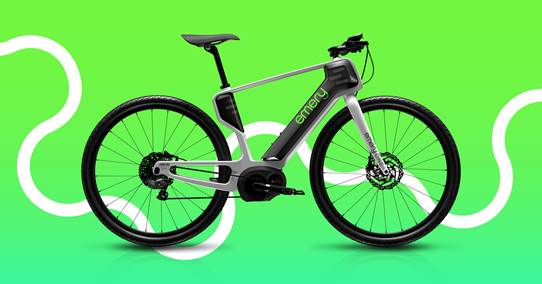 This is exactly what AREVO wants to do. The company offers a generative design platform and says it can do, “virtually void-free construction…optimized for anisotropic composite materials.” The firm says that the time to part from the idea to a final bike frame is significantly faster than with traditional hand layup composites and says that its frame consists of only one part not “many parts glued together.” Traditionally manufactured the frame would have consisted of 27 parts. This part reduction would also reduce stock and assembly costs significantly. They also tout their lower overal product development costs.

“We chose AREVO technology because its iterative and flexible design represents the new age in composites manufacturing, and we wanted to be the first bike company to help lead this revolution, AREVO’s continuous carbon fiber technology has been instrumental in achieving the ride quality and high-performance requirements we set out to accomplish with the Emery One.”

“This is the first Composite Additive-Manufactured bike frame and it represents an important milestone for the AM industry as AREVO is delivering on the promise of on-demand manufacturing of composite parts in volume now,.” “With the introduction of the Emery One, the transformation of the global composite bike industry has begun.”

The say that the main advantages of their technology as:

True serial, volume production of AM-made composite parts that are made with thermoplastic materials, which are tougher, durable and recyclable, as compared to brittle and non-recyclable thermoset materials

A replacement of a laborious manual process with a fully-automated, “lights out” production model

Delivering on the promise of localized manufacturing or “on-shoring,” which creates greater independence for bike brands

A much greater “freedom of design” for bike manufacturers that creates the possibility of fully-customized bikes made on an “on demand” basis, an approach AREVO calls “DESIGN. PRINT. GO.” Brittle composites using thermosets are a big issue in bike frames. A several thousand dollar bike frame which is in and of itself very strong could shatter if it hit a curb. If the firm could equal the strength of traditional thermosets for thermoplastics the environmental benefits would be huge. Not only would parts last longer but their recycling would be more possible also. Current carbon fiber materials are impossible to recycle and pose a huge environmental burden. The materials used are also quite dangerous for man and planet and it would be good to see in what way AREVO could improve on this. True lights out production would radically cut costs as may local manufacturing while increased geometric freedom and on-demand production may radically alter the economics of bike making. This kind of technology could be a big threat for the mainly Taiwan based manufacturers of Carbon fiber bike frames. Unless of course, they develop a similar technology of their own. Carbon fiber bike frame manufacturing moved to Taiwan because under stricter environment and employee safety regulations in Europe the industry was pushed out. With good reason as well, the fibers, resins, processing chemicals could encompass many negative health effects for workers and their surroundings. To me, AREVO’s technology is possibly a hugely exciting one if they can prove that they can produce sustainable composites that can in some way be recycled. Industries such as automotive and aerospace are thinking of the end of life consequences of their parts while also trying to lose weight. If AREVO can demonstrate high strength to weight, less part brittleness, low environmental impact during production, long life and post use recycling then they could have a blockbuster technology on their hands.

You can see the Emery at booth S9 at the Sea Otter Classic bicycling event in Monterey, California, April 11 – 14.