The Jurong Bird Park in Jurong, Singapore is home to several hornbills, including a Great Pied Hornbill named Jary. His name means “helmeted warrior” in ancient Norse, and it’s a fitting name for the 22-year-old bird, who recently battled and beat cancer. Things didn’t look so good for Jary at first, when keepers noticed a large crack on his casque, or the helmetlike structure on the top of his bill. He underwent a CT-guided biopsy and the veterinarian confirmed that the crack was caused by cancer. Two other hornbills at the bird park had recently suffered from cancer; the first was treated with chemotherapy but didn’t make it, and the other had a case that was too far advanced for treatment. The veterinary team didn’t want the same fate for Jary, so they decided to try something different. 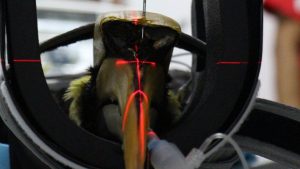 It took almost two months of planning, but the team of veterinarians worked with Keio-NUS CUTE (Connective Ubiquitous Technology for Embodiments) Centre, NUS Smart Systems Institute, and NUS Centre for Additive Manufacturing to design a 3D printed prosthetic casque for Jary. The 3D models were assessed by honorary consultant Dr. Hsu Li Chieh from The Animal Clinic. The cancerous part of Jary’s casque was surgically removed, and then Dr. Hsu used a drill guide to attach the 3D printed casque to the bird’s bill, covering the exposed tissue. Dental resin was applied to the new casque to seal any gaps.

Jary will have his 3D printed casque until he can regrow a new one naturally, but he seems to like it so far – he even colored it himself, rubbing it on his tail which turned it yellow. He’s a very color-coordinated bird now; the 3D printed yellow casque is only a few shades lighter than his original casque. “Jary was eating normally the day after the surgery, and recently also started rubbing the prosthetic casque on its preening glands, which secretes yellow pigment,” said Dr. Xie Shangzhe, Assistant Director, Conservation, Research and Veterinary Services, Wildlife Reserves Singapore. “These natural behaviours are good indications that he has accepted the prosthesis as part of him.”

Great Pied Hornbills can live up to 40 years on average, so Jary may still have a long and healthy life ahead of him. The species is classified as Near Threatened on IUCN’s Red List of Threatened Species, so the early death of any bird is a tragedy. It may have been too late for the other two hornbills affected by cancer at the Jurong Bird Park, but Jary’s story has a happy ending. He is far from the first bird to benefit from 3D printing; he joins another hornbill, a toucan, a bald eagle, a crane, a cockatoo, a macaw, a pelican and others who have received new beaks after their natural ones were damaged from injury or illness, and plenty of others have received 3D printed legs or feet.

3D printing has made a huge difference to all sorts of animals, who often would have needed to be euthanized or would have otherwise passed away from disease, infection or injury. From cats to turtles, both pets and wild animals have been given second chances at life thanks to 3D printing.