The specter of counterfeit products is always a concern for any company that relies on other facilities to actually manufacture and assemble their products. From fake Rolex watches to fake iPhones to fake Louis Vuitton purses, large companies often spend millions to protect their intellectual property from criminals who copy and sell fake products to often unsuspecting consumers. While it can be easy to be anti-corporate and turn a blind eye to this kind of theft, especially when the companies are large and extremely profitable, their concern goes far beyond the potential loss of profits. The fact is, most counterfeit products are vastly inferior to the real thing, and if a consumer doesn’t know that they are purchasing a fake then the company not only has a lost sale, but their reputation will take a hit based on something that they didn’t even produce.

Even as 3D printing continues to grow into a valid and profitable alternative manufacturing method to injection molding or large-scale mass production, there are still companies that see the threat of counterfeiting as a reason to stall the adoption of 3D printing technology. Realistically there is not much that can be done about pirated 3D models and individuals using home 3D printers to make fake products. Combating individual piracy has been woefully ineffective for the entertainment industry, and probably only encouraged more users to download electronic files illegally. It stands to reason that going after individual pirates will work just as well if the 3D printing industry makes an attempt to over-regulate and control the flow of 3D printable files. 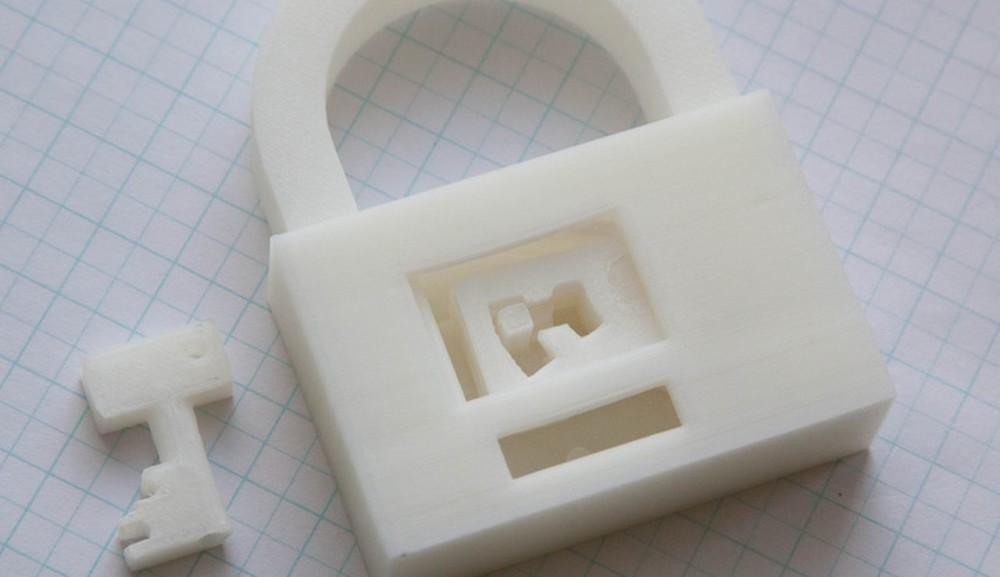 DRM on 3D printable files is probably not going to be an effective deterrent.

Many of the solutions that are being floated as counter-counterfeiting measures don’t really seem especially feasible or sustainable. Adding DRM (digital rights management) or unlock code requirements to 3D files may slow down some users, but just as with DRM efforts on movies and video games, if someone can put a lock on something, someone can take that same lock off and teach others how to do it as well. These efforts may work in the short term, as the pool of users who are capable of breaking DRM on 3D printable files is smaller, and there isn’t really an outlet to disperse those illegal files yet. But as the industry grows it is going to be harder and harder for companies to control their intellectual property using these methods. I’m not really sure that there is much to be done on this end of the industry. Besides, there is an even greater counterfeiting problem brewing on the manufacturing side of the industry and it is far more important than individual piracy ever could be. As with fake mass-produced consumer goods, mass-produced industrial parts are also counterfeited quite frequently. It may be more interesting to talk about fake purses, but a greater threat is products like fake screws, bolts, fittings and individual components. Many of the parts that are used to build our homes, businesses, vehicles and personal electronics use mass-produced components that manufacturers simply purchase in extremely large quantities. And all of those parts are held to very strict manufacturing guidelines that dictate how they can be used, what their maximum stress tolerances are and how they can be expected to perform.

When these types of components are forged, they are rarely made with the same quality of materials and often don’t even come close to performing as required. If these fake parts find their way unknowingly into the hands of manufacturers, who design products with these components’ manufacturing guidelines in mind, then the results could be catastrophic. There have been instances of airplanes and automobiles that have crashed due to the failure of lower quality, counterfeit parts. Buildings and homes are also at risk due to poor quality and counterfeited construction materials being used. It may seem odd, but cheaply made products that do not pass strict regulations are a huge business and lives can be lost to it. With 3D printed components becoming more common, and eventually expected to be extremely common, counterfeit parts will pose a real risk. Using DRM, even if it was effective on a small scale, to prevent machines from making unauthorized parts is not going to matter when these parts can simply be 3D scanned and reproduced without the need for the original 3D model. The methods that need to be developed to combat this type of industrial counterfeiting will need to work in ways that DRM never will and identify the specific physical object as authentic. There are a few different methods that are currently being proposed, with varying probabilities of success.

The most likely option will be including RFID tags on 3D printed components that will identify an object as the real thing. The idea is that any part that doesn’t have an embedded RFID device in it — and they can easily be made small enough to easily be inserted inside of a 3D printed part — will automatically be identified as fake. The downside of this method is price, as the RFID tags themselves would be costly, as would the labor involved in inserting them. Testing for tags will also require specialized equipment that adds more cost to the authentication process. It is possible that a 3D printable material that would act as a tag called InfraStructs could be developed, but that would mean developing multiple materials that will be RFID reactive, which will be quite costly on the development side.

Another authentication option would be chemically tagging materials that can be detected with a handheld spectrometer. There are multiple companies providing these types of materials, but the most promising is a technique developed by InfraTrac. The Maryland-based company has developed a chemical that can be discreetly added to virtually anything without altering the chemical makeup of the material. For instance, parts can be 3D printed with a small subsurface “fingerprint” hidden in a discrete location. That mark alone would be printed with the material that has been treated with the chemical, and would easily identify the part as genuine. The material could also be printed as a single layer of the print with no mark, and no risk of altering the integrity of the part. Of course again this comes with it the need for specialized equipment in the form of the spectrometer and an actual machine that can 3D print with the standard material and the second, tagged material.

One thing is very clear, there is a desire for additive manufacturing to be developed as an alternative to other mass production methods. That means the companies looking to use 3D printing to manufacture parts, and the 3D printing industry itself, are going to need to address the problem sooner rather than later. Determining which of these options is the ideal solution will not be an easy choice, as they both bring with them additional costs and challenges, but doing nothing simply isn’t an option. Discuss your thoughts on this topic in the Counterfeited 3D Printed Parts forum over at 3DPB.com.