Lately it seems that you can’t go a day without seeing or reading about new 3D printed RC drones, quadcopters or upgraded parts coming out. If ever there was a hobby suited for 3D printing it is probably customizing drones. With a 3D printer, a drone pilot can very easily create customized shells, accessories and even upgraded parts, giving them the coolest drone in the skies. And while drones and quads aren’t especially cheap, there are several companies that are starting to bring lower cost options to market.

The Micro Drone from the UK’s Extreme Fliers is a tiny RC drone that is small enough to fit in the palm of your hand, powerful enough to hold a small camera and only costs about $100. The tiny drone has pre-programmed tricks and movements, so it is quite easy to control and has surprisingly long battery life. And while it doesn’t have a lot of range, it is the perfect size for flying in a park or a backyard. It also has an easily removeable outer shell, making it ideal for customisation and modding. While talking to Vernon Kerswell the CEO of Extreme Flyers at 3D Printshow Berlin in April, artist and designer Kai Bracher got the idea to design a 3D printable case for the drone. The artist is already a designer of high quality metal 3D printed dragon themed door pulls and knobs, so a dragon themed case was his first idea, however Kerswell suggested a wasp. Bracher went ahead and decided to design both. “I actually did design a first draft of a dragon case on which the complete “sub-construction” (struts, battery case, motor holders..) was substituted by a 3D printed dragon. Obviously this was technically more demanding than a simple “clip-on”-solution. So a lot of the time was spent on technical and static issues rather than actually designing,” explained Bracher. Finding his first outing to be too complicated, Bracher turned his attention to the wasp idea. The wasp case was designed in ZBrush after he sketched out a rough design on paper using photo references from the internet. Determined to simplify the case, Bracher came up with a final product that only required removal of the original case in order to snap the new one in place, making it an extremely easy modification to make to the Micro Drone.

“I decided to choose a different approach for the follow up cases (The wasp and a second dragon) Instead of substitute the pretty sturdy metal struts I used them to attach my case to it.  This allows me to design faster, comes cheaper and saves the user from having to completely disassemble and reassemble the drone,” Bracher continued.

Unfortunately Bracher is not selling the STL files for his wasp or dragon case but rather selling the finished product on Shapeways. The case only costs $29.95 and is sent as a single color, so the black parts would have to be painted in before being attached to the drone. The wasp legs are printed as a single part, so they just need to be cut apart and snapped onto the body of the drone. You can find out more about Bracher’s designs on his website, and see all of his great designs on his Shapeways store. 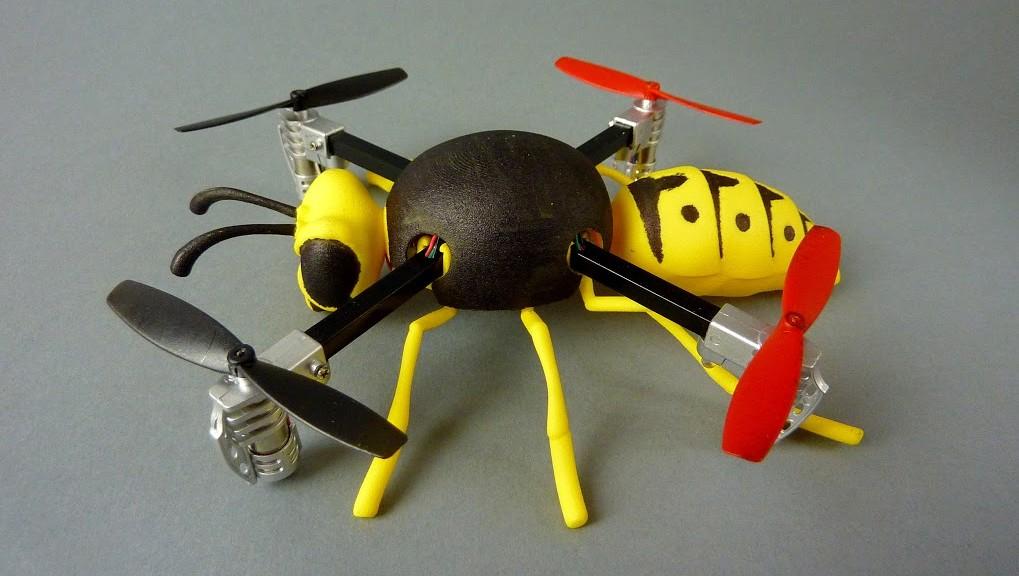 Bracher is still working out the kinks in his next snap on dragon case design and expects that it should be available soon, however he does not have any pricing settled yet. Have you created your own 3D printable case for a drone or quadcopter? Tell us about it in the Micro Drone 3D Printed Buzzing Wasp forum at 3DPB.com.

Here is some video of Bracher explaining how to put his wasp case onto the body of the Micro Drone: