Once the most powerful and feared navy internationally, and of great historical significance, the UK’s Royal Navy is also the oldest element of naval military and force worldwide. As part of ‘Her Majesty’s Naval Service,’ its origins go back as far as the 16th century. And while they may be one of the oldest militaries and have scaled down significantly in past decades, the Royal Navy remains a highly sophisticated military division to be reckoned with.

Featuring advanced technology that allows them to make a difference, still, on a daily basis, the individuals of the Royal Navy take on the challenges not only of traveling the world and braving the unpredictable seas of Mother Nature, but also of finding, examining, and countering the threat of existing naval mines.

In a celebration of the Royal Navy, technology enters the picture again, but this time in the form of 3D printing, as Ogle Models and Prototypes triumphantly laud their efforts with replicas of the remote controlled boats currently used by the Royal Navy. With over 60 years of experience as a manufacturer in the UK, Ogle is known for their excellence in designing and producing models and prototypes, which is why they were trusted with the project to duplicate the watercraft.

Ogle, in an effort focusing on showing off the technology developed by Atlas Elektronik, had the task of highlighting a new system which is of great significance: with remote control they are able to put boats in an area while eliminating the risk to human life due to underseas mines.

The technology is called Atlas Remote Capability Integrated Mission Suite (ARCIMS) and is used to detect and counter underwater naval mines, as well as detonating and destroying them — making the waters safer each time, while keeping members of the Royal Navy out of harm’s way as well. Atlas is no stranger to developing technology for their military. It is, quite simply, expected of them as leaders in providing technological solutions to multiple areas performing defense operations. 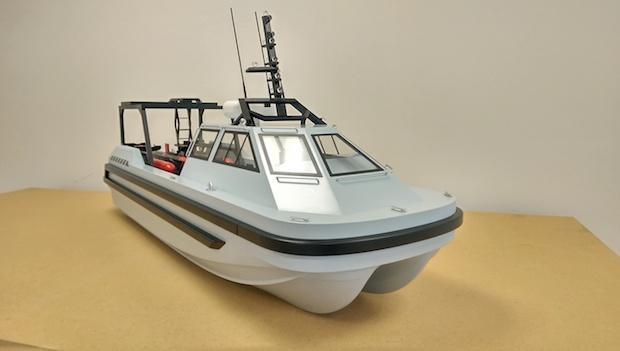 Atlas enlisted Ogle Models and Prototypes to design replicas so that they could use them in exhibitions and in demonstrations for potential clients.

“We started by using the CAD drawings for the full-sized boat and resizing the drawings to create accurate and detailed plans for the two models,” said marketing and sales manager Dave Bennion.

The task and challenge at hand was to produce two precise models, one sized at a scale of 40cm long and the other 1m long, and the team was indeed able to successfully 3D print their impressive smaller boats from the original files.

“The same processes were used to create both models. The hulls were CNC machined from model board. The cabin sections were created from SLA printed parts,” added Bennion. “Machined acrylic glazing panels complete with frames made up the windows which were then bonded into place. The main mast, engines and interior details were again formed using SLA.” The technology of 3D printing and the technology of Atlas came together in tangible form so that the company can show off their new product, and those who are interested in purchasing it are able to enjoy studying it in great visual detail.

Have you used 3D printing to create any replicas of boats or ships? Have you 3D printed any parts for your own boat, or do you have plans to do so? Share your thoughts in the Royal Navy 3D Printed Boat Replicas forum over at 3DPB.com.