24-year-old Andrii Gidzun and 18-year-old Vitalii Ivashchuk are just some of the young casualties of the hostilities taking place in Ukraine, with both becoming amputees during the conflict. Ivashchuk said his injury was the result of tank shells, which led to the amputation of his hand above the wrist. However, thanks to U.K. firm Open Bionics, the two have been outfitted with 3D printed prosthetics.

Members of the firm flew to Germany where, in Munich, they provided training to three Ukrainian prosthetists. Open Bionics CEO Joel Gibbard was on hand to oversee the process. The trip and arms were paid for by the Superhumans Center, a charity aiming to establish a hospital in Lviv. I’m uncomfortable with providing the name of the hospital, but its goal will be to deliver advanced prosthetics to Ukrainian soldiers and civilians affected by Russia´s attack on Ukraine, which is laudable.

Upon receiving the limb, Ivashchuk said, “I cannot describe it. I am pleased that I have such an opportunity to get such a functional prosthesis. I did not even hope for it. When the electrodes were applied and I had the opportunity to test this prosthesis, I just enjoyed it.” He wants to return to the front to fight again. 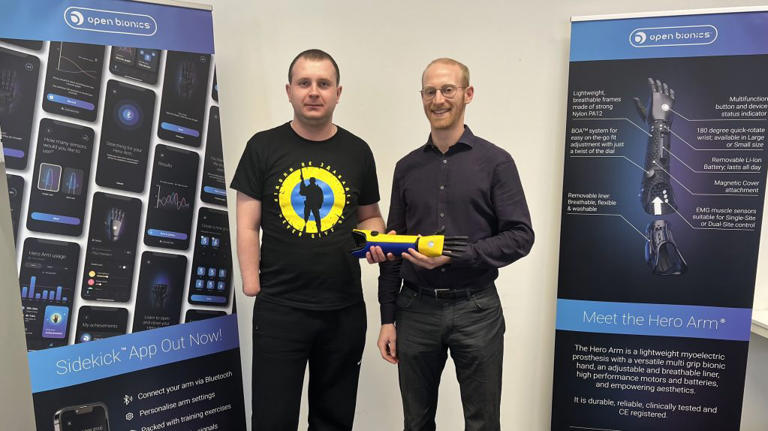 I’m amazed at the functionality of the Open Bionics arm, which is a very advanced arm and provides wearers with a wide range of motion and control. However. the arm does cost between $11,000 and $20,000, with an up-front arm payment of $11,000 and the possibility of a subscription. Arms like these usually last up to five years. Now I love what the company and charity are doing in this case. Making this kind of 3D printed technology available should be applauded. However, I’m wondering if this is the most cost-effective approach. The Ukrainian team about to set off for Munich

Typically speaking, super extremity prostheses range from $2,000 to $100,000 in a market such as the United States. Simple hook type arms are on the lower end of the scale. Bionic arms are around $10,000 to $30,000. A more complex myoelectric prosthesis that also includes the shoulder may be well above $100,000. There are a wide variety of prosthesis, from body powered to electric and passive. There are also a number of injuries that will require different levels of care, as well.

In the Prosthetics and Orthotics Podcast, we’ve talked to over a dozen different clinicians on when to use which prosthetic. And it really does differ depending on the lifestyle, what the person needs, and what they do day to day. Furthermore, less than half of upper arm amputees rely on these devices at all. So, depending on the patient, it may be needed but different options could make sense.

There are plenty of people that use a hook-like or split hook prosthetic day to day and are perfectly happy with this. Such a device would be far less expensive than a bionic one. In a case like these soldiers, wouldn’t it be far better to help five people with a hook, rather than one with a bionic hand? It would also be far more useful to let the work be done in Ukraine itself. It is nice that they’re training local prosthetists but what if the company was Ukrainian or the people were manufacturing in Ukraine?

I’m obviously coming from a place of privilege, as someone without a disability, and don’t mean to disparage something as wonderful as an organization that is helping others with 3D printed hands. But, at the same time I also want to see the most effective outcome possible.