We often see metal 3D printing used to make steel parts, so plenty of research is being done regarding the material properties. Researchers from VSB – Technical University of Ostrava in the Czech Republic published a paper, “Research of 316L Metallic Powder for Use in SLM 3D Printing,” about investigating Renishaw’s AISI 316L powder for use in Selective Laser Melting (SLM) technology.

“Understanding the SLM process is extremely challenging, not only because of the large number of thermal, mechanical and chemical phenomena that take place here, but also in terms of metallurgy. The presence of three states (solid, liquid, gaseous) complicates the ability to analyze and formulate a model formula for proper simulation and prediction of part performance when printed,” they explained. “Since the SLM process operates on a powder basis, this process is more complicated by another factor compared to the use of other bulk material. The properties of the used printing powder define to a large extent the quality of the finished part.”

Because the material can impact an SLM 3D printed part’s final properties, powder research should be done ahead of time for best results. Particle size, shape, flowability, morphology, and size distribution are key factors in making a homogeneous powder layer, and using gas atomization to produce spherical particles helps achieve high packing density; this can also be improved with small particles.

The researchers investigated three phases of metallic powder present in the SLM process – virgin powder (manufacturer-supplied), test powder that had been sieved 30 times, and waste powder “that had settled in the sieve and was no longer being processed and disposed of.” They used a non-magnetic austenitic stainless steel, alloyed with elements like nickel and chromium and containing a low percentage of carbon.

Scanning electron microscopy (SEM) was used to investigate the powder morphology, which “affects the application of metal powder by laser in terms of fluidity and packing density.” First, the shape of the powder particles was measured and evaluated, and then a visual quality evaluation was completed to look at the spherical quality and satellite (shape irregularity) content. The team found that many particles had satellites, but that this number increased in over-sized powder. “The measurement of virgin powder (Fig. 1) reveals that the production of powder by gas atomization is not perfect and the shape of some particles is not perfectly spherical,” the researchers wrote. “It is also possible to observe satellites (small particles glued to larger ones, Fig. 2), which are again a defect of the production method.” They found that the particle shape was “not always isometric,” and that cylindrical, elongated, and irregular shapes appeared alongside spherical particles in over-sized powders.

“Another interesting phenomenon was manifested in the sieved powder, where particles with a smoother and more spherical surface were observed than the original particles. This is most likely due to the melting and solidification process that is specific to AM,” they noted. An optical method was used to measure powder porosity. The 316L powder was embedded in a resin, and was “1 mm layer abraded” post-curing before the particles were cut in half and polished with diamond paste. The images captured via microscope were loaded into analysis software, which determined that the total density of the powder was 99.785%.

“In general, pores must be closed from 3/4 of their circumference to be considered pores,” the team explained. “Particles that do not comply with this rule are automatically considered irregular particles.”

Fig. 4. An example of open pores that correspond to the rule (L), and pores that do not conform (R)

The researchers also measured the size of all individual pores and recorded which ones began at 5 µm, though they noted that due to potential image resolution issues, “pore sizes of about 5-8 μm should be taken with some uncertainty.”

A histogram showed that, in the metallic powder particles, the “15 µm pore size was most present,” and that the largest was 30 µm. Finally, they used an optical method to measure and examine grain size distribution of the virgin and sifted powder. Using 200x magnification, measurements were taken at five random locations, each of which had roughly 200 particles on which they performed static analysis. The results were processed with statistical software, which created cumulative curves to indicate how many particles were smaller or larger than a certain size. 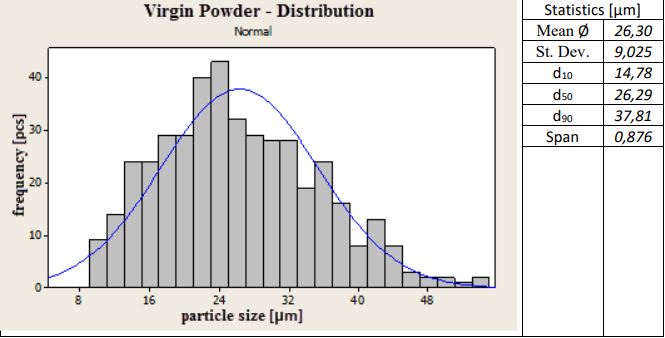 The average particle size only increases a little by repeatedly sieving the metallic powder, but because of irregular particles, agglomerated or molten particles larger than 45 μm, they fall through the mesh. Results show that <10 µm particles are reduced, while larger particles are increased, in the sift powder. But, the team notes that the powder is still usable. “The sift powder showed an increase in particle volume and surface area while circularity decreased, indicating that virgin powder generally has a higher sphericity,” the team explained.

They found defects like agglomeration, gas impurities, and particulate fusions at all three stages, but since the powder is still usable, they concluded that SLM is both an economic and ecological technology. The researchers listed several measures to take in order to “achieve the best possible consolidation,” such as high purity, fine surface, low internal porosity, tight particle distribution, and as few surface pores and satellites as possible.