On Friday, CES 2017 was again in full swing following a very busy day one — many exhibitors braced themselves for what they had heard would be the busiest day of this massive consumer electronics trade show, and the crowds certainly seemed to give proof to that thought. Once everyone had steeled themselves (and filled up on coffee), it was back into the madness as the second full day took off. As the only dedicated 3D printing news source here in Vegas, the schedule for 3DPrint.com was very full with interviews and insights to see all the latest on the floor at the Sands Expo; stay tuned for more details to come from all the great conversations as we continue reporting right from Las Vegas! My first stop yesterday was at the Shining 3D booth. The China-based company has introduced a new 3D printer and a new 3D scanner at CES, and had both to display. Talking with Oscar Meza, Vice President of Global Sales, and Icy Xie, Marketing Director, at their booth provided insights into the company’s plans to provide a full ecosystem in which users can go from a point cloud to a model, then 3D print that model. Meza and Xie told me about Shining 3D’s plans for global expansion, further introductions, their experience at CES, and their focus on educational and other markets — be sure to check out the full interview coming soon! In the Israeli pavilion in Eureka Park, Israel-based Nano Dimension was showing off one of two DragonFly 2020 3D printers they’d brought to CES. The other, shown with their partner FATHOM, was running with CBO Simon Fried; I spoke with Galit Beck, Marketing & Public Relations Manager, and Robert Even, Materials Manager, while visiting again with one of my favorite 3D printers coming to market and looking at the portfolio of materials. I first saw the DragonFly at formnext in November, and we’ve been following its path to market as it comes ever closer to fully delivering on 3D printing of electronics on a variety of substrates and with incredible potential. Among the substrates I saw printed circuits created on were: PET, PEN, glass, consumer goods labels, cans, FedEx cartons, textile/nonwoven bags, paper, Mylar, stainless steel, FR-4, silicon wafer, textiles for wearables, brass, aluminum, and polyimide (Kapton). 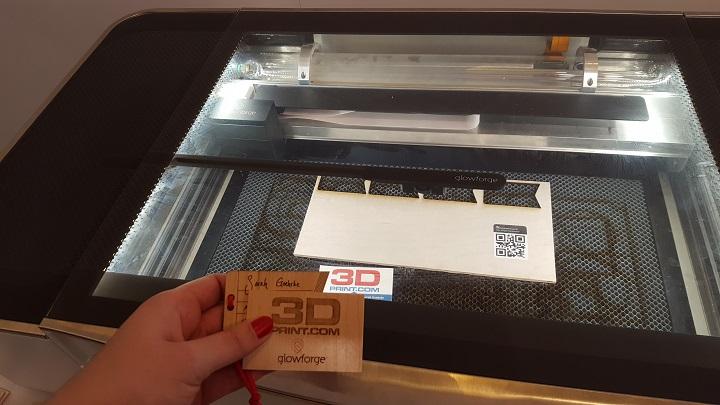 It’s real! The much-storied Glowforge, a 3D laser printer that hit crowdfunding like a hurricane, took in $22 million in investment, and drew a lot of attention first for its incredible promise and later for its lack of updates or delivery, has seemed a tough case. Delaying a product’s release until it’s ready to go is ultimately often the right move for a company, but that doesn’t make it easier on those who had been looking forward to getting their hands on highly anticipated pieces of technology. I met with Dan Shapiro, CEO, and Bailey Nelson, Marketing & Communications Manager, at the private suite of FLEX, which is making the Glowforge machines, and was treated to a couple of demonstrations. Nelson also told me that Glowforge is hard at work on a removable toolhead that will add functionality to the Glowforge — including the potential to 3D print from the machine! For the demos, first I wrote out my own luggage tag information and had a customized tag, in my own handwriting, created in less than four minutes; next, Nelson made me a little tag with both the Glowforge and 3DPrint.com logos on it — check out the real time process of that creation below (Shapiro had to head to the airport at this point to catch his flight, amidst the additional security measures put into place from the morning’s tragic events in Florida): At the large WhiteClouds booth toward the front of the 3D printing marketplace, CRO Braden Ellis took the time to tell me about the company’s latest happenings, enthusing as well about the company’s reception at CES as they seek to educate visitors about how much can be done with 3D printing — much more than “tchotchkes from FDM” (though there’s always room for novelty, as some of the company’s many pursuits illustrate). From architecture to drone imaging to medical, WhiteClouds is looking to be “the Amazon of 3D printing.” The company has seen some solid growth lately, and is looking to expand its presence in foreign markets — and Ellis noted that they will be making two big announcements in the next few weeks. Easily one of the most exciting announcements at CES so far has been a strong one from a strong company as Markforged announced their entry into metal 3D printing with the new Metal X 3D printer. I spoke with CEO Greg Mark about the new machine, and his enthusiasm is certainly contagious. The closed-cell honeycomb construction possible with their new Atomic Diffusion Additive Manufacturing, or ADAM, technology allows for strong, quickly printed components. Mark noted that this is the only metal system that can do honeycomb throughout in this enclosed structure. Understanding as well that there’s no one-size-fits-all solution for users, with the example of a Ducati bike that is itself made with plastic, metal, and carbon fiber parts, Markforged is offering the new Mark X in a cost-saving bundle with their Mark X — and he showed me parts made for the Ducati from their printers, with one carbon fiber and one metal clutch part. One of the busiest companies at CES, both in announcements and in visitor volume, is clearly Colorado-based Aleph Objects with their LulzBot 3D printers. With new hardware, software, partnerships, and executive team announcements, it’s a good thing the young company is now up to 150 employees — they certainly need all hands on deck to keep up with everything they’re up to lately. I spoke with Kara Sawinska, Marketing Associate, at length, and also caught up with new company president Harris Kenny at the booth, checking out the new MOARstruder in person as several LulzBot 3D printers around the booth whirred away. Both Sawinska and Kenny underscored the company’s dedication to real growth, and what sets this team apart is their genuine want to provide the best quality possible at every turn. The company’s open source philosophy lies behind every move they make, as they keep their community in mind. Talking with Joey Cheng, Overseas Business Manager with Shenzhen ESun Display Co., Ltd. (ESUN 3D+), brought some of the fun back to the show, as visitors to this large booth are greeted by large screens filled with dancing avatars. Using 3D scanners to capture faces in full detail, the company allows for people to scan their faces and use their own likenesses as avatars. ESUN 3D+ offers a Face Scanner, as well as a Clothes Scanner featuring two projectors and two DLSR cameras to capture a 360° of clothing for use in online shopping, and a series of three Desktop Scanners (standard, education, and deluxe solutions) said to have about a 93% accuracy rate. At the Titan Robotics booth, the new five-head Cronus 3D printer is impossible to ignore. Officially introduced at CES, the Cronus is built using Project Escher technology from Autodesk, and uses Netfabb software. The company notes that the Cronus combines Autodesk Netfabb’s collaborative multi-head 3D printing technology to create a groundbreaking new solution for higher-speed, higher-detail, industrial-scale parts made via additive manufacturing technology. The large-format Cronus was in action on the exhibit floor, and between the eye-catching size, LEDs, speed, and five-axis movement, it was definitely worth the visit to learn more from the Colorado-based team, including Maddie Garrett, Customer Relations.

I couldn’t resist snagging shots with some of the hardware I saw yesterday at CES — here’s a quick gallery of hardware I’ve loved, with me (standing about 6’1″) for scale to show the printers’ footprints.