Most of us count down the days to our vacations. While some are off the cuff, many are also well-planned and well-saved for, sending us off to beautiful new destinations to recoup, rejoice, regenerate, and return anew. Sandy beaches and pale blue water are of course always enticing. But if you want true serenity, take it underwater. No phones ring there; no emails or texts ding in to interrupt your thoughts. There’s little communication, aside from a tap on the shoulder from a buddy pointing at a lovely reef fish. It’s the total escape.

Many of us start off swimming at the beach—at young ages if lucky—taking to the water like eager tadpoles. That quickly evolves into snorkeling. And the grown-up version of this, for the more adventurous, is SCUBA diving. It’s definitely a vacation sport, but one that takes a lot more preparation than buying a kit at Walmart and diving in. Schooling and certification are involved, along with what’s generally considered to be some pricey gear for the eponymous self-contained underwater breathing apparatus. You may use equipment from your dive school at first, but if the passion for SCUBA is building, you’ll probably be saving up to go all-in before you know it.

One diver is so enthusiastic about the sport that he’s actually gone to the 3D printer and made his own second stage, low pressure regulator. Considering we’ve all seen the movies (and the news too!) where things have gone wrong during a dive, here we are assuming that this creative SCUBA-loving maker would have to have extreme confidence in his engineering, from the workshop to the deep, before he ever actually used this. This OpenSCAD 3D printable design is (alert!) still in testing, but it does sound as if it might possibly have the potential to proven viable one day. For the novelty, this regulator is definitely worth checking out—and especially if SCUBA is one of your interests. But before you start envisioning yourself in the water swimming in sync with the rays and the angelfish, keep in mind that the designer, Dave—also known as biketool—in no way condones using this or promises safety of any sort. Obviously, when it comes to breathing, no one wants to be responsible for someone else using their equipment hack. And there’s also the issue of what material you or biketool are printing with, and whether or not you are going to be dealing with toxicity issues from filament—a subject we usually cover in regards to the 3D printing process—not breathing with one of the constructed models. So, while this is a fun idea, let’s just consider it window shopping on Thingiverse for now.  Enjoy it sort of in the same vein as that retro SCUBA helmet that we became enamored with last year.

“I only give permissive license to take these files for academic study on how a second stage demand regulator works, I do not give permission to print or use as SCUBA systems or any use for humans or animals,” explains biketool on Thingiverse. “Our lungs are surprisingly fragile and drowning, air embolism, or lung injury are actually pretty easy when dealing with compressed air and depth, especially to untrained divers so don’t use this it is a science demo not a real regulator for human use.”

His first test, ‘for personal demonstration use’ was with a 120PSI filled 2l carbonated soft drink bottle (or you could us a long hose) and a home workshop air tank/compressor.

“Regulator valve lever is included with the inner mechanism file until v3. Just print this and acquire a blown bicycle tire of sufficient diameter to scavenge the valve and rubber and some wood screws,” he explains. 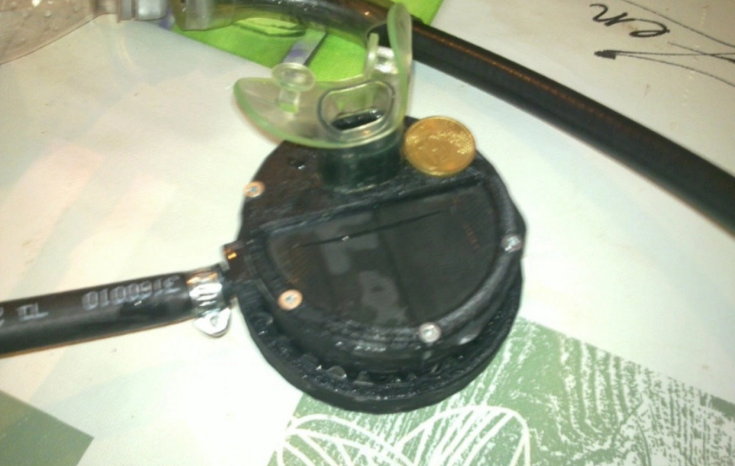 Once you’ve located the blown bike tire, a kid’s snorkel is next on the list for making a mouthpiece, modified to length and attached with a zip tie. From there, he recommends trimming the Schrader valve pin pusher as well as sealing so that the regulator does not flood during testing.

“Needs a round rubber diaphram to press the demand lever (bicycle inner-tube rubber) and a bicycle tire Shrader valve to actually do the precision work of the demand valve, a pin for the regulator valve lever, a scuba mouthpiece (or hack one off of a supermarket snorkel), as well as a bit more rubber innertube scrap for a flapper valve for the exhale port,” explains biketool.

“Just to be clear the only precision part in this regulator is a factory made Schrader valve, everything else is just there to press that pin to release breathing air or to valve out any exhaust air and water in the regulator at exhale.”

This sort of design is meant for an extremely niche group. You will need to be a pretty experienced hacker as well as possessing some thorough knowledge of SCUBA diving for motivation to put this together in the first place. It does sounds like quite a challenge if this is what you are into, and according to the comments we were able to read on Hackaday, makers had mixed ideas on the level of danger, with a few encouraging comments regarding safety, figuring this mode would be about as safe as breathing air pumped out of a bike tire, and others seeing this as feasible as long as you dove no more than five feet. As is often the case, while this design and the theory behind it are very interesting, sometimes the comments from the peanut gallery are even more entertaining.

The creator of this 3D printed SCUBA regulator explains that ultimately his hope is for an engineer to become interested and then help release the design as certified for diving.

“…until then I am the only person with permission to print for human diving purposes if that even turns out to be legal, all others are pirating my design if they dive or even breathe with it or use it in a design which is used by a human or animal. For you all this is a functional demonstrator model no more usable for real world application than the printable jet engine models found on Thingiverse.”

For further information on this concept, biketool offers some links that will help you understand the overall mechanism better, as well as explaining in depth how a regulator works, and then offering a list of edits he has made since posting the design. Discuss further in the 3D Printed Scuba Regulator forum over at 3DPB.com.