I’ve discovered over time that not everyone loves IKEA as I do. While their furniture generally looks quite amazing when showcased correctly, they’ve gotten a bad rap over time for offering up cheap prices with way too many pieces to assemble, outrageously ridiculous directions that husbands apparently require massive amounts of imported beer to cope with, and although it’s really never been my experience—flimsy results that, ahem, are not said to get better with age.

The making community however has a tendency to enjoy the products of this company that so famously hails from the woods of southern Sweden and is now known by all, whether you own their furniture, have eaten their meatballs, or napped in a display bed in one of their stores. And it’s easy to see why creative types are drawn to the new trend of hacking IKEA wares. You can take their creativity and streamlined style one step further, make it your own, and improve on it. Whether they know it or not, IKEA is supplying makers and hackers everywhere with open-source furniture, as well as the resources to take other projects one step further, as we are seeing in the case of a cool hack that 3D Hubs just shared with us, having some fun on a Friday afternoon at the office.

IKEA tables seem to be a staple for those using IKEA stuff as hacks—or as in the case of the UK’s Wayne Mason-Drust, using them as integrated supporting mechanisms. And releasing his ‘Ultimate IKEA LACK Table Hack,’ on YouTube for the purpose—or re-purpose, rather—of sharing his upcycling and recycling idea has earned him numerous excited comments. One fellow hacker commented on how he so brilliantly ‘re-engineered’ this IKEA item, putting the design right into perspective (the ‘commenter’ used a couple of other choice enthusiastic words, but you can read for yourself there). 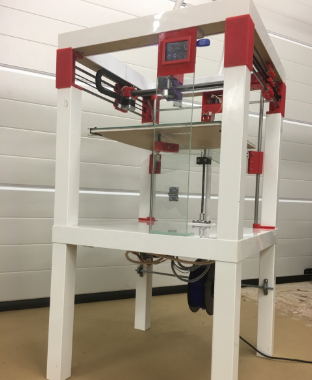 The result of Wayne’s project is a 3D printer, made with IKEA parts, that looks amazing. This is a man who was not afraid of assembly challenges, obviously, when he decided to center his new machine around LACK table parts.

Many of us have these tables, and if not from IKEA, then something very similar. They retail for under $10 and function as the perfect night-table for a dorm room or apartment. Note that yes, these tables are easy to assemble; however, Wayne definitely elevated these parts to an impressive new level of functionality and aesthetics. If you delve further into the comments he’s received from the video, you’ll see though that a major concern is that it looks good, but is it actually strong?

“I have printed a Marvin at 100mm/s with low quality 0.5mm build height in four minutes and a detailed one 0.1mm height in 40 minutes,” replied Wayne. “Quality vs speed at 50mm/s–the machine gives great results.”

According to Wayne, he used a size 0.6 nozzle with an E3D Volcano HotEnd connected to a E3D Titan Extruder, along with an MKS SBase controller and MKS TFT using Smoothieware.

“I intend to extend the extension pieces to increase the Z Height and look at other versions of the lack table range now I [that] have a fully working prototype,” says Wayne.

He says that he was able to make the printer for £260 (translating to around $377 USD), but intends to cut that further. At that price there are other printers you could probably buy as kits, but who wants to miss out on being part of the growing cultural phenomenon of the trendy IKEA hack?

Wayne sees it as a great and very affordable way to make a ‘cheap, large format printer.’ He claims his machine is sturdy and lightweight, and will soon also boast a printed heat bed as well as an enclosure.

“Thanks for all the comments. I will be publishing an Instructable shortly with the project being named PRINTTABLE, and PRINTTABLE.com is now under construction,” says Wayne, and it would seem he already has a list of fans waiting to get their hands on these files, with one maker mentioning he already has a LACK table unassembled in storage, ready to go.

[Update: the design is up on Instructables!] This isn’t the first time we’ve seen a great 3D printed IKEA hack, from rudimentary 3D printer enclosures to lighting fixtures, vases, and even a cool little bike. Wayne’s idea, however, is the first we’ve seen where the printer’s design relies on and is greatly enhanced by a table that costs only $9.99. Do you have one of these little white tables, and it did it ever occur to you in your wildest dreams that you might see it reconfigured into the new technology of a 3D printer, allowing you to forge ahead in making countless innovations?

Check out the video below for yourself to get a full picture of both the cleverness and real elegance in this design. Wayne will also be entering his 3D printer in the Instructables 3D Printing Contest 2016 sponsored with 3D Hubs, so you can find out more about his design there, as well as perhaps entering your own concept—maybe you too can put some of that not-yet-assembled furniture to use? Are you into IKEA hacking? Discuss further over in the 3D Printer Made with LACK Table from IKEA forum at 3DPB.com.