The new Z-2 spacesuit was inspired by ‘Tron.’

Well, folks, it really does look like we are going to Mars–and the people have spoken on fashion. In the first public vote on what astronauts will be sporting when they make their foray onto Mars, they can count on being suited up in Tron-reminiscent gear. This is a good thing for the spacemen of today, as these suits will allow them greater mobility and ease in navigating on the fourth planet from the sun. Not only that, but 3D printing will play an integral part in the design of the suit, the final choice being that of three designs presented for public consumption and voting by NASA for the update of the original Z-1 spacesuit.

Their three options were: With 233,431 votes, and over 63% of the total vote, the new and winning design was ‘Technology,’ and was the style used for updating the suit that is formally called the Z-2. Sounding somewhat like a fast sportscar, the allusion makes sense as the hope is that the astronauts will be able to get around ‘town’ faster while on Mars. They will also be able to get out of it with more facility due to a rear exit on the suit, and it offers some updates from their previous suit, still in grey, but also showing off red electroluminescent details that can be better seen in the dark. NASA states that the team will have “maximum astronaut productivity on a planetary surface – for exploring, collecting samples, and maneuvering in and out of habitats and rovers.”

The Z-3 will build upon ideas of both the Z-1 and the Z-2, and NASA has recently released more images and details about the winning Tron-inspired design from last year’s contest for the Z-2 design.

“‘Technology’ pays homage to spacesuit achievements of the past while incorporating subtle elements of the future,” states the NASA blog. “By using Luminex wire and light-emitting patches, this design puts a new spin on spacewalking standards such as ways to identify crew members.”

The Z-2 is 3D printed, and astronaut-specific. They will each be fitted after a 3D scan to assure a perfectly customized fit. And while it won’t skin-tight a la Matt Damon in The Martian, it will certainly be a much more modern improvement, offering greater efficiency and comfort–as much as is possible considering all the requirements of the suit, which is almost a machine in itself. It will hopefully makes itself available to a ‘suitport’ rather than the traditional airlock, allowing them to enter and exit modules in a more sterile manner as well. 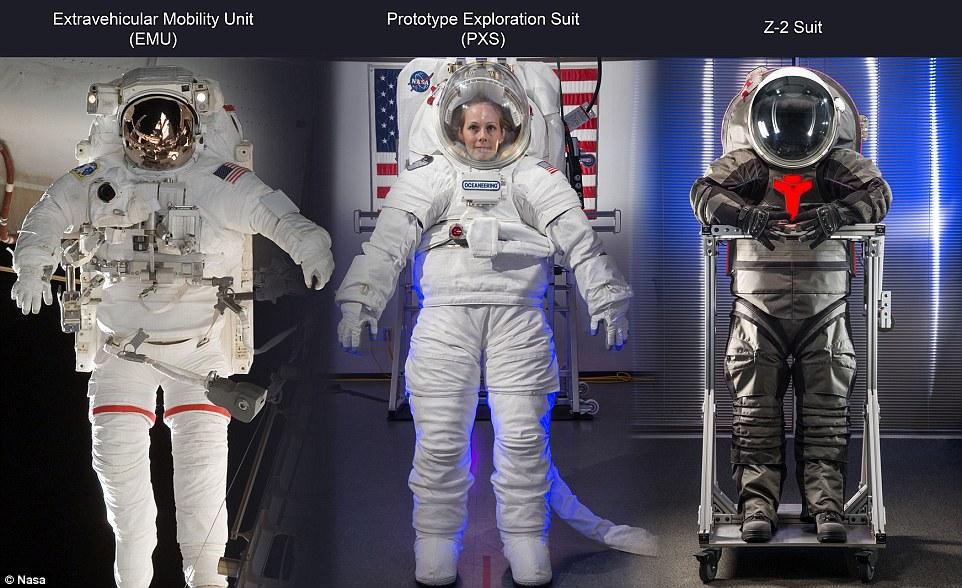 “NASA is developing the next generation of suit technologies that will enable deep space exploration by incorporating advancements such as regenerable carbon dioxide removal systems and water evaporation systems that more efficiently provide crew members with core necessities such as breathing air and temperature regulation,’ said NASA.

According to NASA, as the chosen design is tested at Houston’s Johnson Space Center, they expect its final iteration to involve all the following ‘firsts’ in a spacesuit: “As spacesuit engineers, [we] have found ourselves with an exciting opportunity: the chance to make a suit with a look unlike any suit ever built before,” said the NASA blog. “The designs were created with the intent to protect the suit and to highlight certain mobility features to aid suit testing.”

The suit cover uses innovative elements that are completely original to the Z-2, produced between ILC, NASA’s suit vendor, and Philadelphia University. The suit itself will also of course have numerous protective measures as part of its use, but will also provide support against impacts to the upper and lower torso. NASA will also be working on other suit designs to fit various exploratory missions and duties while on Mars.  Discuss this story in the NASA Z-Series Space Suit forum thread on 3DPB.com.