Hindu legend says that the deity Krishna, when a storm threatened his people, lifted India’s Mount Govardhana to shield the villagers from the rain, which lasted for seven days and seven nights. The legend has been widely depicted in various art forms, including a six-foot-tall, 2,000-pound stone stone statue, sculpted in the sixth century and now owned by the Cleveland Museum of Art. The museum purchased the sculpture in 1973, but it was fragmented and incomplete–until very recently, when 3D scanning and printing allowed for it to be fully restored.

When the museum acquired the statue, it was missing its arms and legs, the broken pieces of which were later rediscovered in the garden of a Belgian sculptor who had attempted his own failed reconstruction years ago. The Cleveland Museum of Art was able to restore most of the statue, including the legs and right arm, but they were unable to make a 432-pound fragment, which included the left hand holding up the mountain, fit. Concluding that the piece must not have been part of the original sculpture, the museum donated the fragment to the National Museum of Cambodia, which owns a similar statue. The Cambodian museum attached the fragment to its own statue, but experts in Phnom Penh were skeptical that the fragment was a good fit. In 2014, conservator Bernard Porte of the École Française d’extrême Orient suggested that the two museums submit stone samples for petrological analysis, which confirmed that the crystalline structure of the sandstone fragment perfectly matched that of the Cleveland statue. Conveniently, in 2014 the fragment was included in a Metropolitan Museum of Art exhibit on early Southeast Asian sculpture, and representatives from Cleveland were authorized to 3D scan it while it was in the country. A 3D scan was also taken of the statue in Cleveland, and the two pieces were digitally reattached on the screen. With assistance from Think[box], the engineering innovation lab at Case Western Reserve University, two 3D printed replicas of the statue and fragment were printed: one miniature, one life-sized. At both scales, the pieces fit together.

Sonya Quintanilla, curator of Indian and Southeast Asian art at the museum, said that she suspects the inability to fit the pieces together in 1973 was because, lacking today’s technology, the fragment was simply too heavy to adjust with the subtlety needed to ascertain a correct fit. With lightweight, 3D printed models, this wasn’t a problem.

When presented with the new evidence, National Museum of Cambodia director Kong Vireak agreed to return the fragment to Cleveland so that it could be reunited with the rest of the sculpture. In later October, the fragment was shipped back to the Cleveland Museum of Art, and the museum began the process of disassembling and reassembling the statue, making adjustments where needed to accommodate the new piece. Before any actual work takes place on the statue, the disassembly and reassembly will be done using the 3D printed models. 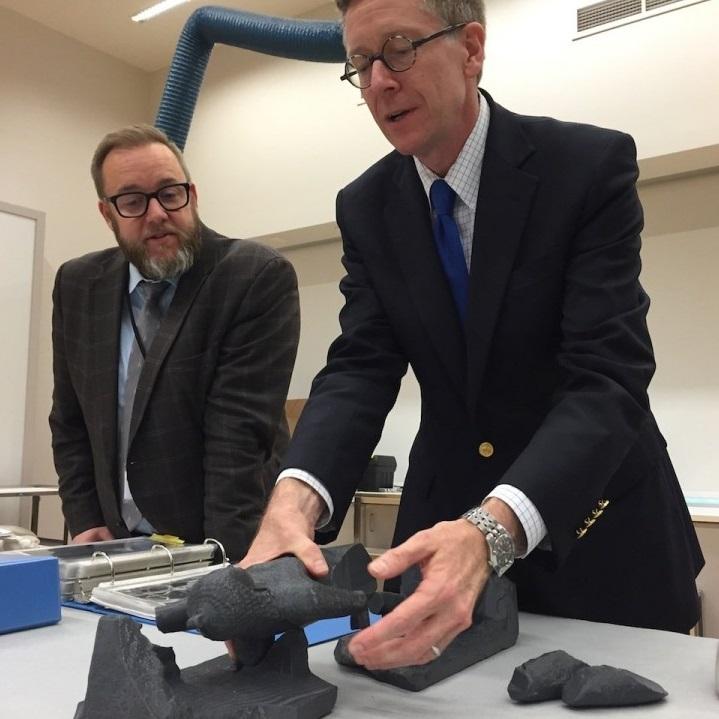 3D printing and scanning has been playing a large role for museums in digitizing and archiving collections. Now it’s becoming apparent that it can also be used to great success in the restoration of ancient artifacts. For the Cleveland Museum of Art, which recently underwent a multi-million dollar expansion, the restoration of a statue that has been incomplete since its acquisition seems to be part of a trend in revitalizing the city’s art.  Let’s hear your thoughts on this story here.