Any child of the ’70s or ’80s is probably going to be at least passingly familiar with the video game joystick. While early arcade games are where they were first seen, some of the first home video game systems made the joystick synonymous with gaming. As the home video game market grew, the joystick typified by Atari was an entire generation’s introduction to video games and is considered by most classic gamers to be the single best way to enjoy classic arcade games at home. These days, retro gaming is increasingly popular, and many are looking to recapture the functionality of the classic joystick.

Unfortunately that same generation, primarily their younger siblings, is painfully aware of what happens to most Atari joysticks that have been used too much. As arcade gaming from home continued to grow a more durable joystick was demanded, and eventually delivered by a Dutch company that manufactured parts for gaming, vending and casino machines. Suzo International created their Arcade line of joysticks primarily for the European electronics market, but because of its durable construction and reinforced steel stick it quickly became, and remains to this day, one of the most well-regarded joysticks on the market. The Prof Competition 9000 is their last model and remained largely unchanged from basic design, but unfortunately is hard to come by these days as they were originally included in computer gaming setups in the ’80s and ’90s. 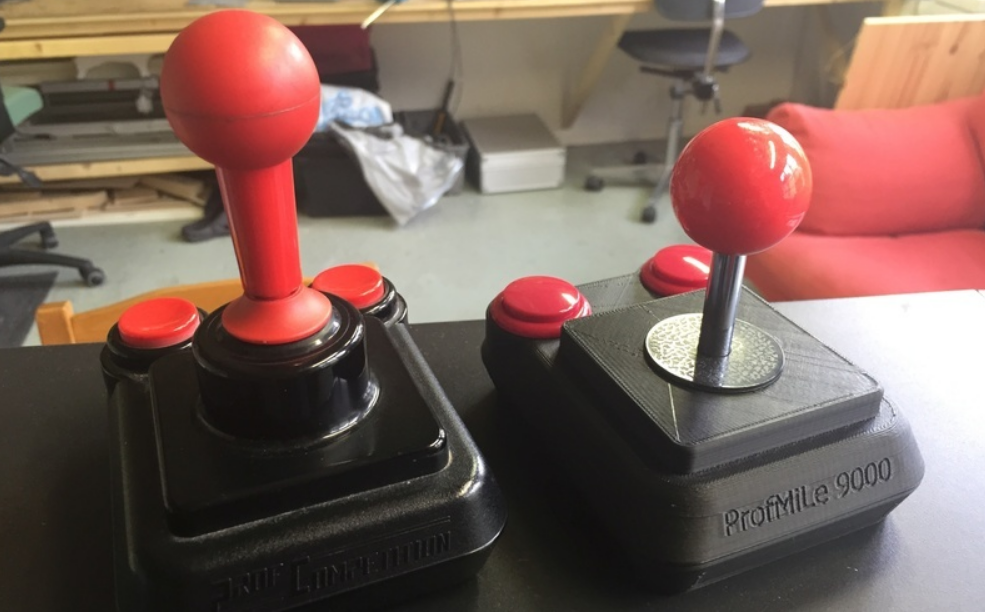 Retro gamer and Thingiverse user Mikko Leskinen was having trouble hunting down a Prof Competition 9000 joystick, so he decided to see if he could build his own. He found several build your own joystick tutorials online, but none of them resembled the iconic design of the Prof Competition 9000. The Finnish gamer was hoping for something that looked a little nicer than a box with a metal stick poking out of it. When he couldn’t find a design that suited him, he decided to just design his own using 3D printed parts and some inexpensive arcade parts that he sourced from eBay. “I’m electrical engineer, but I also make 3D design work for our products. I got my first 3D printer about year ago and I’m hooked to 3D printing ever since. The original Prof Competition 9000 were the original joysticks that came with my Commodore C64 in 1988. There was two of them. I used these same joysticks later with my Commodore Amiga. These have worked flawlessly for many years of hard gaming,” Leskinen explained when asked why he wanted to recreate the original design. Leskinen started by measuring his existing joystick with a set of calipers, and turned to Autodesk Inventor to create the 3D printable parts. Before 3D printing anything, he sourced the required internal parts on eBay and verified that they would fit into his 3D printed case. After making sure that everything would fit together, he printed everything out on his Geeetech Prusa i3 Reprap clone that he has heavily modified. Because it was a pretty straightforward shape and design he printed with a 0.2mm layer height to reduce print time. The case ended up requiring about six hours of printing for both parts of the case. Leskinen is very happy with the final product, and assures me that it works quite well.

“I played 15 stages of Giana Sisters without dying on Commodore C64, so I think it works pretty much as I expected. Of course the feel of this joystick is not exactly same as in original, but it is pretty good,” Leskinen says.

You can find more information about the rest of the parts needed to make your own Prof Competition 9000 joystick over on Thingiverse, as well as a simple wiring guide. You can also see more of his cool projects on his personal website. Were you always the younger sibling who got the broken joystick? What was your favorite gaming controller? Tell us about it and what you think of this project over on our 3D Printed Prof Competition 9000 Gaming Joystick forum thread at 3DPB.com.