I remember a few years ago when sites like Thingiverse first started to catch on. If you owned a 3D printer, this was a reason to begin using it a whole lot more. If you didn’t own one, it was a reason to go out and buy your first. No one could have imagined that in just a few years, 3D printing would have progressed as far as it has today. Thanks to new materials, new 3D printers, and the continual innovation by dozens of 3D printer manufacturers out there, the space, which was originally filled with just “hackers” and “makers,” has suddenly become one that is attractive to just about anyone. If you are a designer, engineer, student, model maker, or almost anything else, there is now a reason to go out and buy a 3D printer.

For those of you familiar with MakerBot co-founder Bre Pettis, you probably either love the guy or hate him. After selling his company to 3D printing industry mainstay Stratasys, many people criticized him for taking a company he built up and handing it over to a larger corporation. Personally I can’t blame Pettis one bit. I too would have been enticed by $403 million and the opportunity to work with and have the backing of one of the world’s most recognized 3D printing companies.  To me this would seem like a match made in heaven.

Pettis, who no longer is running things for MakerBot, is still with Stratasys, and he has been presented with the opportunity of using that same creative mind that led him to develop the MakerBot line of 3D printers, in order to show the world all of the amazing things that 3D printing can do. As the head of Stratasys’ Innovation Workshop, Bold Machines, Pettis, General Manager Robert Steiner, and the rest of the team have been putting out some truly incredible things. During these past two weeks, they have been gradually releasing some of these to the public, and today is no different.

Today, Bold Machines has unveiled an incredible 3D printed castle. Based on two German castles; Schloss Lichtenstein and the Neuschwanstein Castle, this design was 3D printed in one piece on a MakerBot Replicator Z18, but is designed in such a way that it can actually be printed on smaller 3D printers such as the MakerBot Replicator 2 as well. If printed on a smaller machine, it is broken down into multiple parts which will then need to be assembled. 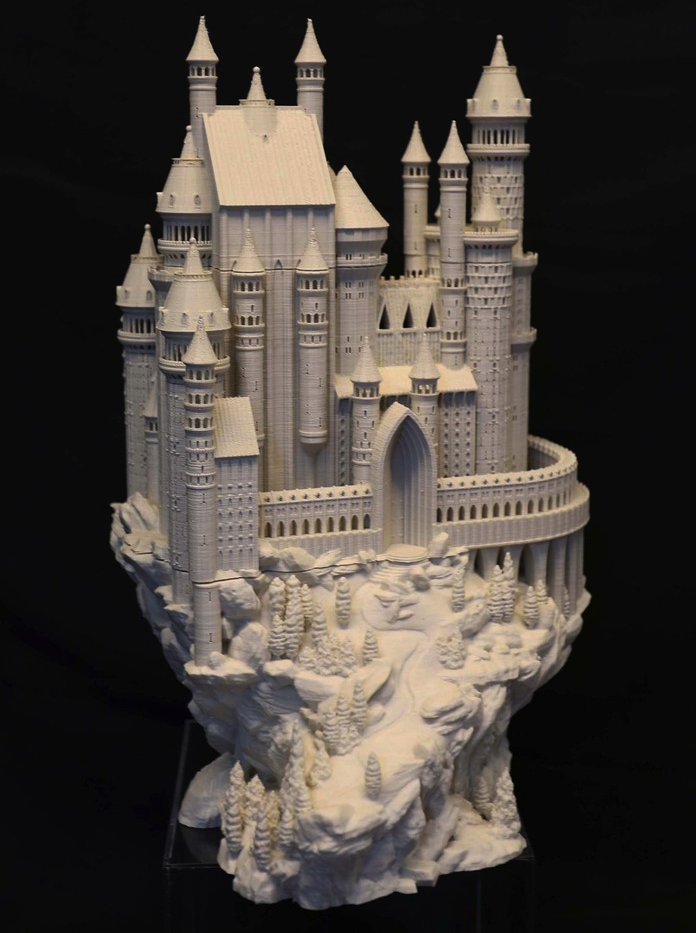 “This Medieval Castle print was modeled from two European castles that are both majestic and have some very interesting construction and incredible views,” Robert Steiner tells 3DPrint.com.

The detail in this incredible castle, as you can see, is just incredible, and all of it should be able to be printed out on your own desktop 3D printer, if you desire. Bold Machines has made the 3D printable files for this castle available to download free of charge on Thingiverse.

Have you 3D printed your own castle? What do you think of the design? We’d love to see your results in the 3D Printed Castle forum thread on 3DPB.com.