Sketchfab is a 3D model website that has over 200,000 different models listed on it. Because of its wide selection, companies and individuals are looking to it more and more for 3D printable content. Here, we cover some of Sketchfab’s most popular, downloadable, 3D printable files for the month of May, including two heroic icons, one superhero, Microsoft’s latest uploaded models, and one extinct and one near extinct beast of the wild.  Check them all out below: This Eric Snowden bust commemorates the whistleblower who exposed the National Security Administration’s spying program on U.S. citizens.  A hero to many, the 3D bust model is also accompanied by a statue that, according to James, is called “Prison Ship Martyrs’ Monument 2.0” and was illegally-installed in Fort Greene Park, in Brooklyn, on April 6, 2015. “It was attached to a Doric column on the perimeter of the park’s Prison Ship Martyrs’ Monument, a memorial which honors more than 11,500 American prisoners of war who died in the American Revolution.” Its installation was fleeting, but you can print your own bust or statue of this now legendary American hero. Speaking of heroes, Sketchfab user jvouillon scanned and modeled a statue of iconic nonviolent revolutionary, Mahatma Ghandi, who led the fight to decolonize India.  The statue is situated at the Canadian Museum for Human Rights’ entrance in Winnipeg, Manitoba. It was scanned with an iPad with the Structure Sensor plus iSeez3D, and it is another of your top viewed 3D printable models from Sketchfab. Microsoft routinely uploads 3D models to Sketchfab and they are quite popular. For example, the most recent uploads have been a simple violin, tuba and drum and three different models for eyeglasses. A few weeks ago, Microsoft uploaded a whole Western theme including bronco, cowboy hat, pistol, and a sheriff’s badge was even included! I guess you’ll never know what to expect from Microsoft’s 3D model designers, as they keep people checking out their model page repeatedly. Superheroes are always popular, and gaelkerchy delivers with a small Spiderman toy that is as determined as any I have seen. With clenched face and his usual serious disposition, this Spiderman means business. He is also quite likely to make collectors of 3D printable superhero models quite happy! The first recorded mention of the now extinct Dodo bird was in 1598. This Dodo has been in London’s Horniman Museum since 1938. The head and feet are cast in plaster, and they are attached to a body covered with bird feathers; whole chicken wings are added, too. The tail is made from tufts of ostrich or goose feathers. The Museum explains that most Dodo models are based on scientifically inaccurate paintings. Now, we know that Dodos were probably much slimmer than this specimen and had longer legs, but the legendary bird makes for great 3D modeling either way, doesn’t it? From the extinct Dodo to the near extinct Rhino, this final model is from Paris’ Orsay Museum collection. This model is detailed, giving the Rhino a regal stance upon a rock as it presumably surveys its domain. Sad that one day all we may have left are our models of these majestic animals, but at least 3D design, modeling, and printing can capture the details of endangered animals for posterity’s sake.

Which of these models are your favorite?  Let us know in the May Sketchfab forum thread on 3DPB.com. 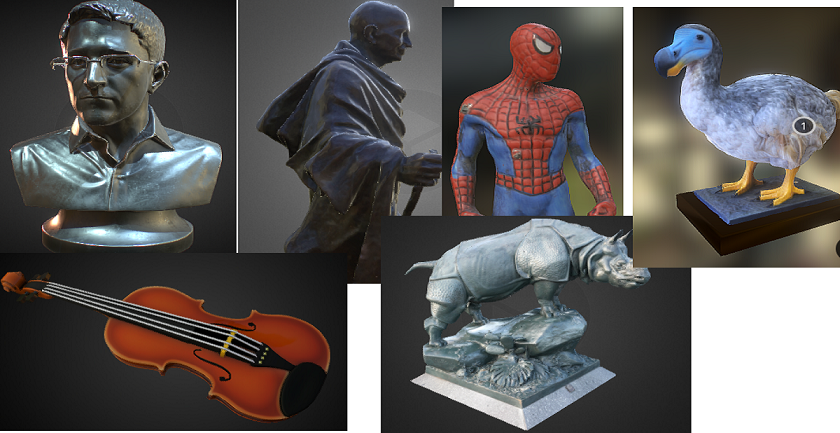