If you have ever wrapped your textbooks in contact paper, or attempted to place a screen cover on your smartphone, you’re probably painfully familiar with the frustrating bubbles that are created when air becomes trapped under the plastic. Sometimes it would seem nearly impossible to apply those clear sheets correctly and end up with an evenly finished surface.

In the world of 3D printing, more specifically the FDM (Fused Deposition Modeling) process, a common analog could be the imperfections that occur from the layering of the filament during the printing process. Known as “steps” or “stair-stepping,” these artifacts occur when the printer completes one layer and moves up on the Z axis to start the next one, creating visible lines on the surface of the object. Owners of FDM printers, such as from MakerBot or Solidoodle, are probably all-too-familiar with this issue. 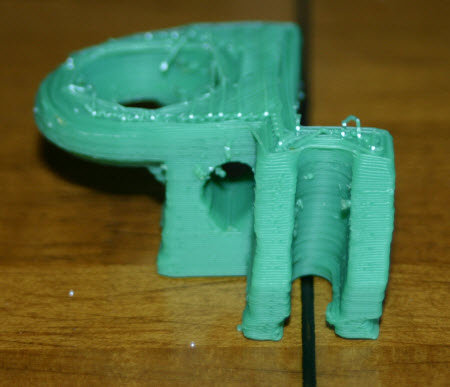 The “stepping” problem is clearly an area where FDM printers could be improved. Companies like 5AxisWorks are trying to solve the issue through hardware like their 5-axis printer, and Topolabs is developing software that tries to tackle the issue as well.

Now, a patent application that was filed by Adobe Systems Inc. back in September 2013 has just been published online. The patent is for several claims which will enable a Fused Deposition Modeling 3D printer to create a much smoother external surface on printed objects. The invention, credited to Radomir Mech, and filed for by Adobe Industries Inc., a popular American multinational computer software company, could provide a number of benefits to those using FDM 3D printers. The abstract of the invention reads as follows:

The four main claims put forth in the patent application are:

This is not Adobe’s only foray into the field of 3D printing. In October, they announced 3D printing features for their extremely popular Photoshop software, which could integrate well with the claims described in this patent. They have also had several 3D printing-related partnerships, such as the one last year with Sculpteo, and have also partnered with artists like Bitoni for purely creative pursuits.

It will be interesting to see how Adobe integrates the ideas from this patent into their wide range of products and processes. By successfully implementing these techniques, Adobe could push the boundaries of FDM printing and greatly improve the quality of the printed objects.

Let us know what you think about this latest in 3D printing patent filings in the Adobe Smooth 3D Printing Patent forum thread over at 3DPB.com.