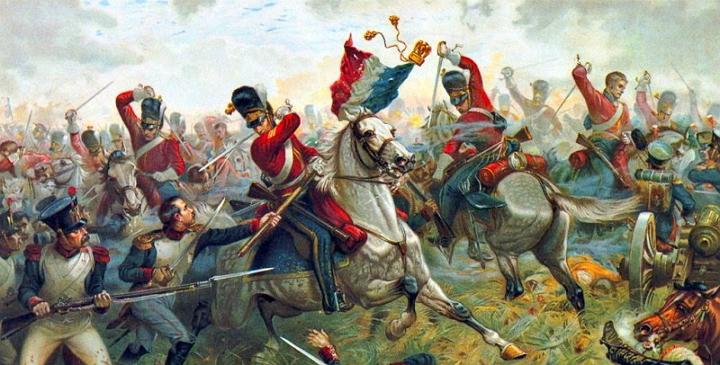 Very shortly after his coronation in December of 1804, Napoleon Bonaparte commissioned and then distributed eagles, which were based on the aquila of the Roman Legions, to his army. The gold standards were meant to inspire pride and loyalty among the troops, and Bonaparte gave an emotional speech to his army calling on them to defend the golden eagles atop the French flag with their very lives. Originally designed by sculptor Antoine-Denis Chaudet, copies of the eagle standards were cast by Pierre-Philippe Thomire. The bronze sculptures of an eagle on a plinth, one claw resting on “Jupiter’s spindle,” each weighed around 4 pounds, and they were mounted on top of the blue regimental flagpole. Created from 6 separately cast pieces, they measured about a foot in height and 10 inches in width. At the base of each eagle was the number of a regiment.

It was common knowledge among the soldiers that to lose the eagle in battle meant shame would rain down upon a regiment.

When Louis XVIII deposed Bonaparte, he ordered all of the eagles destroyed, so only a few survived, but when the former emperor regained power in 1815, he had a new run of the eagles produced.

This eagle standard of the French 105th Infantry Regiment was ultimately captured by Captain A K Clark of the English Royal Dragoons at the Battle of Waterloo, the last great battle of the Napoleonic Wars. The capture of the eagle essentially marked the end of French power in Europe.

Now the two imperial eagles captured from Bonaparte’s army have been recreated with 3D printing by a famed London firm to celebrate the 200th anniversary of the Battle of Waterloo.

The eagles were scanned and finished by the master craftsmen at Hare & Humphreys, a decorating and gilding company based in London, to create faithful duplicates of the eagles in the collection at the National Army Museum. The plastic copies were printed by iMakr, a 3D printing service bureau and store in London, then gilded by Hare & Humphreys.

Peter Hare, the managing director of Hare & Humphreys, says the quality of the replicas — which were hand-gilded with a pair of 23.5 karat gold leaf layers — was amazing.

“It makes it very special if you think this was the actual piece that was dragged from the clutches of a dying man,” Hare told the London Evening Standard. “That is why it is very much commemoration rather than celebration.”