When I think about the potential that 3D printing has in making a difference just about anywhere in the world, Thingiverse is a website that I believe will have its fair share in this movement. The movement that I refer to is the “open source” movement. Thingiverse and its open source nature allows anyone, anywhere in the world to create a 3D printable model of an object, and then post it for anyone else to download, modify, and/or completely reengineer. Once these iterations take place, the modified versions can then be uploaded again in order for the next person to come along and improve upon that.

Not only does this process allow for the continual iteration of an object, but it allows for anyone with varying degrees of engineering and design experience to put their spin on that object, potentially making it even better than before. If we continue to see the progress that we have been within the Thingiverse ecosystem, there may be a day when virtually every type of object could be made available to anyone with a 3D printer.

In December, we reported on a fully articulated 3D printable doll that a designer named Sonia Verdú had uploaded to Thingiverse. The doll was called Robotica, and it featured over 15 different 3D printable files which, when all printed, fit together using ball joints and sockets. The doll required no glue or other means of assembly. Since the files went live on Thingiverse on December 29th, 2014, they have been downloaded a staggering 11,669 times (as of the time of writing).

Designer Sonia Verdú even took the open source licensing a step further, permitting people to sell these 3D printed Robotica dolls, for profit, as long as they donate 10% of sales to a charity.

When I first saw this doll, I wondered how people would iterate upon a design that seemed to be so perfect as is. I thought that perhaps we wouldn’t see any designers modifying Verdú’s initial design at all. Boy was I wrong!

One South African company, called CAD House, has not only iterated upon the original Robotica design, but they have done so in a huge way…quite literally. “We decided to 3D Print ‪Robotica‬ as large as we possibly could using the 3D Printers available to us, without the need to split parts up and glue them back together,” explained a representative from CAD House. “It turns out [that by] scaling Robotica by a factor of 5, she ends up being approximately 1.7 meters (5 1/2 feet) tall.”

So this is exactly what CAD House set out to achieve. While they are a distributor of 3D Systems’ printers in South Africa, they set out to accomplish their goal of 3D printing this full-sized Robotica doll using nothing but FFF-based desktop 3D printers.

All in all, it took them about 240 hours of print time, and about 4kg of gold PLA filament (approximately 4 spools), to finish the 5’6″ tall fully articulated doll. To do so, several 3D printers were used, primarily the WanHao Duplicator 5S and 5S mini, and when complete, all of the parts fit together seamlessly, creating this huge, one-of-a-kind doll that its original designer, Sonia Verdú, would certainly be proud of. Full-sized Robotica can be placed in virtually any position imaginable because of her cleverly crafted ball-joint and socket design. Much of the process was documented on Robotica’s Facebook page, too.

What do you think about this incredible 3D printed full-size doll? Will we see further iterations upon this doll’s design? Discuss in the 3D Printed Full-Sized Robotica forum thread on 3DPB.com. Check out some more photos of this incredible creation below. 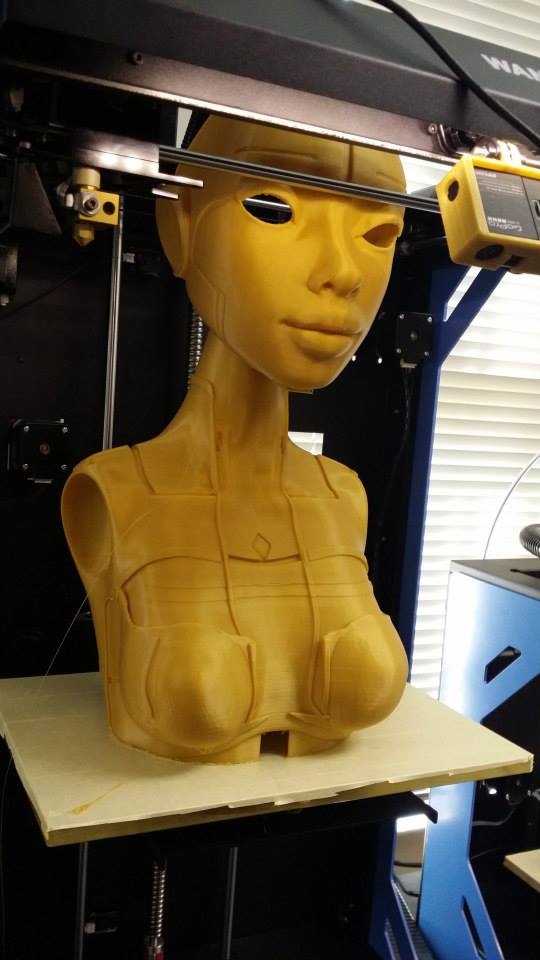 3D printing with continuous reinforcement fibers, like carbon fiber, is just now starting to come into its own, with numerous startups developing their own unique approaches to the concept. Their...

Youbionic, founded in 2015, has recently released its new Human Arm. The wildly creative Italian tech startup is on a mission to accentuate already sophisticated technology around the world, while...

As 3D printing and electronics continue to advance—along with robotics—soft actuators are becoming a great subject of study, as thesis student Hong Fai Lau outlines in the recently published ‘3D-Printed...