The clash between bioprinting pioneer and powerhouse have come to an end. San Diego, California-based Organovo Holdings, Inc. (Nasdaq: ONVO) and Gothenburg, Sweden-based BICO (OTCPK: CLLKF, Nasdaq Stockholm: BICO.ST) have announced they have reached an agreement for the latter to license the patent portfolio of the former. Upon news of the deal, Organovo stock jumped 49.7 percent.

In 2021, the two bioprinting firms were involved in several legal disputes, with BICO, formerly Cellink, making a sealed complaint against Organovo that would later be revealed to be a patent infringement suit. This led to a countersuit demanding royalties against the Swedish company, which was in the midst of building itself out well beyond its original bioprinting efforts.

As Cellink became a wholly-owned subsidiary of the larger BICO Group, Organovo was faltering. The first publicly traded and globally known bioprinting company, Organovo was established in 2007 with technology licensed from its founder, Gabor Forgacs, and Thomas Boland of Clemson University. 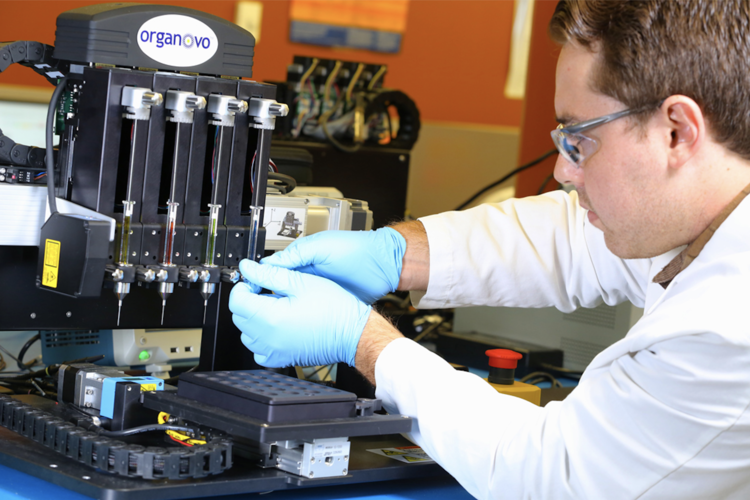 For some time, the California startup was on a fast track toward massive success, as pharmaceutical companies relied on its deposition-based 3D printing technology to perform drug research and development. However, this bioprinting process proved problematic and, in 2019, the company was forced to seek “strategic alternatives” to its liver 3D printing program.

The CEO at the time, Taylor J. Crouch, said, “After a rigorous assessment of our liver therapeutic tissue program, we’ve concluded that the variability of biological performance and related duration of potential benefits presents development challenges and lengthy timelines that no longer support an attractive opportunity given our resources.”

In August 2019, all research and development was terminated and nearly 70 percent of staff was laid off. The firm considered performing reverse merger with Tarveda Therapeutics – a privately held cancer drug developer. To prevent this, Organovo’s original CEO, Keith Murphy, who had already left the company, wrote a letter to stakeholders to argue against the move. Murphy told 3DPrint.com that the deal would put the company in a “weak financial position with unexciting technology and unattractive prospects.” Before the lawsuits began, Murphy was back with the company as Executive Chairman of the Board. Now that the legal disputes are over, Organovo granting BICO “a worldwide, non-exclusive, non-sub-licensable, non-transferable perpetual, irrevocable, license under the Company’s patents that were the subject of the Actions…with respect to products based on the Licensed Patents…in all fields of use under any BICO brand.” BICO is also paying Organovo $1.5 million up front and will pay royalties “in the range of low to high single digit percentages of net sales of the Licensed Products.”

Now, all civil actions have been dismissed and/or dropped and the two companies have released each other from all previous claims. Organovo Executive Chairman Keith Murphy commented, “Organovo celebrates the success of CELLINK’s bioprinting product lines in opening up the horizons of 3D bioprinting to customers. We are proud to be a part of enabling CELLINK and BICO to grow these products and we look forward with excitement to their next generation of bioprinters.”

The purported reason for the agreement is as follows: “In order to broaden the impact of the technology and serve the needs of a broad array of researchers and other users of bioprinting, the company seeks to make these patents available for license to first rate bioprinter developers.”

Of course, lawsuits are part and parcel with any industry and have played an important part of 3D printing history. For instance, there have been a number of famous legal disputes between such companies as 3D Systems and EOS, as well as EOS, Trumpf and Concept Laser. More recently, Formlabs was the subject of patent infringement suits by 3D Systems and EnvisionTEC. Once these disputes achieved resolution, the companies more or less moved forward with their respective technologies and, as far as I can tell, enjoyed success from them.

From the language, it’s hard to know if this applies to the new BIO CELLX system from CELLINK. The printer is a high-throughput deposition system that relies on the same technology as the preceding BIO X, named in the lawsuit. It sounds as though Organovo will have at least some funds to keep itself going as BICO continues its journey forward. It’s hard to know exactly what that means for the bioprinting pioneer, which seems to be little more than an IP holder at this point. It could serve as a small source of cash as board members pursue other endeavors or the rebuilding of a once promising company into something formidable once again.