Pioneering bioprinting firm Cellink, now part of a larger company rebranded as BICO (short for bioconvergence), has already been making quite a name for itself and is preparing to capture an even larger share of the biotechnology market in the next decades. Headquartered in Sweden and Boston, BICO is immersed in an intensive expansion strategy that involves serially acquiring strategic businesses with opportunities in three main subsidiaries: bioprinting, biosciences, and bioautomation, all of which could help stimulate incremental demand.

With BICO as the parent company overseeing 11 subsidiaries, including Cellink, co-founder and CEO Erik Gatenholm said the new name reflects a strategic business plan that could revolutionize the segment within healthcare and research in life sciences. The move clearly translates into a growing pipeline of upcoming acquisitions. The latest one being Advanced BioMatrix, a California-based life sciences company that uses 3D applications for tissue culture, cell assay, bioprinting, and cell proliferation. 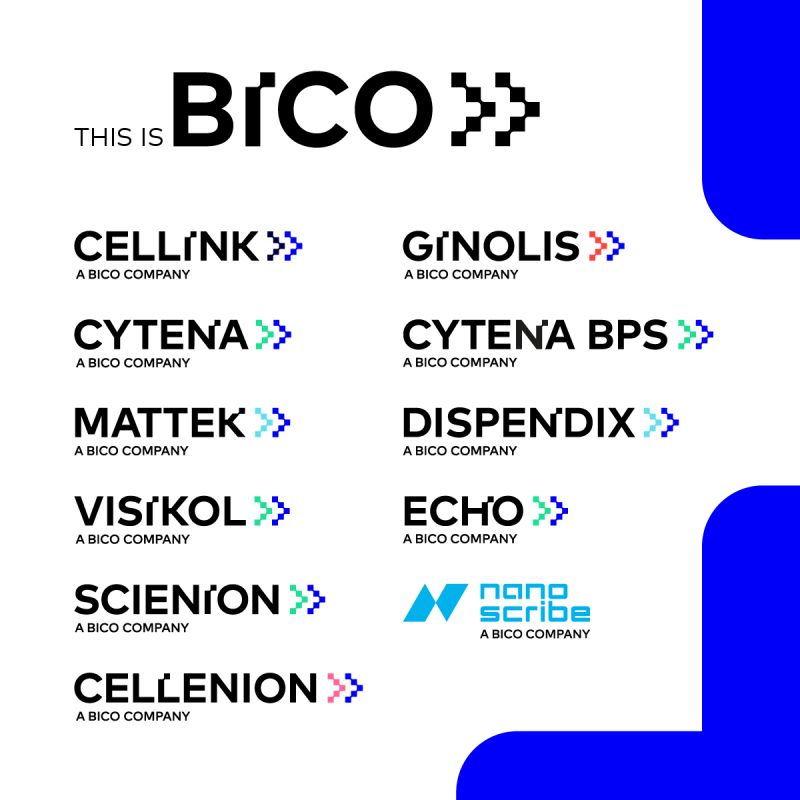 Parent company BICO and its 11 subsidiaries. Image courtesy of BICO.

On August 27, 2021, BICO announced the purchase of Advance BioMatrix for $15 million, which marks the sixth startup bought by the company this year alone and builds on all the previous acquisitions. For example, in the past, Cellink had snapped up single-cell technologies developer Cytena in 2019 for €30.25 million ($35.8 million) before acquiring precision dispensing company Scienion AG a year later for €80 million ($95 million).

The new deal will ensure a market-leading portfolio of reagents and bioinks, particularly of high-quality collagen and collagen inks intended for 3D bioprinting, and further strengthen its status as a leader in bioconvergence.

Moreover, according to Gatenholm, together with Advanced BioMatrix, BICO will create the market’s “leading offering in bioinks and reagents” and continue to develop innovative consumables for its customers in over 65 countries, which include more than 2,000 laboratories and the top 20 pharmaceutical companies in the world. Venturing on developing innovative biomaterials for various bioprinting applications will be critical to generate new product developments that will help solve major health challenges, says Gatenholm. Like with all other acquisitions, following the transaction, Advanced BioMatrix will keep its name and management as a subsidiary of Cellink and become part of the bioprinting vertical business area. As a result, BICO investors will see the business integrated into the financial reporting as of August 2021.

As part of the transition from the renowned Cellink name to BICO, the company’s ticker symbol on the Nasdaq Stockholm has also changed, from CLNK to BICO, revealing the full transition. Moving forward, the company will be focused on five central areas, including enabling safer and accessible organ transplants, using cultivated tissue from human cells to eliminate unnecessary animal testing, accelerating the development of more affordable medicines, more personalized medication, as well as faster and less expensive diagnostics to fight infectious diseases.

Following up on its desire to lead the bioconvergence niche, Cellink has assembled an impressive scientific advisory board, comprised of Massachusetts Institute of Technology (MIT) Professor and Moderna Co-Founder Robert Langer; leader in the field of immunogenomics and pioneering developer of single-cell genomic technologies Ido Amit; Bayer HealthCare Chairman Rolf Classon; CEO of the Terasaki Institute for Biomedical Innovation and Harvard-MIT Professor Ali Khademhosseini, and Wake Forest School of Medicine Professor David Williams. Together, BICO and its board of renowned scientists will ensure the company’s work can withstand the highest level of scrutiny by the scientific community, regulators, and consumers. “Today’s healthcare challenges require complex and multifaceted solutions. The bioconvergence principle embodies this novel approach and will enable researchers to uncover the answers to shape the future of health,” stated Langer. “I’m excited to continue to work with BICO and am eager to see the progress they make.”

As BICO continues to evolve from a startup to the billion-dollar organization it is today,  its objective is to take the bioconvergence revolution to the next level by offering customers a diversified portfolio and a wealth of experience in producing biomaterials, bioinks, and other life science products. At this rate, by year’s end, we can expect to hear more news of further acquisitions and company offerings.

By sending this form, you consent to share its content with Aniwaa and its trusted partners.
<link rel='stylesheet' id='gforms_formsmain_css-css' href='https://