Janne Kyttanen is a pioneering designer in 3D printing who has brought us some of the world’s first 3D printed furniture, lamps, consumer objects and textiles. As an independent designer and working with Materialise and later 3D Systems, to whom he sold his company FOC, Janne has left his mark on our industry. Right now Janne is onto the next big thing and he believes that to be value networks. Instead of focusing on one business taking all of the initiative, cost and reaping all of the benefits of a project, technology or development, Janne envisions more of a cooperative business model. He believes in looking beyond the firm and harnessing the agility of 3D printing to co-create innovation alongside partners. This is something that I’m intensely skeptical about. Can you really get partners along the value network to work together to innovate? How do you effectively get firms with diverging interests to work together? Won’t the whole thing collapse in a meetings morass or under reams of contracts? 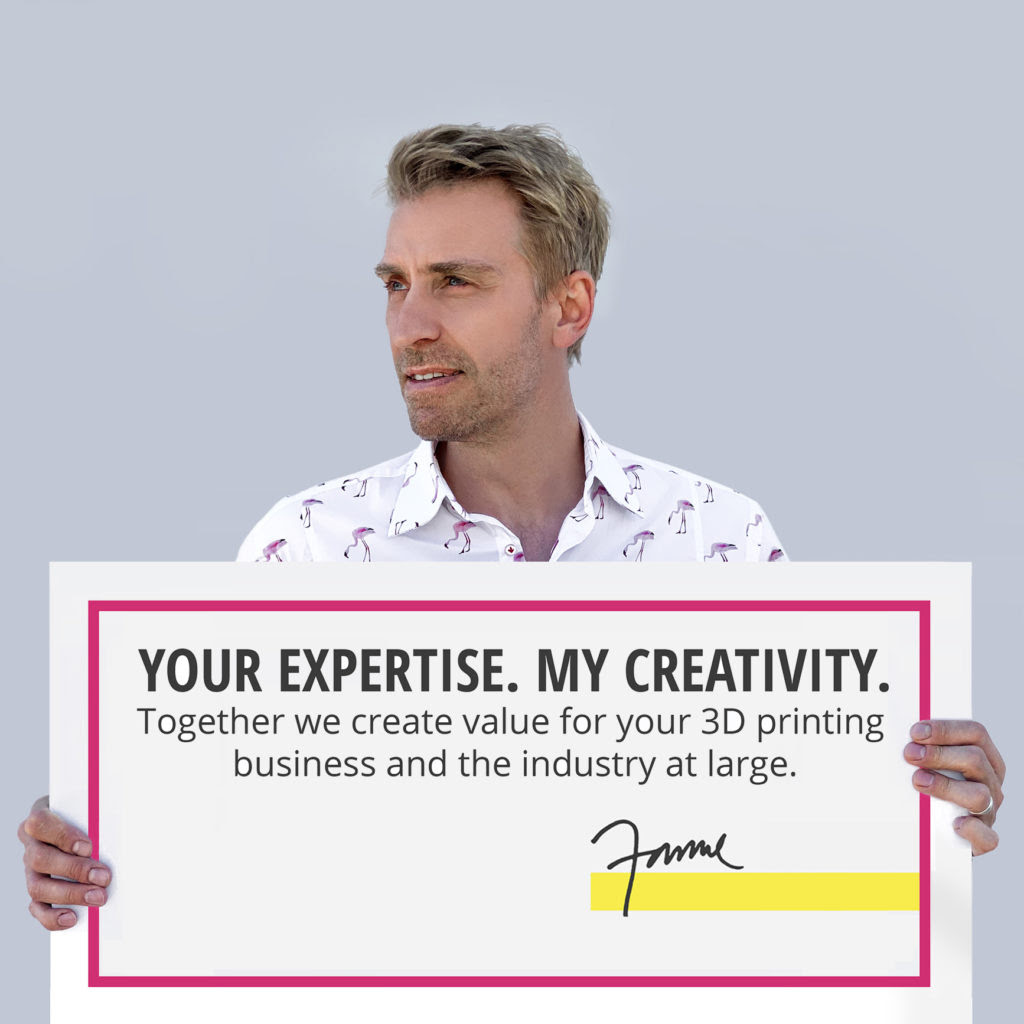 In order to show us what he means and demonstrate that value networks could be used to create innovative businesses, we will be doing a series together with Janne. For the duration of the year, Janne will be showcasing his business ideas, teaching the concepts of value networks and actually trying to get some value networks innovation off the ground. He will then share with us his steps and progress. He’ll interview leading executives to see what they think, share his business ideas with us, and seek out partnerships. We’re calling this series Live Entrepreneurship since Janne will be sharing his continued progress. In order to kick this off, we interviewed him so that he could tell us what it was all about.

So what again are value networks?

It really boils down to one understanding that collaboration creates more abundance for everybody rather than looking at each other as competitors or transactional customers. When one compasses that mindset, blue ocean strategy ideas start flooding in.

What is the current state of 3D printing markets?

A lot of excitement going on, but I see a lot of incremental developments going on and when one has an incremental mindset, don’t expect any exponential opportunities to arise.

What do you hope to change? And, how will you change things?

People to start thinking beyond engineering solutions, think bigger, across boundaries and blend categories which open up new blue ocean markets. Hopefully through leading by example.

Why are value networks important?

They are nothing new, but they are still very new for the 3D printing industry. Give you an example. If I have an application for something, which can create an exponential scale, but if the material cost is too high, nobody makes anything and the industry won’t progress. It only makes sense for the parties to come together in a collective manner and creating value together for a new market rather than focusing on narrow minded transactions between parties.

Why should I care?

When are they advantageous?

When there is proven scale for a new product or service and an equity share creates more profit for everybody rather than transactional business between two parties.

Does this mean that I could raise less money and work with others?

Yes indeed. Let me give you an example of how 3 parties can come together and create a blue ocean value network business together.

Party A has a factory, which makes machines with 5x margin

Party A sells the machine to Party B, which creates things with 5x margin to a channel.

Let’s assume, I have an application, which can create 100x value for both Party A and B, but it doesn’t make any sense for me to start raising money for building a factory, which already exists or in building a channel, which somebody has spent decades creating. Nobody really has to make big investments, but it all boils down to connecting the dots and parties coming together around a round table in a transparent manner.

In the course of this series, I will openly lay down examples how it can work, but also show how linear thinking and companies not being able to flex around their existing business models, will also kill a lot of good ideas.

My tagline for 2020 is: Your expertise. My creativity. Together we create value for your 3D printing business and the industry at large. What this means, is that I used to know nothing about the construction world or food production for that matter. When people with totally different perspectives and backgrounds come together, you create magic. As one of the big ice cream producers literally told me, “the disruption had to come from the outside”. You just gotta draw a fine line between when to listen and when to fight. These ice cream makers saw what we were trying to do and their initial reaction was: that’s not how you make ice cream. We have been making ice cream for 100 years. We know how to do it.

So this is already happening?

It’s the same thing in 3D printing too. Makerbot is a classic example of a company, which carved out a new market in an old industry.. Stratasys could have created a plywood 3D printer as a weekend project, but since their channel didn’t see value in low price – low quality machines, why would they make such device? Makerbot managed to sell a dream to the makers.

Aligntech is a good example of where and why I would like the industry to open their eyes for. While dental may seem like a killer market for the 3D printing industry, it actually makes little on teeth, if you compare to Align, which generates 1.5bln in annual sales with just one product…”selling smiles”, not selling technology.

What I mean is that when people have the ability to dream big, things happen. There is a good quote in the Moonshots book by Naveen Jain, where he asks which is an easier business: a business with an incremental growth potential, say a corner café or a mission to mars. Most people would say that the corner café is an easier business, where in his opinion most get it wrong. A corner café has X amount of seats and your growth is limited and one is cut throat from the start. Whereas getting finance and big people behind your big plans going to Mars is far easier than getting finance for your corner café.

We’re really looking forward to hearing more from Janne in this series!

By sending this form, you consent to share its content with Aniwaa and its trusted partners.
<script type='text/javascript' src='https://3dprint.com/wp-includes/js/dist/dom-ready.min.js?ver=71883072590656