Was the Gun Used to Kill a Rhode Island Woman 3D Printed or Not? The topic of 3D printed guns has long been an intensely controversial issue. There are plenty of industry professionals who believe that 3D printed guns are not nearly as big of a threat as many want us to believe, and that they will continue to exist no matter what kind of legislation tries to stand in the way. Some people are putting in interesting research, and trying to keep us safe from 3D printed guns, while it’s business as usual for some, and others are trying to cash in on the controversy in the entertainment world.

Last summer, the pot got stirred again with the news of a settlement between the US State Department and Texas open source 3D printed gun designer Defense Distributed, run by Cody Wilson, which determined that the non-profit organization can publish files, plans, and 3D drawings of guns in any form.

Now we’ve got a new issue – a 3D printed gun was allegedly used to kill a woman in Rhode Island last week. 23-year-old Jack Doherty and 18-year-old Shaylyn Moran have been arrested and are facing charges after using what police believe was a 3D printed 9 mm gun to kill 54-year-old Cheryl Smith.

There are so many weird things about this story – first off, Smith was the mother of Moran’s ex-boyfriend Leonard Troufield, 21. The Providence Journal reported that some sort of domestic incident took place between Moran and Troufield in October, and that Troufield was charged with disorderly conduct, as well as domestic simple assault and battery.

According to People, Doherty, of Albany, NY, and Moran, of Pawtucket, RI, only met recently, with Moran’s Facebook corroborating this point with a post from December 31st, 2019 stating that she was about to “meet Jack.” Apparently, the couple became engaged only hours before going to Smith’s home in Pawtucket on New Year’s Day with what police believe was a 3D printed gun. At 8:15 pm on January 1st, police responded to a 911 call at Smith’s home and found her suffering from multiple gunshot wounds to the chest; the glass in her front door had been shattered as well. She was pronounced dead at Rhode Island Hospital soon after.

“I thought someone just got whacked in an accident out there on the street, and left it at that,” Smith’s neighbor, 84-year-old Charles Purcell, explained when he said he heard the shot. “Then my grandson came running downstairs and said, ‘Grandpa, I heard three gunshots, and they seemed to have come from next door.'”

Boston.com reports that police “saw a black man in dark clothing leaving the scene,” and heard that he was likely staying at a Hampton Inn nearby. They found Doherty and Moran there and arrested them; Doherty apparently attempted to charge Pawtucket police Detective Justin Gould, who quickly subdued him. 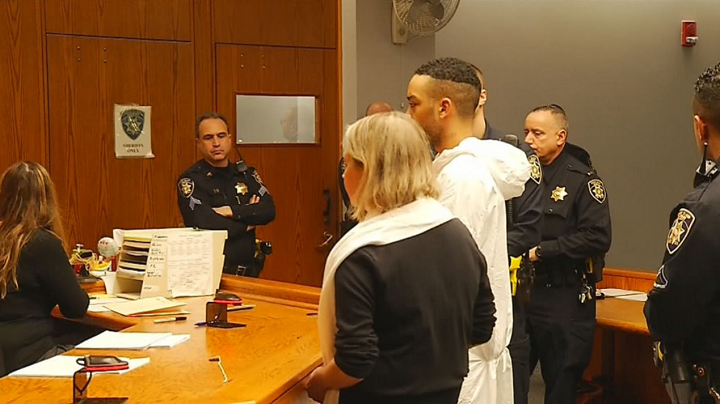 The police said they found the 9 mm gun in Doherty’s possession upon his arrest. Detective Sgt. Christopher E. LeFort said that the firearm was similar to a greenish one Doherty was holding in another Facebook post. He was charged with seven counts, including first-degree murder, conspiracy, carrying a pistol or revolver without a license or permit, and resisting arrest and assault and battery, while Moran was charged with conspiracy and first-degree murder. After being assigned public defenders, the murderous pair was arraigned last week. Neither Moran nor Doherty has entered a plea, and they are being held without bail, with their next scheduled court date on January 16th.

Another odd thing about this case is that Moran’s ex-boyfriend Troufield was at his mother’s house when she was shot – so why didn’t they kill him as well?  LeFort said that the police are not yet ready to answer.

So, although this is a very sad story, here’s the part you all are probably really interested in – was the weapon found on Doherty during his arrest 3D printed or not? Shawn on LooseRounds.com had some strong words to say about it, writing that “Cops being cops, 99.9 percent of them wouldn’t know a 3D printed gun if they took it out of the printer themselves.” He quoted Lefort, stating that the detective said investigators are still examining the gun, which “appears” to have been 3D printed. He followed up with another strong statement: “In other words, they have no idea.” A forum on AR15.com links to an article on Motif, which said that its investigation “casts serious doubt” on whether this gun was actually 3D printed.

“In response to our inquiry, Detective Sergeant Christopher LeFort of the Pawtucket Police Department Major Crimes Unit told Motif in an e-mail message, ‘As to the firearm, further examination and testing will be conducted to determine if in fact it is a 3D-printed firearm or some other make-at-home kit,'” the magazine states.

The Providence-based magazine also reached out to local firearms and law expert James Archer, who was careful to note that his opinion is only based on looking at pictures of the gun, and not the weapon itself:

“If the implication is that the gun was printed on a hobby [plastic] printer, then much of it could not have been. Also, 3D-printed guns typically work for a few shots and then fall apart. Assuming it’s true that the gun was somehow manufactured by its owner, it was more likely made from a kit,” Archer told Motif.

Motif writes that Archer also said that the barrel of Doherty’s gun is metal, and not plastic, and was engraved with the caliber, which he stated no one would do with a 3D printer. Additionally, Archer said that the trigger had a safety lever that “no one would bother to include with a 3D-printed firearm” and that while the receiver is plastic, “that’s not uncommon in a commercial firearm.”

“The accessory rail is too perfect to be 3D-printed and in fact the stipling on the grip is too nice for a hobbyist 3D printer,” Archer concluded in his message to Motif. “I wish I had a pic under the rail where the serial number would be. That would probably answer the question. The kit guns have the indent where a serial number would go, but it’s blank. A 3D-printed gun would not have that.”

What do you think? Discuss this and other 3D printing topics at 3DPrintBoard.com or share your thoughts below.