Over the last several months, some of the more inspiring stories around 3D printing have had to do with the printing of prosthetic devices, particularly hands. From war torn Sudan, where 3D printing is making the lives of hundreds of injured children and young adults easier, to people here in the United States, who are saving significant amounts of money by 3D printing their own prosthetics, these stories certainly are eye openers.

Today 3DUniverse did a story about a man named Jose Delgado Jr.  Jose was born without a left hand, and in his 53 years on this planet has had first hand experience with the various prosthetic devices available to him. For over a year Jose had been using a $42,000 myoelectric prosthetic device, which took signals from the muscle fibers in his forearm, translated those signal, and then used them to mechanically move the fingers of the prosthetic, which looks pretty close to an actual hand. Luckily his insurance covered the cost of the device, unlike many individual’s who are less fortunate.

Jeremy Simon of 3DUniverse.org decided to meet up with Jose, and print him out a Cyborg Beast prosthetic hand. These are the open source 3D printed hands you may have heard about being used in the Robohand project.  They have “enabled” over 200 people worldwide, and are very versatile, easy to use, and perhaps most importantly, very affordable. At $50 for materials, you could print out 840 of these before you spent as much money as Jose’s myoelectric hand costs. 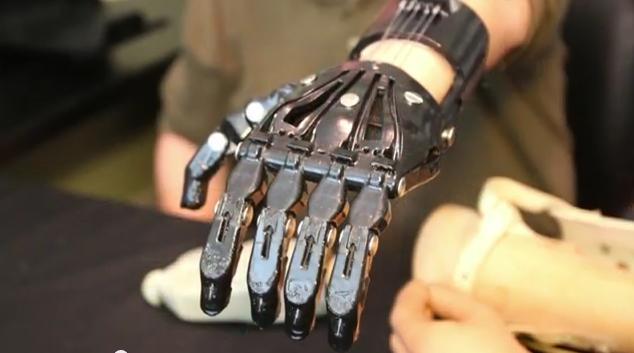 Simon went into the meeting skeptical of how the 3D printed hand would stack up to a device which costs 840 times that of the Cyborg Beast, but carried on anyhow. After all, Delgado had a job which required quite a bit of lifting and other activity. The hand he used would have to hold up to the daily pounding it would face. A $42,000 prosthetic may be able to do that, but would a $50 3D printed hand made from ABS plastic have even the slightest chance?

After some time had passed, Simon decided to meet up with Delgado once more, this time to work on the setup of the tendons within the Beast. To his amazement, Delgado had told him that the 3D printed hand has been functioning better than the myoelectric device, and he had preferred it to the $42,000 hand he had used for over a year. Sure, a piece may break every once in a while, as ABS plastic is not the strongest material in the world, but the solution is simple, print a replacement.

Simon is currently working with Delgado to print him a new hand; this time from a stronger material called Bridge nylon, which will give Delgado an even more robust hand. Join in on the discussion about Delgado’s experiences at 3DPB.com.  If you are looking to have a prosthetic 3D printed for yourself or a friend, feel free to post a request in the ‘Need a Prosthetic 3D Printed’ discussion thread.  Also, check out the video posted by Simon, in which Delgado compares his $50 Cyborg Beast with his $42,000 myoelectric hand.