The Benefits and Limitations of 3D Printing Chocolate

Whenever we say chocolate, we immediately start wanting to eat some. Chocolate has been around for quite a long time, in fact, it is said it has been around since 350 B.C. as cacao beverages or chocolate drinks. And when we thought that the chocolate industry reached its peak, the 3D printing era made sure to take chocolate to a whole new level.

Additive manufacturing has reached many food markets so it is no surprise that 3D printing made its impact on the chocolate industry. Companies such as Hershey, Nestlé, Mars Inc., and Mondelez International had been experimenting with 3D printed chocolate for the last few years, and 3D printing brings creativeness and innovation to the industry.

It is clear that taste is not enough to attract chocolatiers, and that design is now becoming an important aspect in the industry. In order to seduce customers, 3D models can be turned into an edible chocolate creations.

So, how does it work? Why is it harder to print? It is easier to print plastic than to print chocolate. Chocolate has very different melting and cooling properties than plastic, thus melted chocolate can’t harden as fast. This could lead to 3D printed chocolate losing its shape due to the temperature and gravity. The type of chocolate is also important. Whether it’s milk, dark or white chocolate, they all have different viscosities, for it is recommended to use a high-quality and machine-tempered chocolate like Belgian dark chocolate. If not then one has to temper the chocolate on the device. In some cases people have added significant amounts of pectin to try to make 3D printing easier as well. Since chocolate can’t be rolled into a hard filament because the texture is too soft, the melted chocolate is stored in a cartridge and extruded with a syringe. Belgian chocolate has mostly shown better printing results compared to other types of chocolate since it has higher levels of cocoa solids.

What are the limitations of 3D printing chocolate? 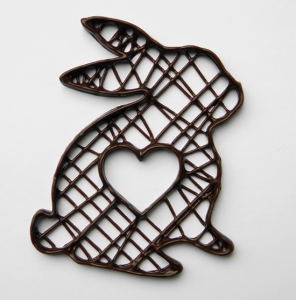 And the main benefits? Apart from being chocolate and us being able to eat it, chocolate 3D printers let us customize shapes and forms perhaps making individual bonbons or topical sweets for events. 3D printing, in general, is already about ultra-personalization. Anyone can enjoy complex 3D designs that would be impossible to do it with our own hands. Sculpting and molding is a bit limited and chocolate 3D printers help us expand our ideas.

It is always recommended to use models that aren’t too large, that have areas of fine detail, or unsupported overhand or angles that are too steep. In the said case, the model will have to be edited. To print complex models, reduce the printing speed so the chocolate has more time to dry and harden and the next layer can be built.

The chocolate industry has yet to expand in the world of 3D printing. The temperature, time, and process are the three main issues that must be solved in order to make the production more efficient. In the meantime, we can still enjoy chocolate with traditional or new and 3D printed designs. Maybe it’s time I get myself a chocolate 3D printer!