While there are those who have used 3D printing to make their own watch cases, watch bands, and watch chargers, others have taken the next step and actually made 3D printed watches, from kid-friendly to sophisticated, wooden to gold and plastic, and even timepieces that can tell you if you’ve had a little too much to drink. For years, I rocked the same black, Velcro, digital sports wristwatch every single day. Looking back at old photos, it was definitely functional, but not at all attractive. My friends joked that they would have to pry it off my wrist on my wedding day…which they did not, I might add. I decided on my own that a watch with a Velcro band and light-up screen didn’t really say ‘elegant winter wedding.’

But a new 3D printed watch that’s the result of a collaboration between French special metals distributor STAINLESS and watchmaking company UTINAM Besançon might be the perfect accessory for a fancy event.

“…we worked in 2018 with a well-known French watchmaker, Mr Philippe LEBRU (who built giant clocks in France, Switzerland and Japan) to build the first watch developed for metallic additive manufacturing,” Jean-Baptiste Sepulchre, the Marketing and Communication Officer for STAINLESS, told 3DPrint.com. “This project is our way to celebrate our 90th birthday, STAINLESS having been created in 1928.” 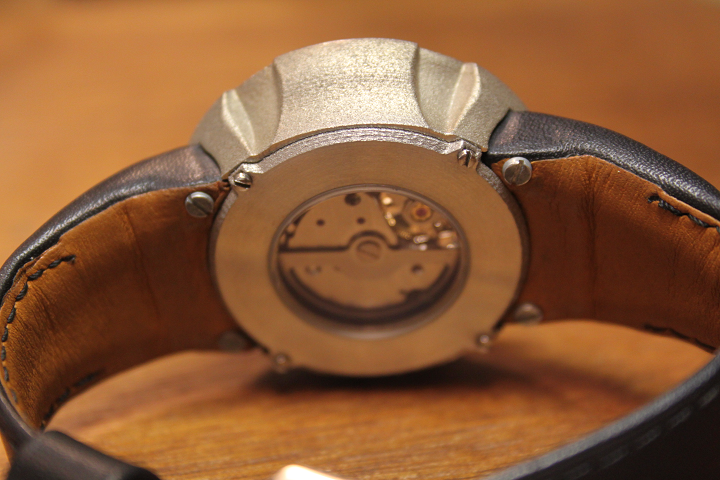 The timepiece, conceived of and assembled at French watchmaking capital Besançon, is said to be the first automatic, mechanical 3D printed watch made in France. The two project partners are both well-known for their technical expertise and reliability: UTINAM Besançon was founded by monumental clock and original watch creator Lebru, as mentioned above, and STAINLESS distributes special metals to demanding industries, like aerospace and medical. The two companies were committed to having as many of the watch components as possible manufactured within the boundaries of Franche-Comté, a traditional province in eastern France; one of the only exceptions was the Japanese timing mechanism. A 100-year-old factory in Morteau made the watch hands, and a craftsman from Besançon created the hand-sewn, genuine leather bracelet.

The watch case was entirely 3D printed, using laser melting technology, out of stainless steel 316L powder on a Renishaw AM250. Apprentices from the Besançon training center at the UIMM “Creativ Lab” 3D printed the case.

The project came about from a STAINLESS initiative to showcase its values in honor of its 90 years in business. To do so, STAINLESS wanted to complete a project that was regional, innovative, and historic, and reached out to Lebru with a proposition to combine their separate expertise on a collaborative piece.

The collaboration itself can be considered something of an innovation, given that both participants focus on very different end products: Lebru and UTINAM Besançon designs and manufactures original watches and clocks, while STAINLESS supplies raw metal materials, including metallic powder for 3D printing.

But because both of the companies were open-minded, they were able to get past the typical relationship between customers and suppliers and transcend to one based on, as STAINLESS put it in a press release, “mutual confidence and trust,” which resulted in a lovely, 3D printed metal watch.

At last month’s MICRONORA Exhibition in Besançon, STAINLESS displayed the 3D printed watch at its stand. Starting at the end of the year, it will be on sale at the UTINAM Besancon boutique, which is opposite the Musée du Temps.

Discuss this project and other 3D printing topics at 3DPrintBoard.com or share your thoughts in the comments below.