The global eyewear market is a $180 billion market dominated by one company Luxottica. If we look at today’s deal whereby BASF is investing $25 million in Materialise we could see this as a deal to industrialize 3D printing for many products. But, given Materialise’s lead in eyewear, is this perhaps the entire play for BASF? Maybe a chemical company wants to leapfrog polymer, manufacturing, parts production and eyewear manufacturers to sell mass customized eyewear? A crazy idea perhaps but if you make the constituent chemicals, maybe in some markets you can leapfrog everyone to lead in one product, and a very high margin one at that. We’ve seen moves indicating that polymer companies are looking at manufacturing parts with 3D printing, skipping a few steps in the value chain. Is this the case here with BASF and Materialise?

For as long as people have had eyes, we have needed to find ways to correct our vision, whether through blocking out bright sun or creating magnification and focusing aids. It hasn’t always been as easy as going to the local Lenscrafters or Sunglass Hut and browsing through their selection, however. The ancient Inca developed a device using walrus tusks with a slit cut into them that could be strapped onto the face to help shade their eyes from the suns rays, while Nero looked through a piece of polished emerald to reduce the glare so he could comfortably witness gladiator fights. Until the 13th century, the best one could hope for in terms of aid with blurry vision was to look at fine print through a bowl filled with water. 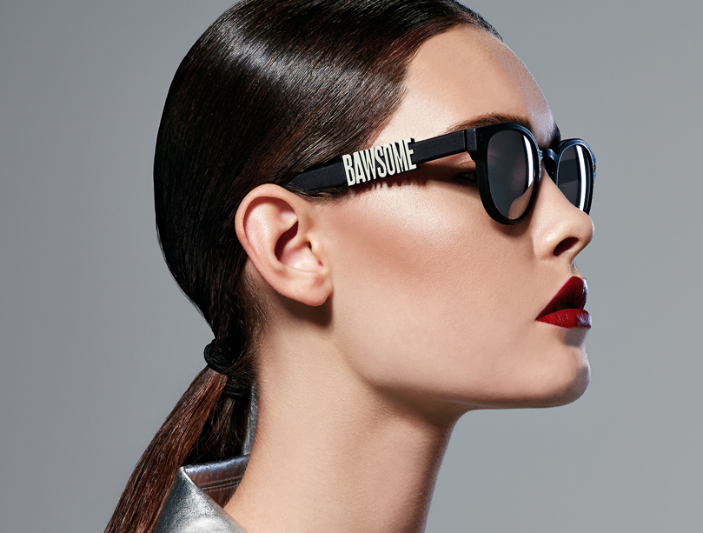 From the 13th century on, the idea of eyeglasses became increasingly refined. The placement of two corrective lenses, held together by a wire frame that balanced on the bridge of the nose was first recorded in art in an image painted by Tommaso da Modena that illustrated monks using pince-nez type eyewear. This was definitely an improvement over looking at books through glass bowls, but despite efforts such as tying the glasses around the wearer’s head with ribbons, they were still unwieldy and difficult to keep in place. It wasn’t until the 18th century when London optician, Edward Scarlett came up with the idea of creating two rigid temple pieces that would allow the glasses to rest both on the wearer’s nose and on the person’s ears. Since then, there have been numerous refinements in lenses and in frames, but the basic form has remained the same.

Meanwhile, the number of people using eyeglasses is steadily on the rise thanks both the increasingly common use of sunglasses and the development of fashion trends that encourage people to wear glasses even if they don’t need them for corrective purposes. Particularly for people who need to wear glasses every day, the selection of a pair of frames is very important, after all, we do wear them on our faces, and those faces are all unique. One of the latest innovations in technology to impact the design and production of eyewear has been 3D printing. With its ability to create customized products for no greater cost than would be required for those that are mass produced, combined with web-based platforms that allow customers to make changes in a variety of inputs, the opportunity for individuals to have just the glasses they want is rapidly increasing.

Materialise has been working with companies such as Bawsome, a startup created by Matt Tymowski, based on an idea he had begun playing with, in his spare time. Tymowski worked developing custom polymer solutions for manufacturing and construction companies and so was familiar with the customization possibilities that 3D printing was providing in that industry. What he wondered was how feasible it would be to apply those same opportunities to the creation of custom eyewear so that his customers could have the glasses that they want without having to search all over the globe in order to find just the right pair. He sat down with staff at Materialise and together they developed a plan for how to make his idea a reality. Materialise was ready to provide more than customer satisfaction, they made the process something feasible for a startup, as Tymowski described:

“I felt like I was using Materailise as an R&D center for my startup. When looking at difficult questions such as surface quality, Materialise was there to provide a novel solution. When I was trying to plan how to paint the frame, Materialise gave a great solution to dye the frames on-site, leaving less time I would spend on post-processing. We could not achieve this level of quality without the support and guidance provided by Materialise. I appreciate that they were not only executing what I had to say, but really contributing to the conversation and offering ideas from their vast experience.” The shift from traditional manufacturing to 3D printing is something that Materialise has seen before when they shepherded the creation of 3D printed in-ear hearing aids that went from 20% to 100% of the market in just two years. This same approach is driving their interaction with eyewear designers, such as Yuniku, a 3D-tailored eyewear company that uses facial scan technology to create the perfect set of eyeglasses for each facial configuration. Working with the experts at Materialise, the company was able to develop a software that allows each face to be fitted to its perfect configuration for the lenses prescribed.

Working with Aoyama, Materialise helped this company to stay on the cutting edge of eyeglass trends. Styles change quickly and glasses can quickly become dated looking, leaving a company with a great deal of stock and the task of retooling their production to new designs. Using 3D printing as the method of choice for manufacturing eyeglasses has allowed companies like Aoyama to stay nimble, responding to changes in style and market demand much more quickly than ever before. Aoyama’s CEO Philippe Beuscart explained how the expertise and technology brought by Materialise has advanced their company’s goals:

“The We DDD collection is designed for the tech-savvy, fashion-oriented consumer of today: aware of what they want and the high quality they deserve. Standardized production and a one-size-fits-all approach are no longer enough. We offer customizable options that speak directly to an individual’s tastes and preferences. Aoyama’s goal with this collection was to bring true mass customization to a luxury consumer-grade product. For us, Additive Manufacturing means the ability to go from design to market with incredible speed. No more wasted opportunity: this gives us a chance at true market responsiveness. Besides, no more wasted stock, now that we can manufacture on demand.” The Seiko brand is built around the promise of high-performance eyewear, to that end, they collaborated with Materialise and Hoet Design Studio. For the XChanger collection, it was determined at laser sintering was the best way to achieve the precision in printing that would be required of the eyewear line. A key part of this process was being able to understand variations in individual machines and achieve a uniformity of production precision that would allow the prints to be equally high quality across production. Materialise manufactures all of the four frame components in a choice of nine colors that comprise the XChanger collection, in addition to post-production processes that protect the frames from the elements, prevent wear and tear, and ensure the best possible performance over time. Alireza Parandian, Materialise, who facilitated the co-creation between Materialise and SEIKO, described the high level of attention to detail that pervades their manufacturing and research activities no matter what the end product:

“SEIKO’s focus on precision is a perfect fit for Materialise: we announced earlier this year that we had have achieved certifications for the manufacturing of end-use parts, suitable for the aeronautics and aerospace industries. And now we’re taking the same degree of precision and high quality to our Additive Manufacturing for eyewear.”

Materialise has its fingers in a lot of pies, and its products on a lot of eyes as it sets itself up to be an industry leader in the creation of custom eyewear solutions that benefit companies and customers alike. Is this enough for BASF to invest in them? A $180 billion is a mighty prize for BASF. We see Materialise as a software and production company maybe by just focusing on eyewear it can be much more valuable indeed?

Update: A Materialise spokesman told us that, “We will identify new business opportunities in various markets are not targeting one specific industry. That said, the eyewear industry is a good example of where the development of new materials can help to increase the adoption of 3D printing as a complementary manufacturing technology.”