At last week’s RAPID + TCT in Fort Worth, Texas, 3DPrint.com was on the show floor checking out the latest innovations and new 3D printer releases, as well as attending press conferences and multiple fascinating keynotes.

While there, I had the chance to visit many booths, including those of two companies based in my home state of Ohio – Fabrisonic, located in Columbus, and MakerGear, which is headquartered near Cleveland.

Fabrisonic has a hybrid 3D printing process, where 3D printing (additive) is combined with CNC milling (subtractive) in the same machine. An object is built up using 3D printing, and then smoothed down by milling to the required size and surface. The company’s Ultrasonic Additive Manufacturing (UAM) process uses ultrasonic sound waves to merge layers of metal foil together in a solid-state, and mounts its hybrid 3D printing process on traditional CNC equipment.

At the booth, Production Engineer Justin Wenning, who made SME’s 30 Under 30 list in 2016, told me that the company’s technology can “enable what people don’t think is possible” so they can “get exactly what they desire.” At last year’s RAPID + TCT, the company’s president and CEO Mark Norfolk told 3DPrint.com that about 30% of Fabrisonic’s business is in heat exchangers, as its patented UAM unique low-temperature metal 3D printing technology – no higher than 250°F – makes the manufacturing process smoother. I’m betting that business will go up now – the company, which participated in a two-year program at NASA, has 3D printed a new class of metal heat exchanger that passed the “rigorous testing regime” at NASA’s Jet Propulsion Laboratory (JPL).

What’s most fascinating about Fabrisonic’s technology is that it 3D prints metal parts, both big and small, without having to melt anything – no wire, no powder, and no lasers. The company’s 6′ x 6′ x 3′ UAM 3D printer is used to “scrub” metal foil and build it up into the final net shape, and then comes in at the end to CNC whatever else is needed; a strain sensor is then used to measure loads in a “very cool process.” According to Wenning, “no else here is doing that.”

Because it can also mix and match materials, such as copper and aluminum, for a “different degree of flexibility,” UAM allows engineers and designers “to do what they’ve always dreamed.”

“We improve the state of the art,” Wenning told me.

This technology, in addition to aerospace, also has applications in dissimilar materials, embedded electronics and sensors, and other fields that require parts with complex internal geometries. It can also be used to embed other materials, such as a metal matrix composite with increased fatigue and strength properties, and Fabrisonic is also currently “putting low-weight rebar inside parts.” 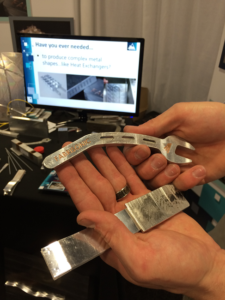 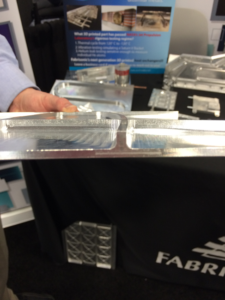 Thanks to Fabrisonic’s UAM technology, the redesigned part for NASA’s Lunar Rover is now 2.2 lbs – a weight reduction of 30%. In addition, the part had a reduced lead time, as Wenning told me that it took less than two weeks to get from CAD design to completed part, which is “very impressive.”

Wenning told me after the show, “We have the ability to leverage our technology to build some otherwise impossible parts.”

While the 3D printed Lunar Rover part is not actually flying in outer space right now, it’s got a very important job in demonstrating what UAM is capable of creating. Smaller examples of the Lunar Rover part are being used for density testing, and Fabrisonic was able to increase the PSI up to 3,000 PSI in burst testing; or, in Wenning’s words, “we killed it.”

The part was also subjected to vibration and thermal testing. Thermal shock can cause major issues when it comes to parts in space, but Fabrisonic’s technology came through again with flying colors when the part was subjected first to super cold and then super hot temperatures.

“Minds were blown,” Wenning said about JPL’s “thrilled” reaction to the test results.

To see Fabrisonic’s unique UAM process in action, take a look at the company’s video below.

On the first day of RAPID, MakerGear announced its new M3 Independent (M3-ID) Dual Rev. 1 3D printer, which is an upgrade of the M3 the company introduced last year and showcased at RAPID  + TCT 2017. According to the company’s founder and CEO Rick Pollack, who built MakerGear out of his garage beginning in 2009, the M3-ID Dual Rev. 1 is “targeting very specific applications.”

I had a chance to see the M3-ID Dual Rev. 1 for myself at MakerGear’s booth last week; they were also extremely kind in letting me plug my cell phone in for some necessary charging while Pollack and I chatted.

The new dual extrusion 3D printer, which takes after its predecessors with features like WiFi, swappable high-temperature V4 hot ends, and an integrated user interface, also has a new enclosure, with an added touch probe to manage, increase, and improve bed leveling with easy instructions.

The touch probe takes multiple data points and compensates for variations in the flatness of the print bed if necessary – a “true leveling” process which Pollack says MakerGear refers to as “auto-flattening.”

The M3-ID Dual Rev. 1, according to MakerGear, is the first desktop 3D printer to use independent extruders to support duplication printing – the 3D printer’s two extruders were designed to work independently of, and simultaneously with, its Mimeo Mode, in order to double printing capacity.

Pollack told me that the big difference between MakerGear’s M3-ID Dual Rev. 1 and its reliable M2, which was introduced back in 2012, is that the company “took that experience and baked it in” for the M3, which offers more ease of use.

“Big companies are realizing that 3D printers are not just toys,” Pollack told me. 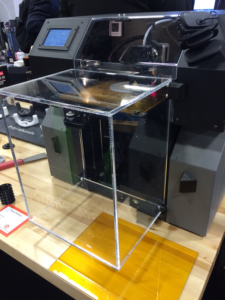 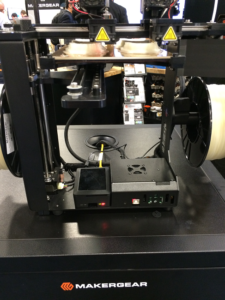 In addition to the M3-ID Dual Rev. 1, which prints with a wide range of materials, the company was also demonstrating its new MakerGear Cloud software at RAPID. The fully integrated machine and data management solution provides efficient operation for both low- and high-volume print jobs, and adapts to each user’s devices, locations, and security needs.

Once business was out of the way and I had removed my phone from the charger, Pollack can surely attest to the fact that I geeked out a little over the 3D printed warp core that was on display at MakerGear’s booth from the Lorain County Community College (LCCC) Fab Lab, as well as the 3D printed bling the company makes for popular AHL mascot and STEM education advocate Ringo the Ringtail, both of which I mentioned in my RAPID rundown last week.