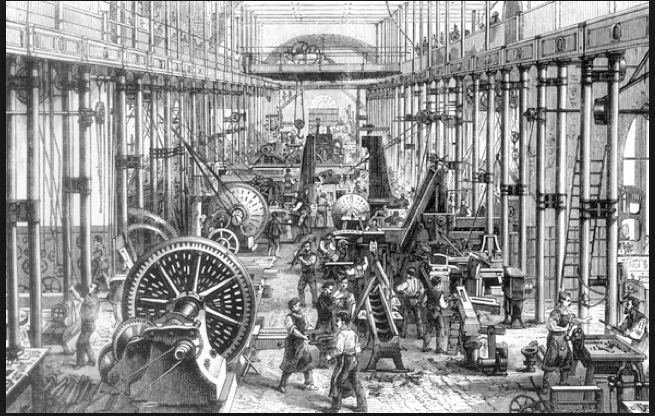 Before the rise of mass industry, the urban centers were desirable locations for shop keeps and wealthy citizens who could afford to be, and greatly desired to be, near the cultural life of the city. In the 19th century, with the industrial revolution and the introduction of train travel, those who could moved farther away from the city centers where smoke belching factories poisoned the atmosphere, and only those who could not afford to do otherwise tolerated them as their next door neighbors. Since this time there has been a touchy relationship between industry and human habitation, with a slew of zoning regulations designed to keep the physical presence of manufacturing out from under the noses of those who can afford to impact the development of these kinds of laws.

Even while the terms ‘manufacturing’ and ‘industry’ have become negative buzzwords, very few mainstream individuals wish to eschew the great benefits that are possible as a result of this industrialization. Power plants, refuse disposal, and access to inexpensive goods are all modern necessities. The revolution in manufacturing caused by the development of advanced technologies such as 3D printing, however, is beginning to put a positive spin on the dirty word ‘industrial.’ The good press coming in as a result is in turn beginning to transform the way people perceive industry could be.

In Copenhagen, city planners have begun to see what it could be like to view the previously shameful secrets of industrial society as elements to be integrated into the fabric of urban life, rather than stains to be hidden. The waterfront in Copenhagen is home to the Amager island power station and construction is underway on an incineration plant as well. But if you’ve pictured the throwback images to smokestacks, black soot, and gray/orange skies, you’re thinking too far in the past. Instead, Amager Bakke will feature a climbing wall, a grass roof for picnics, and an artificial ski slope. It will be a place that works to bring the public in rather than one that has to be carefully fenced off and sequestered.

This type of facility is more than just a makeover; it requires a shift in the public perception of the dangers associated with these types of activities. That change is supported by the generally positive reactions people have toward the idea of clean manufacturing and it is in this way that 3D printing is playing a major role as poster child. The architects from the firm Bjarke Ingels Group hope that this has created the kind of environment that changes public perceptions of what public utilities should be and how they should look. Philipp Rode, Executive Director of the London School of Economics’ Cities Programme, admires the idea but is not uncritically enthusiastic about what it means: And, of course, 3D printing isn’t just changing the way people perceive manufacturing, it is actually changing the nature of manufacturing itself. One of the differences brought about is that things can be produced in a much more efficient way and with much smaller machinery. This means that plants utilizing this technology require smaller spaces in order to produce the same amount and do so without some of the more dangerous chemical pollutants. This combination of sleeker and cleaner makes advanced manufacturing sites better neighbors and easier to integrate into the urban fabric.

This could have far reaching physical, social, and environmental impacts both on manufacturing and on the cities with which it has or will have relationships. As we’ve continued to see with 3D printing, the mantra seems to be not ‘go big, or go home’ but rather ‘go everywhere, and then some.’ Discuss in the Industry Image forum at 3DPB.com.