Another day, another massive change to the scrappy little 3D printing startup that kicked off the entire modern desktop 3D printing phenomenon. Since MakerBot Industries launched back in 2009, a point of pride for them was their New York facility where all of their 3D printers were designed and manufactured. It helped them keep connected to their early, makerspace roots, and seemed to be part of the identity of the company as a leader in the hobby/desktop 3D printer market. But ever since they were purchased by Stratasys in 2013, they have moved about as far away from the hobby/desktop market as a hobby/desktop 3D printer can move, focusing instead on education and small businesses.

While both of those areas are probably more lucrative, it hasn’t done much for the company’s profitability, which has remained a drag on Stratasys’ stock prices, and has led to several rounds of layoffs over the last year. And it looks like there are even more layoffs in the future for MakerBot Industries, who just announced that going forward they will no longer be assembling MakerBot 3D printers at their factory in New York City. Instead, they have signed a deal with global contract manufacturer Jabil, who will take over all manufacturing and assembly of the MakerBot family of 3D printers. While Jabil is headquartered in the US, they have production facilities all over the world. MakerBot did not make it clear if production would also be moved overseas. MakerBot CEO Jonathan Jaglom cites the predicted growth of the 3D printing industry and his company’s need to position itself in a rapidly changing market. Certainly production and manufacturing flexibility has played a role in this choice, which couldn’t have been an easy one to make. But being able to quickly scale up or down production seems to be a necessity in a market that doesn’t seem to be willing to deal with long lead times anymore. Working with a company like Jabil allows MakerBot to produce 3D printers faster, and keep costs down during periods when they may need less stock, something that isn’t possible with the fixed costs of a dedicated production facility.

“We will transition production from our factory to Jabil over the coming months, which means that we will have to part with some of our talented and hard working colleagues at our factory. I value the commitment and contributions of every single one of them and we will support them as much as possible to find new employment. Taking this step was a very difficult decision, but I believe that it is the right path forward for MakerBot. We will retain key personnel from the factory in-house in the areas of logistics, repair, planning, quality, and operations,” Jaglom wrote on MakerBot’s blog, where the change was announced today. 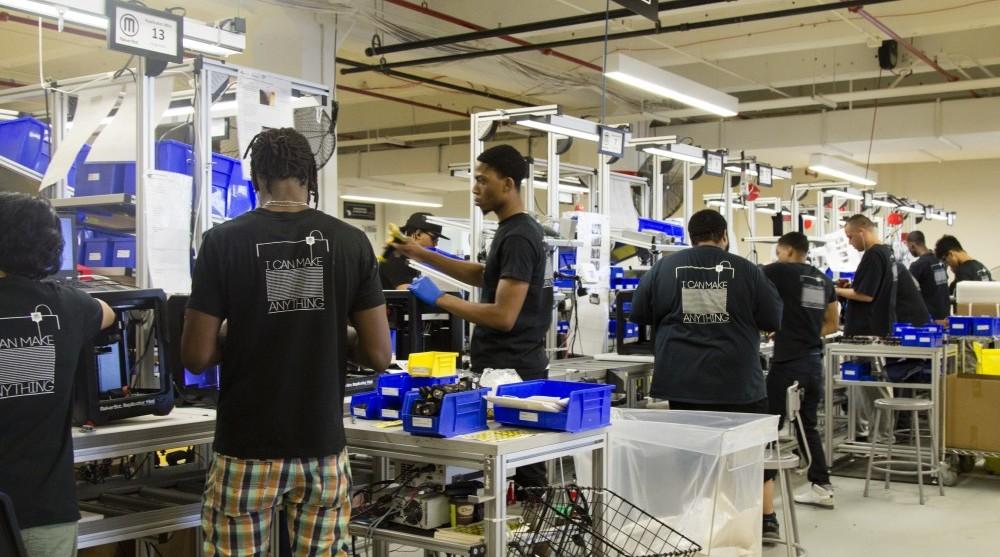 The floor of the MakerBot Factory in New York City.

While this is probably a wise business move, it is still both unfortunate and disappointing. However since they were acquired by Stratasys, it was inevitable that eventually MakerBot would join their parent company using a similar production model, however I’ve been told that this was an in house choice made by MakerBot leadership, not one forced upon them by Stratasys. While MakerBot has been working with a contract manufacturer for their fourth-generation product line since their October restructuring, at the time they did not say whether or not this was Jabil. After working with a third party manufacturing facility, MakerBot decided that having a production facility in New York was probably not in the company’s best interest. Unfortunately, removing assembly from a dedicated production facility may lead to assembly or quality control issues, not that they weren’t already having those, so it remains to be seen if this move will help them or end up hurting them in the long run. MakerBot told us that this move is actually intended to improve product and assembly quality, and to be fair to Jabil, they are a leader in tech assembly, with a long list of clients and a solid reputation.

Certainly MakerBot will need to maintain some sort of production facility near their company headquarters in New York, primarily for prototyping, factory repairs and quality control monitoring. However there has been no word on what shape that will take or how many of the staff will ultimately be let go. Jaglom has indicated that the the operations team will be working closely with Jabil to help with the transition, but he did not provide a specific time frame for how long that is expected to take. How do you see this boding for the future of MakerBot? Discuss in the MakerBot Outsourcing forum over at 3DPB.com.