The news has been full of stories about new advancements in 3D printed tissue. Companies such as Organovo and research institutions such as the University of California San Diego are leading the charge in the development of 3D printed, functional human tissue, particularly liver tissue. So far, printed tissue is being used mostly for pharmaceutical drug testing, but everyone in the 3D printing biosphere professes the ultimate goal of eventually producing whole, fully functional human organs that can be transplanted into patients. Most experts agree that it will happen; it’s just a matter of when.

It’s also a matter of who. The race to be the first to 3D print a transplantable human organ is an intense one, and Wake Forest Baptist Medical Center may have just pulled into the lead. Regenerative medicine researchers at the North Carolina hospital have announced that they have printed ear, bone and muscle structures and successfully implanted them into animals. The structures, after being implanted, matured into functional tissue and sprouted new systems of blood vessels, and their strength and size mean that they could feasibly be implanted into humans in the future. “We make ears the size of baby ears. We make jawbones the size of human jawbones,” said Anthony Atala, M.D., director of the Wake Forest Institute for Regenerative Medicine (WFIRM). “We are printing all kinds of things.”

Dr. Atala has long been a major player in the field of regenerative medicine. In 2006 his lab made history by growing and implanting a bladder into a human patient – the first time such a feat had ever been accomplished. He and his team have been developing the Integrated Tissue and Organ Printing System (ITOP) over the past decade. The system involves a custom-designed 3D printer that utilzes a water-based ink optimized to promote the health and growth of encapsulated cells, which are printed in alternating layers with biodegradable plastic micro-channels that act as passages for nutrients. Unlike other bioprinting methods, ITOP prints the cells and the scaffolds simultaneously, according to Dr. Atala. 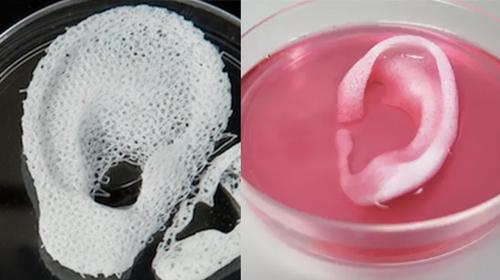 “This novel tissue and organ printer is an important advance in our quest to make replacement tissue for patients,” he said. “It can fabricate stable, human-scale tissue of any shape. With further development, this technology could potentially be used to print living tissue and organ structures for surgical implantation.” Wake Forest’s research has been largely funded by the Armed Forces Institute of Regenerative Medicine, a military organization working to develop regenerative treatments for severely injured soldiers. The development of transplantable, 3D printed tissue could obviously benefit both military personnel and civilians, though – according to the United Network for Organ Sharing, over 121,000 Americans are currently on the waiting list for an organ transplant. The ITOP system could eliminate waiting lists altogether with “made to order” organs custom-designed for individual patients based on MRI and CT scans.

We’re still years away from that, but it’s been five months since 3D printed bone fragments were implanted into rats, and the tissue is still thriving inside the rodents’ bodies. One of the biggest challenges in bioprinting so far has been getting printed tissue to survive long enough to form blood vessels and nerves and otherwise fully integrate with the body in which it is implanted, so this study is incredibly promising. You can access the study here. Discuss these new advances in the 3D Printed Tissue forum over at 3DPB.com.