I consider myself a tech-optimist. I truly believe that anything is possible with the right technology and science to back it. I envision a future, perhaps even in my lifetime (I’m 33) where nearly every disease and illness will be curable, while poverty, pollution and aging can be all but eliminated. At the same time I also believe that technological progress will throw many challenges and obstacles at us as a global society. There are bad apples everywhere, and the same technology which could solve many of our problems may also be used by outsiders to cause immense harm.

Ultimately 3D printing could be one of these technologies, with impacts on society which will touch us all for the better, while also enabling new avenues for evil in this world to prevail. Below are a handful of ways that such technology could be used against us, and areas which governments and law enforcement agencies should be prepared for moving into in the next decade: The most obvious of these dangers is the ability for anyone, anywhere, to eventually have the means of fabricating a weapon such as a firearm. At this point it’s easier and safer for someone with criminal intentions to find other means of obtaining a weapon illegally; however, as the technology progresses, and new composite materials are brought to market over the next 6-7 years, the problems will only mount. Whether you are for or against the right to bear arms, there are few individuals who likely believe everyone on the planet should have this right. But when a simple file can be downloaded and a gun fabricated within hours, such weapons will be cheaply available to nearly everyone. While the majority of guns we’ve seen printed are fabricated with ABS thermoplastic and thus hold up for only a few shots at best, the technology is progressing rapidly. Earlier this year, Defense Distributed’s Cody Wilson tried to get his hands on a printer called the Mark One, capable of printing objects using strands of carbon fiber, fiberglass and even Kevlar. Although MarkForged, the company that produces the machine, refused to process his order, Wilson offered a $15,000 bounty (the printer sells for $5,499) to anyone who could get him one. The Mark One is just a single example of a relatively affordable machine capable of producing components or entire weapons from materials which are undetectable as well as incredibly strong.

Two years ago a company called Solid Concepts 3D printed a classic 1911 metal gun, which was pretty much the same as any firearm one would purchase from a gun supplier. With that said, they had to use a high-tech laser sintering process, via a machine which costs well over half a million dollars, to print it out. With numerous companies working on affordable metal printers, there is little doubt that machines with such capabilities will be available for under $20,000 within the next 5-10 years. Once this occurs, 3D printed firearms, which are virtually indistinguishable from those used by licensed gun owners, could be printed and assembled in the home of a felon within just hours. At least these metal firearms will be detectable.

As new printable materials are released, many which are just as strong as some metals but without the physical properties that allow for common detection, not only will firearms be a risk, but so too will knives and other weapons. These weapons could very easily make their way into sensitive areas or onboard airliners without detection. While there is not a whole lot that law enforcement can do to enforce an all-out ban on sharing files and schematics for these weapons, it’s very likely that numerous new laws will be written to deal with these threats. 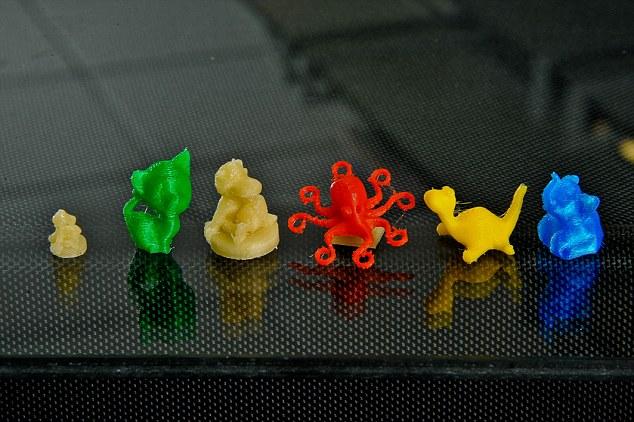 While we are not quite there yet, numerous bodies of research have begun 3D printing drugs in various forms. Likely still a decade or more away from readily available drug printers, eventually such machines will be a worry. Synthesizing various chemicals is not easy; however, new forms of drug delivery could be enabled via 3D printers sooner rather than later. Researchers have already used a sub-$2,500 MakerBot 3D printer to fabricate medical implants capable of drug release within the human body. By creating non-toxic filament that’s mixed with certain chemicals, they were able to fabricate tiny implants which could be placed into the human body for a slow and steady release of specific drugs.

The same philosophy could be used by illegal drug manufacturers to print out pills in all different shapes, sizes and colors, catering to children or adults. Not only would this possibly make illegal drugs more appealing to younger individuals, but the entire process of creating such pills could be automated and streamlined.

The Fall of Intellectual Property (IP)

While there hasn’t been a tremendous number of IP issues involving 3D printing quite yet, this does’t mean it won’t become a major problem sometime in the near future. As more and more companies begin selling 3D models of their products online, an entire underground market for these files will certainly emerge. Billions of dollars will be lost due to file sharing, similarly to the way that the music industry suffered losses when sites like Napster came online.

The music industry did not die. Instead it evolved, as new business models such as iTunes took off. By offering design files at prices which don’t put a dent in the pocketbook, companies could drastically reduce the urge that consumers will have to run off and illegally download product designs and schematics. If we have learned anything from the music industry it should be that innovative new businesses models will ultimately win out. Don’t get used to the norm, instead stay a step or two ahead of the market.

With all this said, there is no doubt that IP issues will cause substantial losses to businesses small and large over the next decade. My suggestion is that instead of paying lawyers $2 to chase down every $1 lost, spend $0.50 ahead of time to figure out now how you will prevent such future losses.

There are already platforms and software out there which can help companies manage their 3D printable files. For instance, Authentise is a startup with a mission to protect Intellectual property while still enabling the sale of 3D printable models. Their software enables the streaming of a model directly to a client’s 3D printer, never storing the file on any computer or allowing for any computer to download it. This is one of the innovative approaches to technological change that we are talking about.

We must embrace technology, as the benefits clearly outweigh the dangers. Forward thinking, and not overstepping certain boundaries will be the winning ticket for law enforcement as well as lawmakers over the next decade. Clearly laws and limitations need to be in place, but it’s when those laws and limitations are set too high that more harm can be done than good. Don’t be afraid of change, instead look to it as a means of prompting creativity and innovation in combating the dangers that the change may bring with it.

Let’s hear your thoughts on the possible dangers of 3D printing. Discuss in the 3D Printing Dangers forum thread on 3DPB.com.