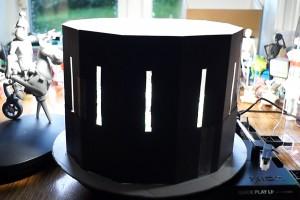 A standard zoetrope at rest

While there are historical records from China of devices similar in description dating back over 2,000 years, generally the first zoetrope was considered to have been created in the 1830s. While they work very differently, a zoetrope is a precursor to modern animation and uses the same fundamental concept to create the illusion of movement. The device consists of a cylinder or a barrel with a series of vertical slits cut along its sides. Inside of the cylinder is a series of sequenced images that are viewed through the slits. The slits subconsciously interrupt the images, preventing them from blurring together, simulating the movement of the images.

A more modern version of the classic zoetrope is the 3D zoetrope, which replaces the sequential images with 3D models and the cylinder with a flashing strobe light. This method creates a much smoother flow of images and removes the halting, jerking motion of the original design. 3D zoetropes have been created by companies as diverse as Studio Ghibli starring characters from their classic film My Neighbor Totoro, and Pixar, which animated characters from their first film, Toy Story. It was the latter 3D zoetrope that inspired 3D artist and animator Matt Bagshaw to team up with electrical engineer Chris Riddell to create their own smaller-scale version using a 3D character from Bagshaw’s portfolio named St. George. Pixar’s Toy Story 3D Zoetrope is over six feet wide, so Bagshaw and Riddell needed to scale their design down quite a bit. They started by turning St. George into a 3D printable model, which was rather easy considering Bagshaw had already 3D modeled him in motion for an animation test. By removing every other frame of his walk cycle, Bagshaw ended up with 12 individual frames that would result in about one second of animation. Bagshaw made each of the 12 frames’ geometry watertight with Dynamesh and ZRemesher in Zbrush and then converted each frame into a single 3D printable model. Once he had his models ready, he had them 3D printed by Shapeways, with each figure being about 2.75 inches tall. The final zoetrope turntable without the cylinder

“While the plan is to ultimately have a strobe illuminate the frames I thought I’d try it out with a traditional Zoetrope setup, so I made a cardboard base and cylinder and placed it on a record turntable. The player in the film is running at 78rpm so is very slightly faster than the animation was intended but it still works pretty well. Unfortunately the video doesn’t do justice to the real thing, but you can see all the frames on the stop motion movie of the models that I made,” Bagshaw explained.

You can see a video of Bagshaw and Riddell’s zoetrope in action here:

And here is a stop motion animation test of the 12 individual 3D models of St. George:

Bagshaw and Riddell’s St. George zoetrope is still a work in progress, but the pair have some great enhancements planned which will allow anyone to create their own 3D printed zoetropes.

Bagshaw is currently designing a 3D printable modular frame that will consist of a 12 spoked wheel and supporting framework that includes spaces for cards that will serve as the slotted walls. Each spoke will have numbered plugs that fit the base of each of the models needed to complete the sequence, and the entire frame can be attached to any old record player. Bagshaw will also create several different characters that can be easily swapped out using the plugs on the figures’ base. So anyone with a 3D printer can either create a zoetrope using Bagshaw’s figures, or they can design their own series of figures and customize it with any characters that they wish. Riddell is also perfecting the strobe lights that will be used with the final version. A strobe light will highlight the frames and provide a clearer view of the scene, whereas the classic zoetrope design only lets you see half the figures in action.

Their projects will only continue to impress us as we look at 3D printed zoetropes from incredible designers. Let us know what you think of this project, and what types of character you would design for it, on our 3D Printed Zoetrope Project forum at 3DPB.com.