Over the last six months alone, we have seen several companies and creative individuals introduce methods to 3D print large structures such as homes. Although there are no major commercial applications of such technology yet, within the next few years it’s bound to happen. Architects in Amsterdam are currently constructing a home by 3D printing large plastic blocks, while a company in China has been printing entire walls of homes out of a concrete material, and then constructing them wall by wall. In addition, there have been several attempts to build large scale machines capable of printing the entire structure of a home on site. All these methods, if they continue to develop, may lead to a safe, cheap, and reliable new way to construct homes.  At the same time though, they all have their flaws.

Several researchers including, Jenny Sabin, Martin Miller, Nicholas Cassab, and Andrew Lucia, of Sabin Design Lab, Cornell University and Jenny Sabin Studio, have published an article in the peer-reviewed journal, ‘3D Printing and Additive Manufacturing (3DP)‘ with what they believe is a more efficient and easy method for large scale construction, via additive manufacturing. The method described, makes use of interlocking 3D printed ceramic bricks, that they refer to as PolyBricks.

The method used by the researchers, is quite unique and geometrically sophisticated. Currently when constructing a home from concrete, the typical approach includes cinder blocks, a mortar or bonding material, and a heck of a lot of labor. On the other hand, the typical approach many have considered for 3D printing a home, would equate to a lot of heavy lifting, the availability of an enormous 3D printer which is larger than the home it is constructing, and a whole slew of supervision over the print process. The researchers have suggested an approach which feeds off the best attributes of each method above.

What they have done is 3D print uniquely shaped Polybricks, which could be described as cinder blocks, made from a ceramic material, and shaped to fit together with the other blocks perfectly. What is even more impressive is that unlike cinder blocks, no mortar is required. Now I’m sure you all are envisioning a home in which none of the blocks making it up are held together by some sort of adhesive material. Doesn’t sound too safe, right? Wrong!

The method used by the researchers allows them to print out shapes which interlock in such a way that they are just as secure as traditional methods of construction. The report explains this in further details,

“Seeking to achieve a system that required no additional adhesives or mortar, we looked to traditional wood joinery techniques as a means of interlocking adjacent components. We developed a customized tapered dovetail in which the direction and severity of the tapering is dependent upon the local geometric orientation of each component; the tapering of the dovetail is based upon the slope of the surface being generated such that the narrow end of the tapering is always at the lower face of the generated surface. Thus, the force of gravity locks adjacent components together.”

To manufacture each Polybrick, the team used a ZCorp 510 powder based 3D printer. Because of the tremendous accuracy of each print, they are able to create complex geometric shapes within the bricks to make sure they fit together just right. The ability to use only one material, and print the bricks as needed, leads to a large scale reduction of waste, while reducing the labor needed for construction.

The team concluded that they “have effectively designed a system for 3D printing mortar-less ceramic brick assemblies at scales and in materials well beyond existing constraints of additive manufacturing technology.”

Like the other additive manufacturing methods we have covered over the last six months, a time frame for when these Polybricks will actually be utilized in a construction setting, has yet to be seen, however, such research could certainly be the beginning of a new, reliable, cheaper method of construction. What do you think? Will Polybricks have a future in construction? Let us know in the Polybrick forum thread on 3DPB.com. 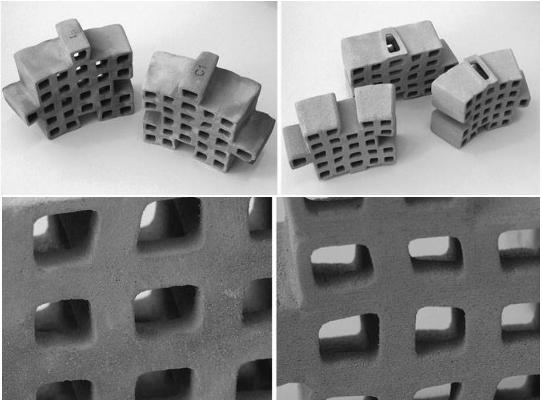