The Most Amazing 3D Printed Zoetrope Ever? ‘All Things Fall’ Just May Be!

The zoetrope, a device which many believe dates back to 100 BC is what could be considered the very start of movie production. The “modern-day” zoetrope, which was developed in 1833 by a man named William George Horner, seems to have had a rebirth lately, thanks in part to 3D printing technology. Over the past couple of years, we have seen many 3D printed zoetropes come to fruition thanks to the availability of sophisticated modeling software. This software allows for characters, figures, and whatever else is depicted within a zoetrope to easily be 3D printed, slightly manipulated and then 3D printed again, making the perfect tool for zoetrope creators.

For two artists, by the names of Sebastian Burdon and Mat Collishaw, they used 3D printing as a way to create a very impressive and extremely detailed zoetrope, that they call “All Things Fall.” We first noticed it back in December, but recently got to hear about the incredible piece from the artists. 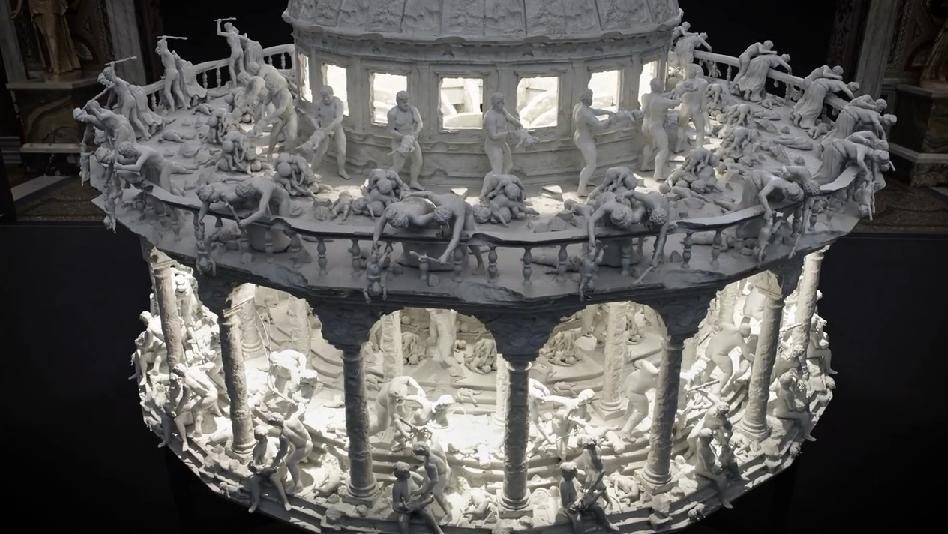 “I was commissioned to do all the 3D modeling and animations for the artwork,” Burdon, a London-based 3D Technical Director who currently runs a company called Creative Not, tells 3DPrint.com. “I took part in the design process, however Mat (Collishaw) was a driving force behind the production.” To create this unique zoetrope the team took many visual references of architecture, characters and movements and then had to add to these a completely custom flare which would allow each item to stand out from one another.

“I had to create many types of hair, body types and facial expressions,” Burdon tells us. “The characters are quite large, therefore I had to go into quite a lot of detail in terms of 3D mesh resolution. I use 3DS Max and Zbrush for creating the characters.” The ‘All Things Fall’ zoetrope is divided into 18 separate frames, which is created in a loop, meaning one could stare at the rotating animation and never witness an end. To print out all of the pieces, nine separate 3D Systems Cube Pro 3D printers were used, and it took an incredible 18 to 30 hours to print each and every figure as well as additional time to print out the hundreds of other parts. In total it took a staggering 6 months of work to create all of the 3D models and animations. In the end, it was completely worth it though.

“I am very happy with the completed piece,” Burdon explains. “I have created eight 3D zoetropes before, however ‘All Things Fall’ is by far the most complex of them all.”

Take a look at the “All Things Fall” zoetrope in action below. What do you think of this amazing creation? Discuss in the zoetrope forum thread on 3DPB.com.