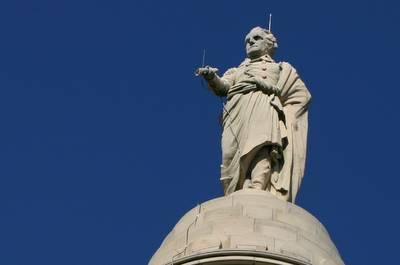 When the scaffolding went up, Michael Raphael, a native of Baltimore, requested permission from the Mount Vernon Place Conservancy to produce a 3D scan of the statue of George Washington that tops the monument. Raphael is the owner of Direct Dimensions, Inc., a company that specializes in on-site 3D scanning and the conversion of 3D data into computer models. The scan would document the current state of the statue.

In the course of the renovation, two time capsules have been discovered. The first was sealed in a copper box and placed behind a plaque during a centennial celebration in 1915. The second was from the original construction and was discovered when the cornerstone of the monument was revealed during the recent renovation. Inside of the granite cube that formed the cornerstone, conservationists found a 200-year-old time capsule in which had been placed three large bottles containing an image of George Washington, a copy of his farewell speech, and several old coins and newspapers. The objects were carefully removed and are under study. One of two time capsules, this one was locate in the cornerstone (photo: © Mount Vernon Place Conservancy)

Meanwhile, Raphael proposed replacing the old objects with new ones, objects that could be considered exemplary of contemporary technology but still relevant to the monument itself. And what better way to do that than to replicate the monument-topping statue of Washington? Better still, future historians who open the reinstalled time capsule will be able to compare the condition of the replica–its state in 2015–to the condition of the actual sculpture atop Baltimore’s Washington Monument.

“Being a native Baltimorean and coming through the city and seeing that scaffolding up there, it was something I felt very important about, to utilize our 3-D scanning technologies to go up, scan and capture George Washington to be able to preserve him for the future,” Raphael said. “When they unearthed the cornerstone and realized they were going to put it back and needed something to put in it, we volunteered the idea of putting in 3-D printed versions of George.”

Creating the 3D scans and subsequent prints of the statue of George Washington was a labor of love for Raphael–who did the work ($10,000 worth) pro bono. The 3D printed objects are miniature versions of the bust, the head, and the complete torso and the right hand, which holds a scroll representing Washington’s resignation as the commander-in-chief of the Continental Army following the Revolutionary War and his signing of the Treaty of Paris. Washington famously submitted his resignation in a ceremony at the Maryland Statehouse in 1783. Five years later he was elected to his first of two terms as President of the United States. Direct Dimensions’ 3D print of the hand is actually hollow as it was designed to contain a letter that explains to future historians when the cornerstone was discovered, what was originally inside of it, the condition of the statue (thanks to the 3D scan), and how the 3D prints were produced.

In essence, in this important historical monument, 3D printing takes its place as a groundbreaking technology that, while in some ways supersedes previous manufacturing methods more vulnerable to the ravages of time, also serves as an homage to them. Let us know what you think about this historical preservation in the 3D Printed Washington Monument forum thread over at 3DPB.com.