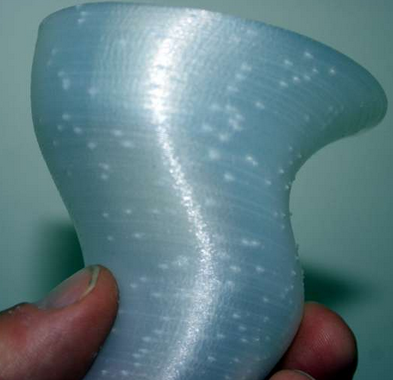 Examples of seams within a 3D print

As I have mentioned in the past, it’s my personal opinion that technologies like stereolithography (SLA) will eventually win out in the battle for the consumer 3D printing market. The main reason I believe this is because SLA technology currently is able to produce much more intricate end products, usually lacking any appearance of seams or layering. Since there is no continuous flow of material used within the SLA process, there are typically very few undesirable points where layers or seams within a particular layer noticably meet. Although built layer-by-layer, the fact that a laser or other light source is curing a liquid resin point-by-point or layer-by-layer (if using a DLP projector as a light source) means such imperfections are less apparent. This is opposed to the FDM/FFF printing processes in which layers and seams (areas where layers meet up) are much more apparent.

Stratasys, which relies heavily on their Fused Deposition Modeling (FDM) 3D printers for a large part of their business, via their Fortus and uPrint lines of machines, in addition to the machines sold by their consumer-targeted subsidiary MakerBot, realizes the importance of the continued success of FDM technology within the market. Clearly they have been working on methods to improve the output of such printing methods. This week the company was awarded patent number 8,974,715 B2 for a method to conceal seams within an FDM printed object. Assigned to Stratasys Inc., and invented by Paul E. Hopkins and Donald J. Holzwarth, the process seems to be quite an interesting approach to eliminate some of the less than desirable elements of the FDM printing process. The main purpose of the invention is summarized by the following passage within the filing:

“A method for building a 3D model with an extrusion-based digital manufacturing system. The method includes generating a contour tool path that defines an interior region of a layer of the 3D model, where the contour tool path comprises a start point and a stop point, and where at least one of the start point and the stop point is located within the interior region of the layer.”

Although the terminology and diagrams provided within the filing are rather complicated and difficult to follow, the main ideas behind these methods are rather simple. By using a technique to print two different exterior layers of a model (one on the outer edge and one on the inner edge) which overlap within the interior of the object, seams where a particular layer typically would meet are eliminated, leaving a much smoother layer within an object.  The patent covers a process of adjusting start and/or stop points of the contour tool paths of a layer so that they fall within the interior boundaries of the printed object

Although this patent does not cover a process to reduce actual layering, the techniques used here will at least reduce the bulging and porosity often seen where a start and stop point of a single layer meet up, shifting all such convergence areas into the printed object itself, rather than on its exterior.

It will be interesting to see if Stratasys implements such a process within their software or somehow they hard wire it into the machines themselves. Now all they need to figure out is how to reduce or eliminate layering.

Let’s hear your thoughts on this patent in the Stratasys Seam Concealing Patent forum thread on 3DPB.com.