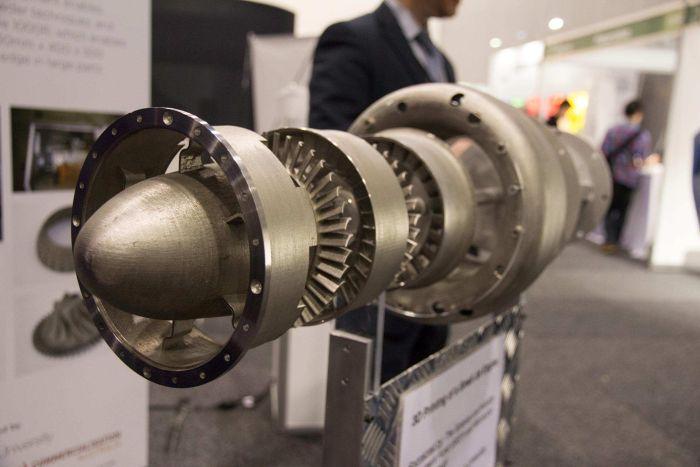 It’s only a matter of time before we begin seeing just about every man-made object on this planet 3D printed in some form or another. We’ve already seen houses, cars, and electronic devices fabricated on 3D printers. Now, you can check yet another item off of that list. Researchers at Monash University, in Melbourne, Australia have teamed with individuals from Deakin University and CSIRO to 3D print two proof of concept jet engines. One is currently on display at the International Air Show in Avalon, Victoria, Australia, and the other is housed at Microtubo (Safran), a French aerospace company. The engine design, which is based on an auxiliary powered gas turbine engine, provided to the Univeristy by Microturbo (Safran), is similar to one which would have been used in a Falcon 20 aircraft.

“It was our chance to prove what we could do,” says Professor Xinhua Wu, director of the Monash Centre for Additive Manufacturing. “But when we reviewed the plans we realised that the engine had evolved over years of manufacture. So we took the engine to pieces and scanned the components. Then we printed two copies.”

The government supported project could lead to much innovation in engine design. Already many private companies have been in contact with Monash University, and they have formed partnerships with large aerospace companies. “It was a challenge for the team and pushed the technology to new heights of success – no one has printed an entire engine commercially yet,” explained Ben Batagol, of Amaero Engineering, which is the company created by Monash University to make the technology available to Australian industry.

The Monash Centre for Additive Manufacturing is playing a key role in technological advancement in Australia. With their highly sophisticated metal 3D printers, they are able to prototype metal parts, devices and machinery for virtually every industry.

“Xinhua and her Monash team have demonstrated their mastery of additive manufacturing in metal,” said Jean-François Rideau, head of R&T at Microturbo (Safran). “The partnership with Microturbo (Safran) is a success story that was recognised last year when Safran gave the team its Prize ‘Innovation for Product and Technology’ for the excellent work carried out in partnership with Microturbo and the University of Birmingham. Monash and AMAERO are already key partners for our new developments and we are keen to have their help in developing new technologies for our future engines.”

Xinhue believes that the aerospace and biomedical industries stand to gain the most by using metal 3D printing like that provided by Monash. Titanium alloys provide for a plethora of uses, whether it is in the production of ultra strong mechanical parts or in the creation of biocompatible prostheses and implants.

The company apparently used a Concept Laser Xline 1000R 3D printer to fabricate the parts for these engines. It has an impressive build envelope of 600x400x500mm, which makes it the world’s largest selective laser sintering 3D printer.