A Toy Unlike Any Other: The 3D Printed Rock Crawler by Richard Swalberg

Toy cars — every little boy loves them. When I was growing up in the 80s and 90s, the toy cars of choice were Hot Wheels and Micro Machines. My brother and I would spend hours on end pushing these little vehicles around our living room, oftentimes losing a few under the couch. Today, not much as changed. Little boys still love their toy cars, and Hot Wheels haven’t lost their appeal. The advent of 3D printing, however, has led to some really creative thinking on behalf of the toy car lovers of generations past.

For one 3D designer, named Richard Swalberg, who also happens to be a lover of toy vehicles, 3D printing gave him a chance to create what he calls the 3D printed Rock Crawler.

“I grew up in Utah where there is a lot of open wilderness, big rocks and mountains,” Swalberg tells 3DPrint.com. “As a teenager, I was interested in off-roading Jeeps and trucks. I used to take frequent trips with my brother and his friends to a really cool place called Moab, which is in the south of Utah. There we would drive on all the off-road trails, and see whose Jeep could climb the biggest rocks or hills.”

Swalberg used his experience to design the 3D Printed Rock Crawler, a toy vehicle unlike anything we have seen before. The toy, which is 3D printed using Selective Laser Sintering technology by Shapeways, is printed in one single piece. It is printed using Shapeways’ White or Black ‘Strong & Flexible’ plastic material, and is available to purchase for just $68. 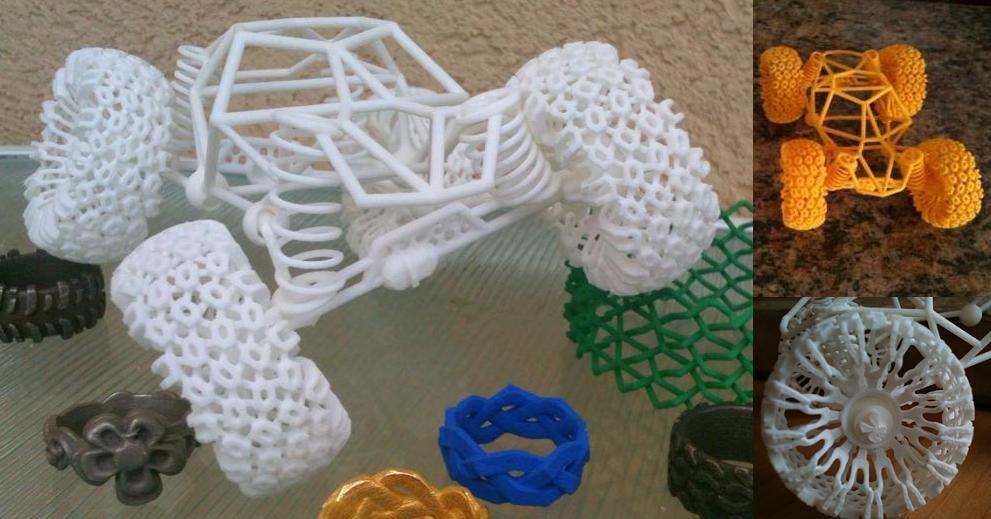 “When I started getting involved in 3d printing, I wanted to make things unique to me, that I knew could set me apart from the rest of the online 3d printing community,” Swalberg explains. “I also wanted to test the possibilities with Selective Laser Sintering (SLS), which allows the model to be printed completely assembled with all its moving parts.” The 3D printed Rock Crawler was inspired by Swalberg’s love for the buggies he frequently saw in Moab. It features an “aggressive” looking roll cage, incredibly flexible springy suspension system, and very unique off-road wheels which spin perfectly even though they were all part of one single 3D print.

To design the Rock Crawler, Swalberg first began by drawing and “doodling” various sketches of the vehicle. He then used Blender to model it in three dimensions. In all, it took a couple months for him to complete. Once he felt comfortable with the model he had, it was off to Shapeways to have it 3D printed. Amazingly, it only took him two iterations to get the vehicle where it is today.

“I really like how simple Shapeways can make the process for someone like me, who only likes to be on the design side, and less on the manufacturing side,” Swalberg told us. “Plus, they have a great online shop that anyone can create, with a huge community.” Swalberg is constantly trying to come up with new designs, and he has several other products offered on his Shapeways Shop, ranging from affordable jewelry to the Triple-P, a Ping Pong Ball Pistol. It should be interesting to follow Swalberg to see what he comes up with next. In the mean time, I will probably be ordering the toy car of the 21st century, the 3D printed Rock Crawler!

What do you think about Swalberg’s design? Is this not one of the coolest toy vehicles you have ever seen? Discuss in the 3D Printed Rock Crawler forum thread on 3DPB.com. Check out the videos of the Rock Crawler below.