Sometimes physical activities which might seem like simple, everyday tasks are more difficult than they appear for some people. A senior at Newton High School in New Jersey, Justin Hermann, is one of those who take notice of the people around him, and Hermann used 3D printing to lend a hand to a fellow student.

Hermann had noticed that one of his freshman classmates was having a hard time opening her locker, and that gave him an idea. He saw that the hallway lockers are designed in such a way that opening them requires a user to pinch the handles and lift them. The freshman in question faced a physical challenge which made that seemingly simple task a real headache.

So under the mentorship of technology teacher Brian Bennington and with the help of junior student Robert Borgognoni, the trio used 3D printers available them in their advanced principal design class to create a plastic handle to modify the student’s locker.

Borgognoni took on the task of designing a plastic cover for the handle in SolidWorks, while Hermann provided the conceptual framework for the project. 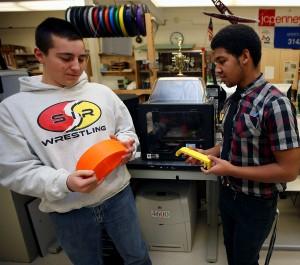 The pair took three weeks to design and produce the final product, and the last iteration of the print took nearly a full day to output.

Hermann said working on the project opened his eyes to what 3D printing technology can do when correctly applied.

Newton High School has a pair of MakerBot 3D printers, and according to Bennington, having the machines on-site allows his students to think differently, and that’s led them to explore new ideas on their own initiative rather than waiting for an assignment..

“For a teacher, that’s like a dream,” Bennington said.

The handle is attached to the locker with a bolt that passes through it, and that allows for the device to essentially bypass the latch.

The design has been in use since the beginning of November, and Hermann and Borgognoni say their classmate simply has to slip her hand in the device and pull to open the locker open. When not in use, the locker stays shut via magnets installed to take care of the job.

Bennington adds that 3D printing solutions haven’t been limited to Hermann and Borgognoni’s project. He says the 3D printers have also produced a trumpet mouthpiece for the music department.

The technology has also provided the students with a vision of their futures after school as well.

For his part, Borgognoni says he plans to pursue further studies in the engineering field.

What benefits do you see to students who get the chance to work with 3D printers as part of their education? Did you have a 3D printer at your school? Talk about 3D printing in education and your experience with the technology in the Students Hack School Locker with 3D Printing forum thread on 3DPB.com.