Could This 3D Printed Folding Knife be Cause for Concern? Looks can be Deceiving 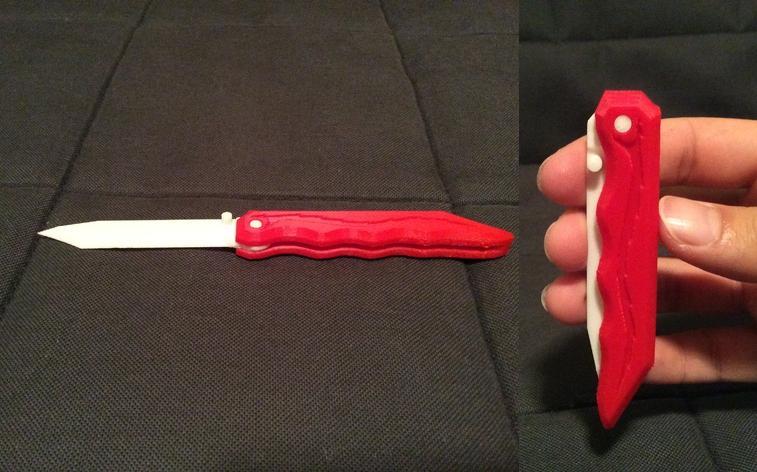 If there is one issue that brings the technology of 3D printing down one notch, besides the potential intellectual property issues that could arise, it would be the 3D printing of weaponry. Even though some would disagree, when it comes down to it, very few people want to live in a world where anyone can 3D print their own weapons. We’ve covered numerous stories concerning 3D printed guns, many of which I admit are quite frightening, and others which I think have a long way to go before causing any threat to anyone other than the shooter.

One question that I hear a lot is: “If you can 3D print guns, what about knives?”

It’s a good question, and although desktop 3D printers print only in plastic and plastic-based materials, you would think it would only be a matter of time before someone devises a way to create a 3D printed blade which is sharp enough to act as a weapon. I came across a rather threatening looking 3D printable knife recently on 3D printing repository Thingiverse, and I must admit I was intrigued. In reality though, this knife is no more than a really cool looking letter opener.  Part of me was disappointed, while the other part relieved.

“The chances of this model being used as an effective weapon are pretty slim,” The designer of the knife, Alex Young, tells 3DPrint.com. “The blade as it is designed is fairly flexible and not very strong. To put it into perspective, your average ballpoint pen would be more dangerous (and less conspicuous) in terms of stabbing power. In terms of cutting ability, you can sharpen the plastic blade, but it becomes incredibly brittle at such thin thicknesses.”

Young, a recent mechanical engineering graduate, first begin designing the knife using traditional graph paper, and it took several iterations before it was ready to be moved into Blender.

“I’m fluent in the fairly technical 3D CAD software, SolidWorks, which is very different from its artistic counterpart, Blender,” Young tells us. “In other words, aspects such as tolerances mating components take a lot more tinkering in Blender than in SolidWorks.”

Young designed the knife to be used as a letter and box opener, although he admits part of his motivation was to create a interesting conversation piece that he and his friends/coworkers could “nerd out about.”

I asked Young about the potential this knife has as a weapon and while he was quite convinced that it would have a very difficult time causing much harm, he did suggest that if it were to be 3D printed using some of the specialty filaments available today on desktop 3D printers, it could conceivably become more of a threat. “The only way I can see this becoming a real weapon is if someone were to print out the blade with a metal-based filament,” he explained. “However, I have no experience in metallic prints, so I can’t be 100% sure of that.”

Without a doubt, this design shows off Young’s design skills, and thankfully he never intended it to be a weapon, nor does it have the capabilities to do so in its current state, printed with traditional PLA or ABS filament. It would be interesting to see what kind of strength this knife could provide, if it were 3D printed with materials such as colorFabb’s bronzeFill, or copperFill or even Proto-Pasta’s new Stainless Steel or Iron PLA filaments. If you attempt to do so, be sure to let us know your results, but please don’t harm anyone else or yourself in the process.

What do you think? Is it possible to create knives that could be used as legitimate weapons, through the process of desktop 3D printing? Discuss in the 3D Printed Knives forum thread on 3DPB.com.