Where is 3D Printing in Gartner’s Hype Cycle?

Gartner´s Hype Cycle outlines five distinct phases of a technology’s lifecycle. We start with the Innovation Trigger, in which media initiates the spread of a technology. Subsequent success stories fuel a Peak of Inflated Expectation. When expectations sour, we end up in the Trough of Disillusionment. After this, the Slope of Enlightenment sees more adoption. Mainstream adoption happens when we reach the Plateau of Productivity. I really like the Gartner model, it’s a useful tool to think through trends that seem to be either glacial or incomprehensibly hectic.

Welcome to the Trough. SPAC binges have turned sour, with even credible SPAC firms now trading in the single digits. 3D Systems (NYSE: DDD) stock is at a 52 week low, even though the company’s pivot toward healthcare and bioprinting is lucid and has been done with aplomb. Materialise (Nasdaq: MTLS), which is a de facto monopoly on the software used for managing 3D printing, is also trading near a 52 week low. The stock of stalwart Stratasys (Nasdaq: SSYS) has halved in a month. Voxeljet’s (Nasdaq: VJET) stock is making the company look remarkably inexpensive. Its market cap is around what its revenues were last year. That’s an insanely low valuation, given that they are profitable and grew by 22 percent in Q4 last year.

Head spinning is the best way to sum up the fall in 3D printing stock valuations. Startup funding has also evaporated. Idle chatter on picking up millions and tens of millions has resulted in desperation for some who missed the gravy train. Indeed, the tens of millions given liberally to companies over the last few years will not quickly be repeated. I told friends to raise A, B and C rounds in one, because we were never going to be this loved again. But, the speed of our fall from grace surprised me. Low valuations of public 3D printed stocks means that funding requests to banks and investors for future potential revenues tomorrow under threat from real inflation today are looking riskier than they used to be. At the same time, exits are under threat through our now-abysmal, public track record. Corporates could have expected an injection of stock market excitement if they made 3D printing investments, but now this effect is questionable. We’re very likely to be transplanted by nanotech or quantum or something newer still as a fountain of excitement for the media. Yes, there are 3D printing stories, but they’re no longer ones where you can the feel bright eyes and wonder shine at you through their words. So, there was a 3D printing revolution, apparently. Not everyone has a 3D printer. In fact, only very few people have one. Of those millions, few use them everyday. A lot of projects and corporate optimism have soured in the face of the limitations of our expensive technology—which hasn’t really improved a lot over the past decade or so. We’re only sparingly utilized in manufacturing. And, if we are used in manufacturing, it’s by a guy who is dusting off parts he just cut off a build plate with a saw. You could perhaps think that we are dawdling in the Trough of Disillusionment. But, do not mind the electric sheep, the poor herds have just their greed and algorithms to guide them. The stock market looks dire and we might be not the flavor of the month with investors generally. But we’re fine. If we look at signals from the market itself, our industry is slowly but surely extending its tentacles into manufacturing and commerce.

We’re a 3D printing evolution not a revolution. We’re slowly but surely catering to the needs of more and more companies in more and more ways. More firms have printers that are being used to duck tape all sorts of problems. We’re solving business problems as they occur. There are instances where the improvisational use of 3D printers to solve crises—to create parts in a pinch—have more than made up for investments into them. AM is becoming standard in the commercial space industry, used extensively in satellite, drone, and defense manufacturing. Our growth in orthopedics continues apace, and that is a revolution that has taken 30 years to happen. I see more and more examples of highly optimized industrial components that are being made with 3D printing and can only be made in that way. AM is growing in popularity in dental, as well, and have been pretty much standard in a lot of jewelry and hearing aid applications. 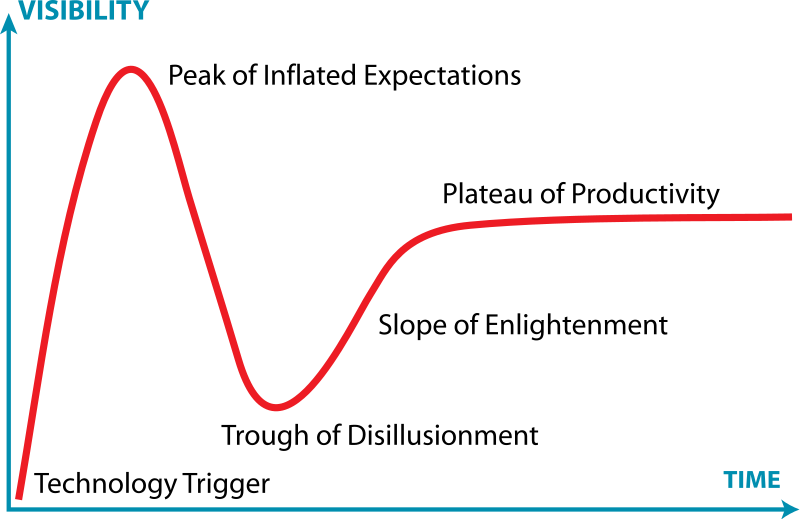 For a lot of applications, 3D printing is actually a very useful technology that shows real return on investment and real value as it grows. Based on the growth I’m seeing in private firms and across the industry, we’re not in the trough. We’re actually very far along the Slope of Enlightenment. Industrial adoption is growing, but perhaps not in the way we’d want it to. This is what may cloud your view.

Now, don’t get me wrong. I’d prefer a kind of Google—where the masseuses are millionaires—kind of a scene. The snacks will be better and everyone will have pools. And I want you to have a pool. I’d hate to see the number of people I know with Lamborghinis stabilize. I’m rooting for you. But, what if we take a step back, and think.

We drank the Kool-Aid, too. Now, we must wake up. We must realize that, just because some journalists started using the term “3D printing revolution” doesn’t mean it’s the right way to think of our technology’s development. A revolution builds and then suddenly changes everything. It breaks, shatters, and divides a timeline into a definitive before or after. No one has printers and then everyone has 3D printers. Did you really think that this was going to happen?

Doctors still write prescriptions on paper. 134 years after contact lenses were first made and 74 years after, LASIK was developed, people still wear glasses. The fastest car in the world was electric in 1899. The first two successful English channel crossings were by balloon, as was the first air crash. The QR code was invented in 1994. However, in Spain where I live, it took a pandemic to make them commonplace… as stickers which link to menus.

Rarely does the world work exactly as a metaphor. Rarely does a technology grow as you think it will. Some of the smartest people on Earth thought that the Segway was going to be “bigger than the internet.” Now it is something that occasionally ferries tourists around. Commonplace though are kids scooters with electric batteries that are used by millions to commute to work.

Dean Kamen, the inventor of the Segway, also developed a revolutionary way to clean water. He sold his invention to Coca-Cola, hoping that the firm would use it to give inexpensive clean water to billions of people. Instead, the beverage giant uses it to power Freestyle machines at your local Five Guys. And not even every fast food place has a Freestyle.

IBM Chairman Thomas Watson often ends up on “world’s dumbest quotes” lists because he said, “I think there is a world market for maybe five computers.” First off, he said this in 1943. Secondly, with cloud computing becoming the norm, he may very well get proven right, in the long run.

In short, we get the future wrong. And thinking of 3D printing in terms of a revolution is incorrect. 3D printing is a virus, not a revolution. 3D printing is something that spreads in a very directed way. We are the perfect method to make a part that solves a problem. If that problem is expensive enough, then we can supplant existing technologies which are more well known and cheaper. For that one perfect host, we are a perfect virus. But, if we try to infect a thousands others we may not take hold. But, for that one we can be everything and all to them, we can define them.