State of the Hypersonics Arms Race: US to Work With Australia and the UK

We’ve previously discussed the pending hypersonics arms race and an effort to close the perceived hypersonic missile gap with China and Russia. It is clear that an arms race in hypersonics is occurring between the US and its near-peer rival China. Today the US, the UK, and Australia have announced that they will make hypersonics together.

The leaders of all three countries announced that,

“Committed today to commence new trilateral cooperation on hypersonics and counter-hypersonics, and electronic warfare capabilities, as well as to expand information sharing and to deepen cooperation on defense innovation.”

This is partially in response to China’s perceived advanced hypersonics capability and Russia’s claimed use of hypersonic weapons. The US just announced that it has tested a hypersonic weapon in March. The US flew the Hypersonic Air-breathing Weapon Concept (HAWC) off a B52 bomber for several minutes. The US alone will spend over $4.7 billion on hypersonics in the 2023 budget.

Is the US behind in Hypersonics?

We don’t really know if this is true. However, the US perceives that it is behind and this, as previously stated, is a good way to get the US government to leapfrog other people in their capabilities. Without irony, the US government refers to a Sputnik moment in hypersonics development by its adversaries. For years, the US thought it was behind Soviet Russia in missiles and thought there was a missile gap. This time around, it may also be imagined.

Both China and Russia claim or indicate that they have higher performance vehicles, which is deemed possible by China and improbable by Russia. Russia air launching a hypersonic missile. In their case, they use a Kh-47M2 Kinzhal, which is a 9k720 Iskander short-range ballistic missile strapped to a fighter jet. ICBMs and other missiles are already capable of hypersonic flight. So Russia is playing with semantics here rather than technology. The country was working on the Avengard vehicles previously that were true hypersonics. What China and the US are trying to do is manufacture a Hypersonic Glide Vehicle, which Russia’s Kinzhal is not. The Chinese DF 17 carries a DF ZF hypersonic glide vehicle that could fly at Mach 5 and renter the atmosphere at Mach 10.

What is a hypersonic glide vehicle?

An HGV is a powered maneuverable craft capable of controlled flight that can be launched into space, orbit, and renter. Think of it as a bad shuttle. Rather than go in big predictable arcs like ICBM’s, HGV’s can orbit, enter suddenly and at high speed, making a fast direct approach to a target. Therefore, it can avoid a lot of space-based interceptors and outmanoeuvre other missile defense systems at high speed.

Sure, ICBM’s are fast, but they are predictable. On the other hand, HGVs can manoeuvre, change trajectory suddenly, and travel at extremely high speeds. Current stage technologies have no reliable interception solution for HGVs. Indeed the US Next Generation Interceptor missile defence system, which it hopes to deploy in 2028 at $78 billion, probably cannot deal with HGVs. By being manoeuvrable and unpredictable in space, in the lower atmosphere, and close to the earth’s surface, HGVs could reign supreme as a targeting solution to deliver warheads or simply work through the immense kinetic energy created by a thing going into you at Mach 10.

HGVs could loiter, ready to pounce or be launched, and come down anywhere on earth in an hour or two. They can also be used as satellites to be delivered quickly to a location to jam, catch signals or communicate. They could also be used as launch vehicles for satellites or be used to kill satellites. HGVs are the high ground.

How can the US be behind in hypersonics?

The US has been busy with wars in Afghanistan and Iraq and has spent inordinate amounts of money on weapons systems needed for those battlefields. The US will also spend over a trillion on high-tech projects such as the joint strike fighter in an attempt to reign supreme over the modern battlefield. The US defence establishment is also notoriously inefficient, with cost overruns being the norm. With its war in Iraq costing nearly two trillion and the war on terror costing $8 trillion overall, the country has poured money into blood and sand while China has upgraded its military.

In fact, China has spent its money in a directed way to be able to negate US naval and air power. The nation is most interested in being in control of its own sphere in south east Asia, in being able to resist any attempts at a US invasion, and ultimately taking Taiwan comfortably while beating off the US. Subsequently, the country will try to rise to become the world’s unipolar superpower. These narrow immediate goals contrast significantly with the US global war on terror-global policeman spend, which focuses on different training, kits, specialised gear, and capabilities. Generally, China has an advanced manufacturing capability that is much less expensive than and faster than the US. Therefore, it is cheaper to make things in China, like missiles or iPhones, which means a cost advantage. Also, for the US, China is increasingly becoming “the worry,” but it still is one of many other things the country has to be concerned about. Thus, China can develop these weapons with more focus in a more economical way.

What will the US do to catch up on Hypersonics? Currently, with the HAWC, it is working on commercialising scramjet technology. This is a supersonic combustion engine where the speed and motion of the vehicle compress air supersonically in a convergent-divergent nozzle where it and fuel are combusted. The US has been working on scramjets since the 1960s. Public concepts such as the Boeing Waverider have gone to Mach 5 and over speeds but reportedly only for a few seconds or minutes.

Why is 3D printing important to hypersonics? 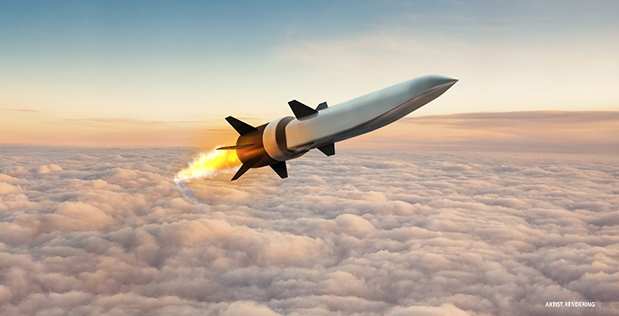 With 3D printing, you can save weight which is very important if the materials are expensive and cutting edge. If these materials are difficult to cut, then they are also likely to be good candidates for 3D print inexpensively. Reducing part count can make these vehicles more efficient to develop and deploy. 3D printing will also let you have a better buy to fly. As NASA has shown, these vehicles will be cheaper and faster to develop with 3D printing than casting and forging. They will also be more affordable to iterate.

Cooling is supremely important on these vehicles, and optimised heat sinking, cooling, and structures will outperform those made conventionally throughout. Optimised structures are especially important in the engine and throughout such a craft, and with 3D printing, we can make the best textures and properties throughout. We are the technology that can be used for much of this vehicle to allow you to make an integrated solution that is optimised for the task quickly.

What is the outcome of the current announcement?

This is excellent news for CSIRO, Australia’s national research agency on many topics with a significant role in 3D printing. This is fantastic news for Titomic, an Australian firm that uses cold spray to 3D print. Another Australian firm Spee3D will also benefit from this. It is excellent news for GE and Renishaw, whose powder bed fusion technologies may be tapped to make these parts. Finally, it’s great news for Lockheed, Boeing, Raytheon, and Northrop Grumman, who all have made major investments in 3D printing and have been working on hypersonics for decades.

We’re seeing a new alliance form specifically between Australia, the UK, and the US on the back of a submarine deal between the three. This is distinct from NATO and the Five Eyes alliance, which traditionally has been the US’s closest friend on spy and secret stuff. Both New Zealand and Canada were either not asked or did not want to play the hypersonics game. This is a shame, especially since Canada and the US share a continent and could cooperate significantly on missile defence. It does not include any EU members and would be an effort independent of Europe.

On the whole, this goes significantly towards making the UK relevant again on the world stage. In that light, it will also be suitable for BAE. It may be good for Cobham and other UK contractors as well.