Industrial 3D printing system manufacturer voxeljet (NASDAQ: VJET) issued a fourth-quarter mixed earnings report with a slight increase in revenues that missed expectations and net losses that beat analysts’ estimates. Along with the earnings, announcement voxeljet said it’s teaming up with materials company Covestro to develop a seamless material-process solution for volume manufacturing of specific large-series AM applications and presenting its High-Speed Sintering (HSS) Material Network for the qualification of new polymer materials, among other research initiatives.

Based in Germany and Michigan, voxeljet offers high-speed sintering and universal jetting technologies specially developed for industrial use and services for large components or runs. The company said revenue from the sale of 3D printers slightly decreased due to the lower number of sold units in contrast to the comparative period in 2020. During the quarter, voxeljet sold one used and refurbished 3D printer, compared to two used and refurbished 3D printers in last year’s same period.

Otherwise, customers for voxeljet’s services segment increased 9.9%, mainly due to significantly higher revenue contributions from its voxeljet America subsidiary, which reflects a faster economic recovery from the Covid-19 pandemic and a substantially increased demand from the region. In comparison, the German services operations and the Chinese subsidiary remained at similar levels as 2020. Unpacking large impeller: even large-volume parts such as impellers or, as planned in the case of Brose, door modules can be produced in one piece with the VX1000 HSS. Image courtesy of Business Wire.

Accounting for both the systems and services segments, revenue for the quarter ended September 30, 2021, was €4.9 million ($5.6 million), slightly up 0.6% from last year. As previously described, the company is making steady progress with its systems and services sales. As a result, however, it posted a mixed earnings report with net losses of  €800,000 ($910,000) or 12 Euro cents per share.

Nevertheless, this was described by the company management as an “improvement in the bottom line” resulting from renewed operational performance and better gross margins. In fact, net loss for the third quarter of 2021 was up compared to the losses incurred in the same period in the prior year, when net losses reached €4 million ($4.5 million), or 82 Euro cents per share.

During the quarter, voxeljet began work on several R&D projects. First, the business is making steady headway with its VJET X technology for additive mass production of sand cores which is currently available. In fact, the company hopes a premium German carmaker to be their first customer. Second, voxeljet is developing the high-speed sintering system, which it expects to be the “industry’s largest polymers sintering 3D printer.”

Amid an earnings call with investors, voxeljet’s CEO Ingo Ederer said other research projects include a deal with GE Renewable Energy to develop the world’s largest binder-jetting 3D printer for offshore wind turbine applications and new beta programs with Covestro and Brose, a multi-national active in the automotive industry.

The new 3D printer for GE is expected to streamline the production of key components of the brand’s Haliade-X offshore wind turbines, which are among the world’s largest and most efficient units of this type and can capture more energy production than any other offshore wind turbine, even at low wind conditions. With this project, voxeljet could access the global offshore wind capacity industry, which the International Energy Agency has anticipated will increase 15-fold by 2040, becoming a $1 trillion industry. As for the new printer, it will probably be four times larger than any of voxeljet’s largest printers to date.

The large-volume build envelope of the VX1000 HSS is suitable for the series production of small components such as these spray water distribution nozzles. Image courtesy of Business Wire.

Alternatively, with Covestro and Brose, voxeljet is giving them early access to its program for the VX1000 HSS. This new 3D printer has a significantly larger build volume and a much faster print speed than previous systems, enabling true series production of polymers. The plan is to start beta programs for different material sets and applications. Specifically, with Brose, voxeljet will work with PA12, and with Covestro, it will focus on material-machine combinations for serial production of polymers such as TPU.

As part of the deal with Covestro, voxeljet will contribute its knowledge of the large format VX1000HSS printer platform and Covestro, its expertise in designing functional materials, to jointly develop a seamlessly working material-process solution that can be deployed for large scale manufacturing. 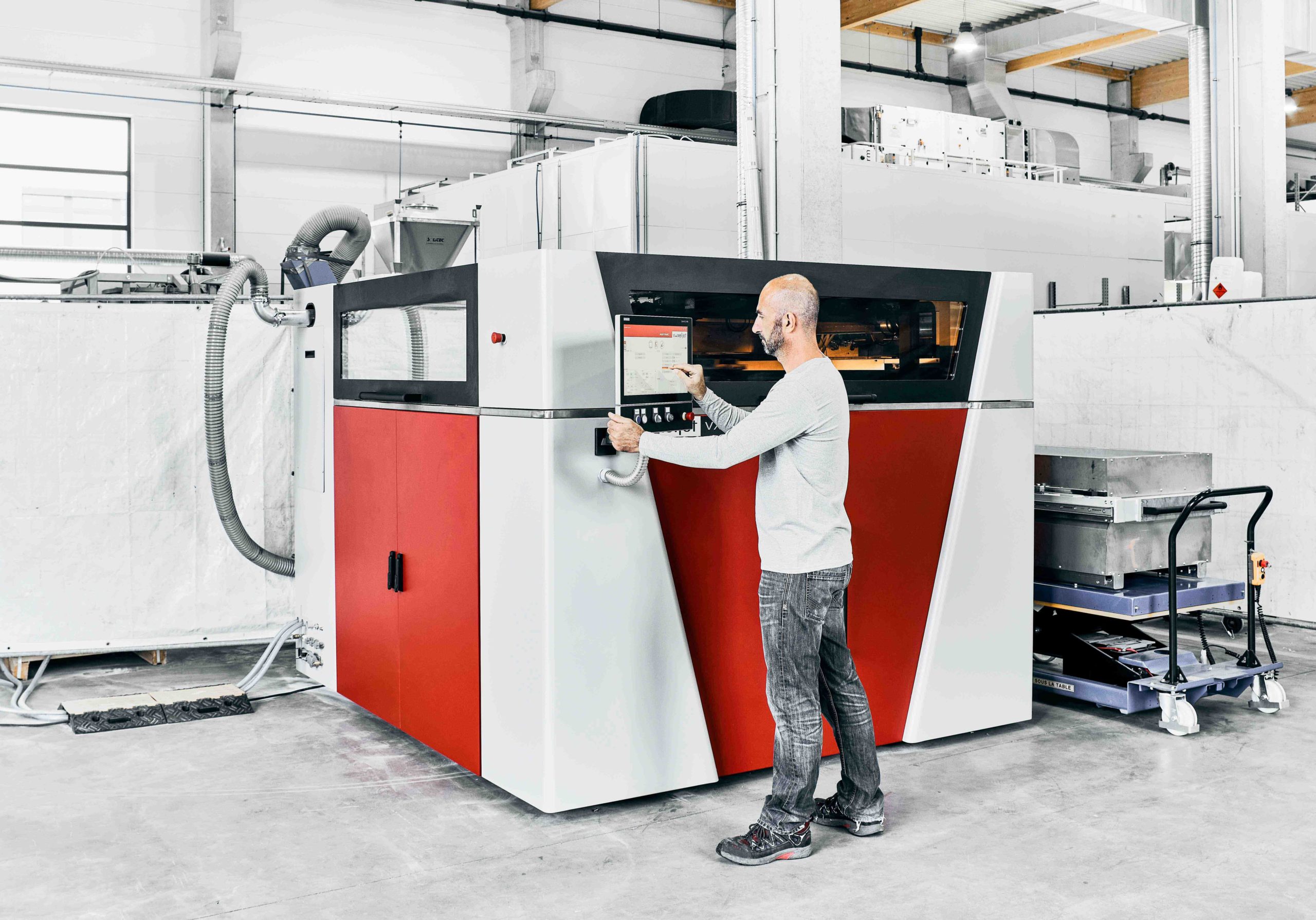 The VX1000 HSS from voxeljet is a high-performance 3D printer for processing polymers. Image courtesy of Business Wire.

Voxeljet’s Global Director of Polymer Sintering, James Reeves, said the potential of HSS to process specialty powder materials is tremendous. Furthermore, he believes that the company can accelerate its access to pioneering products by offering customers material choices.

“Typically, material and processing technology work separately in the value chain, with customers having to figure out how to make them work,” explained Geoff Gardner, Innovation Director Additive Manufacturing at Covestro. “Together with voxeljet, we want to remove what we believe is still a barrier for adopting AM on the production floor. Thanks to its size and speed, coupled with the constant layer time, HSS offers manufacturers an economic solution for series production.”

With so many projects on the pipeline, it’s difficult not to see a growth path for voxeljet. As for the future, the company said on the call that revenue for the fourth quarter of the year is expected to be between €9.25 million ($10.5 million) and €10.75 million ($12.2 million), which would equal full-year sales of close to €22.5 million ($25.6 million) and up to €27.5 million ($31.2 million). Although Ederer refrained from giving any guidance for 2022, voxeljet Chief Financial Officer Rudi Franz said he is sure of the business’s growth potential, which is currently in the range between 10% and 20%.